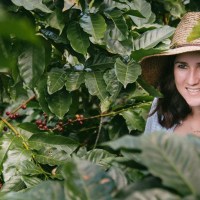 Katia Duke spent her childhood in coffee fields, breathing in the smell of beans, watching her father lead a farm more than 860 acres in Copan Ruinas, Honduras. As she’d listen to the sounds of workers harvesting coffee cherries, watching their hands work, she wondered what it would be like to become a farmer herself.

Katia grew up knowing her parents sold everything, investing all they had into their farm, Finca San Isidro. Her family, following in the familial footsteps of generations of coffee farmers, was dedicated to producing coffee, raising livestock, preserving the forest, and promoting rural tourism.

But year by year, the effects of climate change became hard to ignore. Coffee, corn, and bean crops were destroyed by prolonged summers and flooding.

“In 2012, things changed considerably. The effects of climate change destroyed 70 percent of our plantation and after being a source of employment for around 500 people the number was reduced to 80. This phenomenon made us rethink our production system,” Katia says.

Katia studied agronomy in college. After learning about specialty coffee, she rethought the traditional production system she grew up seeing.

“The differences in thoughts began to appear and this is where there is a separation in the production systems that correspond to my father and mine,” Katia says.

Fulfilling her childhood dream, Katia now runs a farm of her own from a small parcel off of her father’s land. But she does it in her own way. Merging her passion with a belief that when one of us rises, we all rise, Katia brainstormed a new way to farm, focusing on specialty coffee.

“My coffee carries with it the story of many hands that participated from beginning to end.”

Katia migrated from conventional, chemical-laden production systems to eco-friendly farming methods, incorporating a cover of soil and shade to protect biodiversity, teaching farmers how to tend to small, well-assisted plots.

And those farmers hold a special place in her heart.

As someone who has experienced gender inequality in her profession, she intentionally hires women in her community, providing consistent work to those who otherwise might not have it. And since specialty coffee needs more time and care to cultivate, workers typically earn wages for two months longer than those working for conventional coffee farms.

And she even built a school on her farm for 40 local children to provide access to education.

“At first, we thought that the school would be a space for our workers only, but we cannot deny the gift of knowledge to any child—we have children attending classes that belong to other communities,” Katia says.

“What makes my coffee really special is the sum of several elements. First of all, the people, this part that becomes invisible when you’re in front of a cup of coffee but without their participation, this would not be possible,” Katia says. “Soil conditions and microclimate are fundamental but they are only part, it requires a lot of care, innovation in process, before and after its collection, my coffee carries with it the story of many hands that participated from beginning to end.”

Despite changes in climate, despite the way it’s always been done, Katia continues to stand in her fields and see a different way. Every intentional hire, every gently-harvested plant is an act of peacemaking, working together to bring hope and healing to her community in Honduras, and to the world.

Preemptive Love is teaming up with La Terza Coffee Roasters to offer a high-quality, single-origin coffee from Katia’s fields. Proceeds from this coffee will benefit the work you’re making possible on the US-Mexico Border, while also supporting local Hondurans.