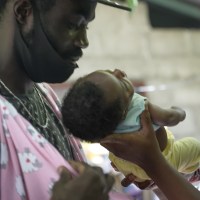 “So yeah, we’re on our way to see where our migrant friends were crossing” Haniel explains, as he drives toward a murky river, lined with tall grass. “And unfortunately we saw the military national guard with several of our migrant friends that they just caught.”

Where were the national guard officers taking the asylum seekers?

“They take them to a shelter/jail,” Haniel replies.

On the day we witnessed the National Guard snatching up migrants, there were over 10,000 migrants a day coming across the Guatemalan border into Mexico. We brought along video cameras to visit our work in the city of Tapachula in southern Mexico, to show you what is happening.

It seems like no country wants anything to do with these families of asylum seekers, desperate for a safe place to call home.

For those headed north from South and Central Americas, the Mexican border is the first border where they have to officially ask for asylum.

“What’s going on right now is that the government is delaying their process,” Haniel stepped through the complicated situation asylum seekers find themselves in. “They used to be able to take a month or two months to seek asylum. But now the government is making them wait from six to a year. Or even two years. And this is causing them to feel frustrated because the government doesn’t provide any job opportunities. They don’t provide any income for them, or they don’t even provide them with food or anything.”

“They’re very frustrated because they’re not allowed to leave this place,” Haniel continues. “But again, they don’t have opportunities.”

Preemptive Love is here, at the southern Mexico border, with food, water, medical supplies, and a place to rest at a safe house.

We’re here helping migrants waiting for their visas in Tapachula by providing food. This way they don’t go hungry if they don’t have money or a job.

Because jobs are hard for asylum seekers to find, we’re helping local partners expand a farm. Asylum seekers can work there, and most of the food grown goes to the local shelter where they stay.

Some migrants go north to the US-Mexico border, so we launched a tech bus to provide IT and English language training. That way, asylum seekers can get ready for their future lives in Mexico or the U.S.

We’re standing with asylum seekers wherever they are along their journey, showing up with what they need.