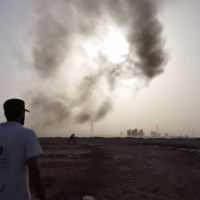 “The first airstrike hit us. It was too close… we were running, running. We didn’t know what to do.”

It was supposed to be a normal aid delivery… if there was ever such a thing as “normal” in last year’s battle for Fallujah.

We saw families risk everything—being shot by snipers, drowning in the Euphrates River, being blown apart by landmines—to escape ISIS’s grip on the city. We saw children stumble into the desert where there was almost nothing waiting for them—in some cases, not even a tent. We saw men and boys separated from their families and detained in prison-like conditions, automatically suspected of affiliation with ISIS.

But we did not expect, one year ago today, that our team would come under attack—not once, but twice on the same night.

Last June 28, our delivery team was making its way along a heavily rutted dirt road, carrying 100,000 pounds of food toward one of the most underserved camps in Iraq, when both aid trucks got stuck. As night fell, it became clear—they weren’t going anywhere soon.

Our team decided to split into two—one group headed for a military checkpoint, racing against curfew, while the other stayed with the trucks to make sure none of the aid was stolen during the night.

We were told help would arrive within the hour to rescue our stranded team. But that help never came.

Later that night, a massive ISIS convoy tore across the desert, attacking as they went. Part of the convoy—around 80 vehicles—came upon our trucks, close enough to be heard talking on their cell phones while our team hid themselves in the dirt, praying they would survive the night.

Then a burst of gunfire, as a military helicopter took aim at the ISIS convoy, destroying many vehicles and forcing the rest to flee.

But the night wasn’t over.

The other half of our team was spending the night on a concrete slab outside a military checkpoint between Fallujah and Baghdad. The whole area was on lockdown because of the ISIS attack. No one was allowed through the checkpoint. Our team was stuck—vulnerable and exposed.

“We ran back to the checkpoint,” one of our colleagues, Ihsan, recounted the next day. “We told them, ‘We are about to be killed. Please let us be close to you!”

Instead, the soldiers raised their weapons. “If you make any step,” they warned, “we will shoot you. Just go back.”

That’s when the second airstrike hit.

“It was so close, it threw us to the ground,” Ihsan said. “All the debris was hitting me… I was thrown on the land.”

Over the phone, we heard their heart-sinking plea: “God help us—they are bombing us now!” Then the line went dead, and we started calling everyone we knew. We tweeted their last known coordinates to the U.S. military command in Iraq. We waited… and we prayed.

Back near the checkpoint, Ihsan lay on the ground, his cell phone battery dead. He and his colleagues braced for a third airstrike. “It was so scary,” he said later, “because we have this saying here in Iraq: third time, never miss.”

It was one of the longest, most difficult nights many of us at Preemptive Love have ever known—especially for our friends who were caught up in the attack. Amazingly, everyone survived. Hours after the ordeal began, a car finally pulled up and took our team back to Baghdad.

The trucks were dug out and returned as well, still carrying 100,000 pounds of food.

But the most incredible thing is what happened next: our team went back.

Two days later, they returned to install water tanks in a refugee camp west of Fallujah.

A short time after that, the same trucks—carrying the same food—rolled out again, this time reaching one of the remotest camps in the area. More than 1,000 families got long-lasting food packages that day.

A short time later, our team brought food, water, and clothing to imprisoned detainees—those who’d been separated from their families for fear that some of them might belong to ISIS. A member of our team, Sadiq, recognized one of the detainees—one of the few confirmed ISIS members among the group. Sadiq crouched low as he gave the handcuffed man a drink of water and said, “You killed my friend. But I’ve come here to feed you.” A few nights earlier, Sadiq had crouched in the desert near our trucks, hiding from the ISIS convoy. He risked his life to protect the food that was meant for fleeing Fallujah families.

And when the battle was finally done, when the first families returned to Fallujah, our colleague Ihsan was there to welcome them home with gifts of food and other essentials. He was nervous, he admitted. But his love for the people of Fallujah kept him going. “I want to see them go home,” he said.

Because that’s what love does. Love keeps showing up. Even when it’s dangerous. Even when the bombs fall and the bullets fly.

Love is not careless or naive. Love takes stock of the risk. Love acknowledges the fear. But love is not deterred by risk or fear. Neither are we—and neither are you.

Since that day last year, you’ve gone with us as the battle turned north toward Mosul. You’ve showed up on the frontlines again and again with life-saving food, water, and medical care. Even now, as Iraqi forces battle for Mosul’s Old City—with up to 100,000 civilians trapped inside—you are providing food just a few streets away from the fighting.

Fallujah was not the last time our team risked death to provide aid on the frontlines—we’ve been targeted by ISIS more than once while distributing aid in and around Mosul. But that won’t stop our team—and it won’t stop your love.

Thank you for standing with the people of Fallujah, Mosul, Aleppo, and so many other war-torn places. Even when it’s scary. Even when it’s dangerous. Your love is loud and strong.