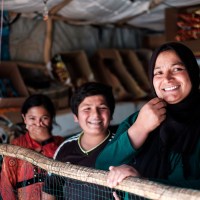 In most Iraqi families, the man of the house is the primary breadwinner. So when Ibtisam’s husband’s health declined badly enough to stop him from working, their family lost its income.

They had no choice but to borrow money to survive.

Borrowing often kicks off a vicious cycle of long term debt, especially when jobs are hard to come by in a climate of high unemployment. This is much exacerbated in a camp environment, where thousands vie for a handful of opportunities. This is the situation for far too many displaced lraqi families like Ibtisam’s, who lost everything during the war with ISIS.

Ibtisam was very quiet during our initial meeting with her and her husband, letting him do most of the talking. But when she did speak, she spilled her dream: she had always wanted to own her own business.

She’d clearly given some thought to what would be a viable business opportunity in their particular block in the camp: a produce and food store. She then gave us a list of everything she needed.

And then, she revealed that she already had a small space ready for her future store, across the street from their home.

Ibtisam was so ready to get to work!

On the grand day that her shop opened, Ibtisam greeted us with an enormous smile on her face. Gone was the quiet, reserved woman we’d met the first time. She was keen to talk, answering every question with gusto.

The family had been depending on dwindling aid stipends since they came to camp in 2015. The debt they owed was mounting, and the situation looked bleak.

Then you gave her family a lifeline.

Now, with this business, Ibtisam is not only bringing in an income, but she is doing something she has wanted to do for such a long time. She’s immensely proud of her shop and is determined that it be a success.

And in a few short months since the start of the business, she’s made it so.

She’s been fiercely disciplined with her profits: all the money that doesn’t go into daily expenses, restocking, or paying off debt, has been going into a locked box that she has not opened for 6 months! Her debt is more than 60% paid off, and she’s now looking for ways to add to her inventory now that she can consistently afford the family’s daily needs.

The shop has given Ibtisam the confidence of long term stability, and with it, invaluable peace of mind.

This is what you do when you say “yes” to small business grants: you help entire communities work towards better lives.

Help our displaced friends rebuild their lives. Give today.