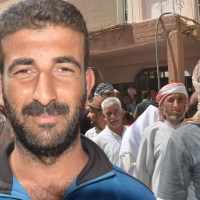 In the summer of 2014, ISIS seemed unstoppable.

The swept across Iraq, capturing city after city. Some cities fell easily while others resisted, but all of them fell eventually—except for one.

That city is defiant Haditha, and this is the story of your defiant love. After ISIS surrounded the city and laid siege to it for over a year, many residents were losing hope. People were starving.

Some were selling their cars for just one bag of flour.

Then you did something amazing, sending our staff and partners on a daring airdrop mission to provide the city with the food and water it needed to hold out.

Today, there are more besieged, starving cities across the region as militaries and militias attempt to punish entire populations by cutting off supply routes.