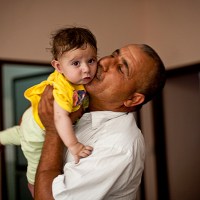 Father’s Day began with an underdog.

His name was William Smart, and his wife died during the birth of their sixth child, leaving him to teach, protect, and love their family on his own.

Twelve years later, Smart’s eldest daughter advocated for a celebration of fathers in gratitude to her own dad—and on June 19, 1910, she succeeded.

The first Father’s Day acknowledged a man who worked to love despite a lack of resources, who jumped into a messy situation despite the odds against him and chose love anyway.

The first Father’s Day celebrated the message of preemptive love.

This Father’s Day, we celebrate you—you who have fought for love in the midst of heartache, you who have been the underdog, you who have chosen to teach, protect, and serve even it seemed like you were the only one making that choice.