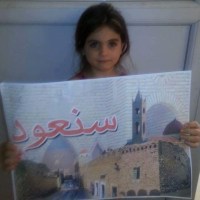 The girl in this photo grew up just outside Mosul, the largest ISIS stronghold left in Iraq.

Shortly after capturing Mosul in 2014, ISIS set their sights on her community, Qaraqosh. Most of the 50,000 people who lived here are Assyrian Christians, including her.

Christians in Iraq endured years of harassment and persecution at the hands of ISIS, long before the world started paying attention. Some Christians had their property confiscated and looted. Others were killed for trying to sell their land.

In July 2014, ISIS attacked Qaraqosh. When they were repelled by local militias, ISIS cut off the town’s water supply. They imposed an embargo to isolate Qaraqosh from neighboring Muslim communities that used to trade with it.

The following month, forces defending the city withdrew. The people of Qaraqosh were alone. ISIS entered the town as the population fled. Many were forced to walk 50 miles on foot to reach safety, leaving everything they had behind.

This girl was one of those who fled.

More than two years later, ISIS is being pushed back. They still hold Mosul and Qaraqosh, but their territory is shrinking. And this girl—she has hope. The poster she’s holding is a picture of her town, with a simple message scrawled across the top:

We will be back.

Most refugees who flee violence—whether they are Christian, Muslim, or Yazidi—they want the same thing you or I would want if we were in their position. They want to go home. They want to rebuild their lives. It’s a long and difficult road… so let’s walk it with them.

When displaced children like this girl say, “We’ll be back,” let’s be the people who say, “Yes. And we’ll go with you.”