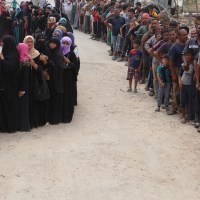 You can feel it in the air in this part of Mosul, the desperation.

While we were here distributing food the other day, two conflicting realities played out before our eyes: Iraqi forces declaring victory in Mosul on the one hand, while on the other hand bombs continued to fall and ISIS continued to attack.

ISIS losing territory does not equal the defeat of terror. Nowhere is that more evident right now than here in Mosul.

As far as we could tell, this particular neighborhood has been severely underserved—without food, without water. ISIS had a serious stronghold, and it’s clear they put up an intense fight on these streets.

You could feel the tension on all sides, as civilians clamored for food—for many of them, it was the first food they had to eat in days. But you could also feel the tension among the Iraqi forces who escorted us in.

Don’t go there. They don’t deserve to be fed.

This place has a bad reputation.

Soldiers would tense every time a woman approached, wearing loose-fitting clothing designed to protect their honor, but also capable of concealing a bomb. In recent days, several female suicide bombers have detonated themselves among families who are trying to escape.

The other day, one woman approached Iraqi security forces while holding her baby in one arm and a detonator in the other. As she passed by, she blew herself up—killing her and the baby, and injuring those around her.

#Mosul: New footage shows #ISIS female suicide bomber hold baby in one hand and detonator in another hand moments before blowing herself up. pic.twitter.com/z4Fpv2WHRZ

Security forces were on edge. The desperation here is real—and you could feel it on both sides.

But we’re not here because it’s safe.

We didn’t come here because we can be 100% certain there’s no guilt here, no complicity, no evil.

We’re here because we actually believe that somewhere in the midst of this—not just somewhere “out there” in eternity or in some other world, but right here, in the streets of Mosul, in all this desperation—is the “more beautiful world our hearts know is possible.”

We want to build it here in Mosul today. We want to bring it to the people surrounding our aid trucks. We want to see it unfurl in their midst.

Thank you for sending us in with love. Thank you for being the kind of people who don’t just serve those who are deemed “innocent,” but who love across enemy lines, real and imagined.

It’s not just what you do. And it’s not about who they are. It’s about who you are.

We couldn’t do this without you—and we wouldn’t want to.