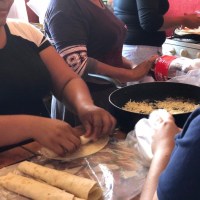 A group gathered to make dinner, the air filled with the smell of saucy beans and toasting tortillas, and the background buzz of children running through the room. Conversation ebbed and flowed around the simple directions being called out to keep the assembly line moving.

Dinner was not just being made for everyone in the shelter. The residents, refugees who fled home from all across Latin America, were making enough food to take to another group of refugees in an even worse situation—those living in tents in a nearby park.

Generosity comes naturally to most of our refugee friends. These friends sheltering in Mexico are no different.

Imagine yourself in this kitchen for a moment. How does it feel to picture yourself there among these friends?

Now what if I told you that many of them are part of the LGBTQ+ community? Does that change how you feel?

If you view the world primarily through an American lens, you may assume things have largely gotten easier for the LGBTQ community in recent years. Same-sex marriage is now legal in all 50 US states. And because of a recent Supreme Court ruling, most employees in the US can no longer be fired for their sexual orientation or gender identity.

But throughout much of the world, the situation is very different. Especially if you’re an LGBTQ refugee. They are doubly marginalized. They are fleeing not just violence and war in their home countries, but also an all-too-real—and sometimes all-too-lethal—threat to their very being.

For many of our friends who have taken shelter in Mexico, fleeing home was their only way to stay alive.

Coming out as LGBTQ can be a fraught time for anyone in the community, including Francis. Francis’ dad is a pastor in a country known for machismo, and Francis was coming out as a transgender woman.

“To be quite honest, one feels really frustrated not being accepted by the world for who you are. Especially in my country, you feel honestly repressed all the time. Either by the people or the maras [gangs in Honduras], because they’ll kill you. Or by the church, because they confine you to these boxes—you have to be heterosexual in order to be accepted. So it feels pretty bad. Yeah.”

The boxes we create, the ones that define who is worthy of love and acceptance and who is not, so often have a rigidity that tears people and communities apart. Francis’ father lost his position in the church when it learned that he has a transgender child. He lost his ranking in the community.

Francis, meanwhile, lost home. Francis left after losing hope that everything would go back to the way things had been. That hasn’t happened. The stain of “less than” that was poured out onto Francis by the community ran onto Francis’ family too.

For others, coming out meant risking their lives. They lost family and friends, careers, and community. Some survived attempts on their life before they finally decided to flee.

Latin America is far from the only place where it’s dangerous to be part of the LGBTQ community.

Sarah Hegazy ended her life on a cool Saturday, earlier in June. She was a refugee, living in a safe country—Canada. Sarah also happened to be gay.

Sarah didn’t kill herself because of her identity. No, that was a part of herself she loved. But the moment she raised her arms at a public concert in her home country of Egypt, clutching the corners of a rainbow flag and raising those bright colors above the crowd, she was in grave danger. She was arrested and imprisoned, and during that time was alternately raped, tortured, and put in solitary confinement. When she was finally released from prison, she made her way to Canada to start life again.

In the hand-written note she left behind, Sarah said:

To my siblings—I tried to find redemption and failed, forgive me.

To my friends—the experience [journey] was harsh and I am too weak to resist it, forgive me.

To the world—you were cruel, to a great extent, but I forgive.

We didn’t know Sarah, but we know beautiful people like her, in every country where we work.

Refugee stories around the world are complex. We design our work to meet each situation and context. But our posture is consistent and simple: we belong to each other.

We stand with those who are told they don’t belong.

And for Francis’ community in Mexico, we create home. Places to be safe. Places to feel free. Places to have a sense of normalcy. Places to gather their courage until they’re ready for the next step in their journey.

Will you join us as we work to provide safety and shelter for LGBTQ refugees?