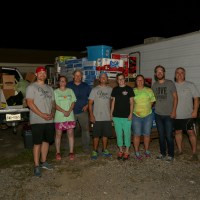 Our world revolves around convenience. But making peace is almost never convenient.

That was one of the mixed-up thoughts that crossed my mind at 10:30 pm, waiting for the truck to arrive, sitting in Charisse and Jerry’s front yard.

We were in Vidor, Texas, a 90-minute drive outside Houston, and everything was very… Texas.

I was sitting on a tractor, surrounded by trucks and trailers, listening to stories told with thick Texas accents about what happened when Hurricane Harvey hit this community. Five dogs were barking incessantly in the background at the small group of us that had gathered to unload supplies, but I don’t think Charisse could hear them. She was too busy bouncing around the yard clapping her hands in excitement—I swear that woman is more energizer bunny than finite human being.

Everyone had other things to do. But instead, we were here. Waiting in the dark for a truck from Pennsylvania that had driven 24 hours straight to deliver these supplies, to this place, for these people. 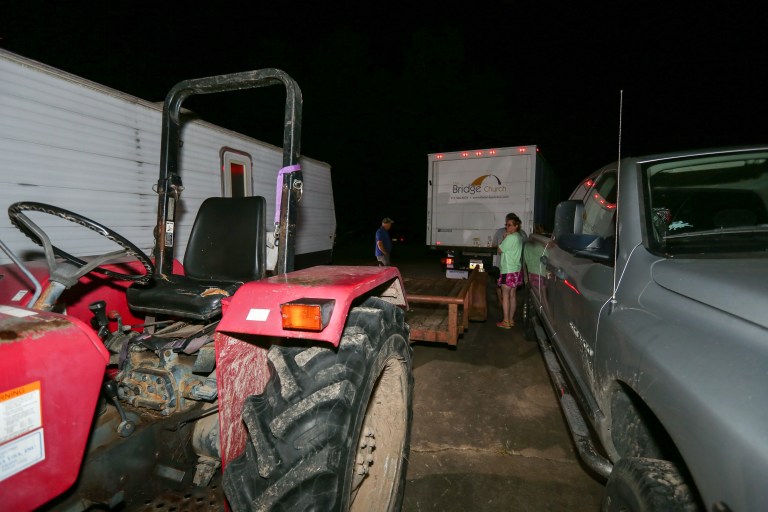 Vidor was hit hard by the storm.

Their homes and schools were underwater for over a week. By the time they could even muck out their houses, all the tools and supplies in Houston were gone. Sold out for miles in every direction.

It was a desperate and overwhelming situation, but Charisse refused to be daunted by it. Even after her church refused to help—it was just too much work and deeply inconvenient—she was determined as ever to get her community what they need to start rebuilding.

So she did the only thing she could think of. She started cold-calling churches in nearby cities to see if they would help. She literally just picked up the phone and started asking churches in Waco and Austin if they would do her a solid and bring supplies over to Vidor. It was bold. And unlikely to work. And deeply inspiring.

But one of her calls was to a Waco church attended by a Preemptive Love staff member. The church knew we were responding to Hurricane Harvey, so they put Charisse in touch with us and we took down a wish list of all the supplies that she wanted. 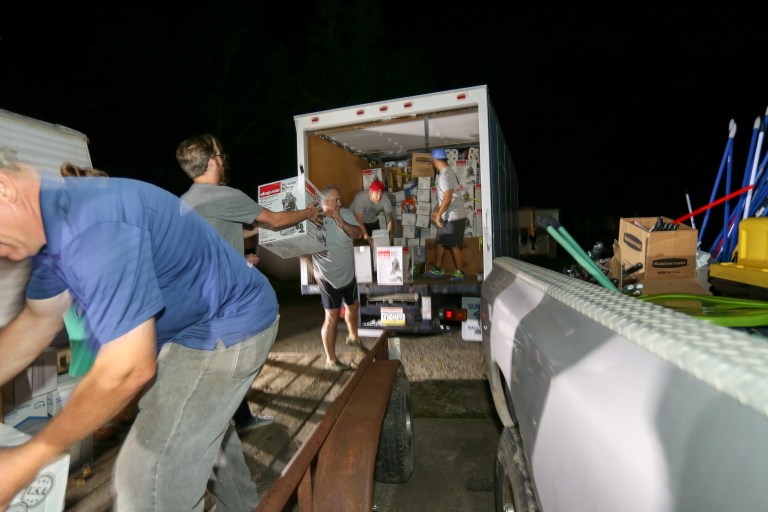 Later that same day, we received another call from Justin Douglas, the pastor of a mid-size church in Pennsylvania. They wanted to do something. Anything. What did we need?

“A truck full of supplies for Vidor, TX… here’s the list. It’s a lot, so don’t feel like to have to get everything. Just do what you can.”

We asked this church to bring enough supplies for an entire community nearly 1,500 miles away. Were they really going to do it? Poney up the cash, get in the car and drive for an entire day? Nothing about it was convenient. It would’ve been way easier to back out at this point. Everyone would’ve understood.

And then, Justin googled Vidor and discovered what this area is known for. Racism. Being a haven for the KKK. Being intentionally segregated—for decades after the civil right movement. Lynchings in the 1990s.

Justin’s church had just waded into a conversation about racial reconciliation. He’d done a sermon series about it, which prompted a series of heartfelt discussions about how to respond to prejudice.

Were these really the people they wanted to sacrifice so much to help? It was yet another reason to pass. Valid excuses to back out were starting to pile up.

But they didn’t. They chose to love anyway. According to Justin—he told me as he unloaded the third pallet  of water—his church saw it “as an opportunity to love across enemy lines.” To put their money where their mouth was. 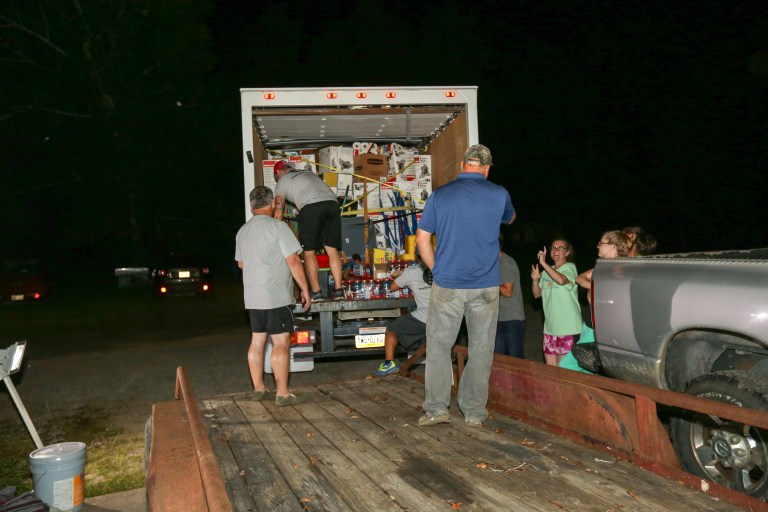 And wow, did they show up to love the town of Vidor.

There are only 200 or so members of Justin’s church, but together with their community, they purchased nearly $10,000 worth of supplies. The church loaded up their truck, and off they went.

Justin and one his church members drove through the day and then through the night—taking turns driving and sleeping—knowing that families were in desperate need of the supplies they were bringing.

Get inspiring stories of people waging peace, delivered to your inbox.

And that’s why, at 10:30 on a Monday night, we were waiting in the dark to meet them, Charisse bouncing around the tractor-trailer in her running shorts. Most people would pace back and forth at a time like this, but Charisse doesn’t pace. She bounces.

While we wait, her daughter, a fifth-grade teacher, tells me that their school is so badly damaged that the elementary students will have to share the high school campus for at least half the year.

Oh, and the school’s entire library was lost. Every single book.

When the truck came around the corner, Charisse oohed and ahhed over the size of it and then ran around squeaking directions to her husband—who is the kindest, gentlest veteran you’ve ever met. (They’re the perfect pair.)

After a lot of flagging and adjusting and even more barking from the dogs, the truck finally parked. Introductions were made, and Justin slid the back of the truck open to reveal the contents.

There was clapping and dancing and hugging (no one was exempt) and excited jazz-hands as she took in the massive amount of supplies. Her eyes nearly popped out of her face. 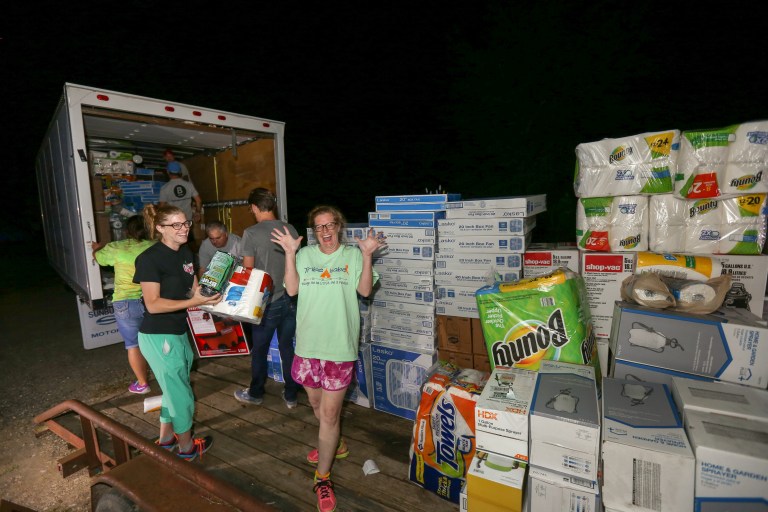 It took over an hour to unload. Fans, dehumidifiers, saws, shop vacs, bleach, sprayers, shovels, hammers, tool belts, paper towels, masks, gloves, nearly 4,000 trash bags and multiple pallets of water… it just kept coming. We ran out of room on one trailer and had to reposition the truck to finish unloading it on a second one.

Then, you know what Justin did?

He got back in that truck and started driving home. Another 24 hours. He had to get back to his family and his church. Didn’t sound like a great week for him to drive across the country, but then… when is a convenient time to do that?

No, peacemaking isn’t convenient. But it is life-changing.

It was life-changing for Charisse and her community. When she picked up the phone to ask for help, she knew it was a difficult ask.

As we unloaded, she told us about the history of Vidor and how her family was impacted. It was bizarre to hear one of the sweetest, most generous people I’ve ever met talk regretfully about her community’s connection to the KKK.

But Charisse is changing the face of Vidor. 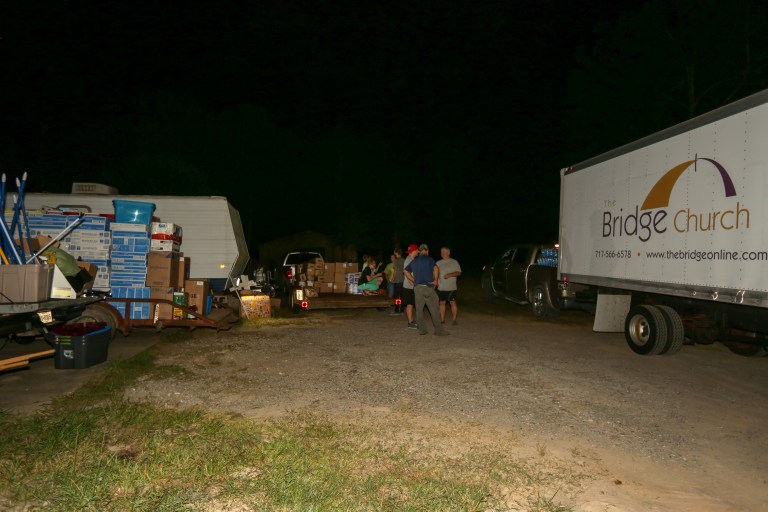 It was life-changing for Justin and his church, too. They got to think deeply about what it means to love others, even when there are compelling reasons not to.

They got to experience the inconvenient worthwhileness of peacemaking. Which means next time, it’ll be a little bit easier. Or at least they’ll know the value of it going in.

This is peacemaking. It takes time, energy, resources, and deep thinking. It requires you to be selfless and make hard choices.

And these are the times that, as JK Rowling once wrote, “we must choose between what is right and what is easy.”

I hope we’ll all make the good, hard choices.

Peacemaker Friday is published weekly to share stories of people unmaking violence around the world. Be inspired. Take action.