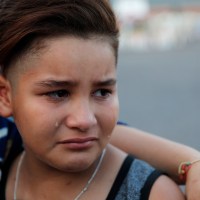 Wars begin in our heads and our hearts, long before they reach our hands.

We’ve seen it too many times, on too many frontlines, with our own eyes.

For years, the Yazidi minority in Iraq were branded “devil worshippers” and worse by those who did not understand, or did not want to understand, them. They were persecuted, marginalized, demonized.

Then ISIS targeted the Yazidis for extermination, killing thousands—five years to the day before a 21-year-old man went on a killing spree in El Paso, Texas.

The language in his reputed manifesto is not unfamiliar—or unique.

He branded immigrants and Hispanics as “invaders.” He wrote about those he believed were “hell-bent on destroying this country.” He railed against “race-mixing,” which is easy to feel indignant about until you remember it wasn’t long enough ago in America’s history that his views on this were mainstream.

He said America is “rotting from the inside out,” and justified his actions as “defending my country from cultural and ethnic replacement.”

It originated with us.

With all of us who’ve allowed ourselves to believe the worst about those who are different from us.

With all of us who’ve used language to dehumanize our enemies or political opponents.

With all of us who’ve chosen to see the other as an “invader,” rather than consider the possibility that we might actually rise together.

The El Paso killer did not get his ideas from President Trump. He did not get them from Charlottesville. “My ideology has not changed for several years,” he wrote before committing his act of terror. These ideas—they lurked in his heart and mind long before he acted on them.

Wars begin in our heads and our hearts, long before they reach our hands.

If we want to end war—and make no mistake, the killing of 20 people in El Paso, Texas, or 9 people in Dayton, Ohio, is as much an act of war as what ISIS did in Iraq—then we have to change the ideas that lead to war.

There is no other way to heal all that’s tearing us apart.

To those grieving in El Paso and Dayton: we grieve with you. We are for you. We long for the more beautiful world with you—and we’re committed to building it, together.

There is one step we can take right now to start healing all that’s tearing us apart.

We can gather with neighbors of every background, identity, and point of view. We can gather, not in spite of our differences, but because of them. Because isolation fuels polarization. And gathering together to love anyway is the antidote.

We’re launching a new kind of community where each month we meet with people who are one or two steps outside our usual circles, learn from each other, and pursue peace through action.

If you’d like to host a gathering in your neighborhood, take the survey to get started.