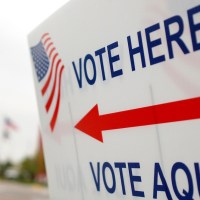 Our children are watching us.

They have heard family members, neighbors, and classmates demonize each other. They might have heard about the black church in Mississippi that was vandalized and torched by a hate-filled extremist who painted “Vote Trump” on the side. Or the GOP office that was firebombed in North Carolina.

The wounds and distrust inflicted on our communities by these acts, by the violent rhetoric, and by the resurgence of hate groups like the KKK—it will all still be here on November 9. This is our collective reality, and it is our country’s legacy.

But we don’t have to end this election season still wearing the mud that was slung around. It doesn’t have to be the end of the story.

Let’s show our children how to end this election on the right note—by making our neighbors feel celebrated instead of distrusted. Let’s defy hate and our own election-itis by showing our children how to be peacemakers in an otherwise toxic political season.

Let’s teach our children how to step across the “enemy” lines of party affiliation and love anyway.

Here are three ways our children can be everyday peacemakers this week.

Attach a note that says, “Happy election eve! We made it! We’re so glad you are in our neighborhood, and you are part of what makes America great. Love, your neighbors.”

This election cycle has poured fear into our communities and homes. Nothing pushes back fear more than connection. We can build community by reaching out with simple acts of hospitality and saying, “I see you and I care.”

Nothing says this better than a spontaneous gift of cookies.

2. Host an election party—for people of all political stripes.

Voting gives us a lot to be proud of. (Yes, even this year.) Our children need to see us fiercely celebrating our right to vote instead of just celebrating (or mourning) the results of the election.

There are countries that are in rubble because their governments were unable or unwilling to hold elections peacefully. There are no winners and losers when a peaceful election day happens. Diversity of thought makes our communities strong. Our children need to see us celebrating that. Let’s show them how to congratulate each other on another peaceful transition of power, another election without civil war.

Designate a specific time during your party for each person to congratulate one another on being part of peaceful election.

3. Congratulate 10 people who voted, regardless of who they voted for.

Challenge your children to congratulate anyone who has voted. It can be as simple as a handshake or a high five.

Our country is great when we value each others’ voices in our communities, schools, and in the shaping of our nation. Our children have heard our disappointment—or straight-up bad-mouthing of people on the other side of the voting divide. They’ve seen us throw bricks at one another. This is our chance to use our bricks and build a cathedral of mutual respect, instead of breaking more windows with our words.

Let’s thank each other for showing up. Let’s celebrate. Voting is democracy’s family meal. It’s not the championship football game between rivals. We aren’t losing anything when family members show up to the table with a different vote than ours. We don’t win when opposing voters are excluded. Voting makes us part of each other. Be proud.

Let’s fan that flame instead. Let’s crush the “us versus them” schoolyard narrative and give our children something to look up to. Let’s invite them into a better story where our voting differences don’t fuel distrust and disdain.

We don’t have to build walls out of our political differences.

I believe we can build a cathedral together instead.