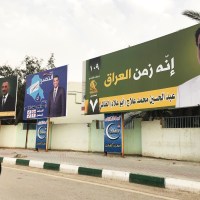 On Saturday, for the first time since the government regained possession of its territory from ISIS, Iraq will head to the polls in a nationwide election.

So many variables come into play with this election. A new voting system, more than 2 million residents still displaced from their homes, ongoing fears of government corruption and electoral fraud, and the oversized influence of a few voices—it’s impossible to predict the outcome.

But Iraq’s election could have major implications—especially for those who live here, but also for our work and for Iraq’s relationship to the rest of the world, including the US. Here is what you need to know…

What do voters want?

Those who are still displaced want to return to their homes. They need the government to restore essential services, rebuild schools, and help them to rebuild their homes.

Iraqis won’t be satisfied with a stale absence of violence, though—and rightly so. They crave a healthy country, with a vibrant economy and good jobs. They see what life looks like outside Iraq, whether through travel or television or social media. They are impatient with living in a country rich in resources, but without continuous electricity or water supplies.

Iraqis want change. But many voters who look at their choices seriously doubt they will experience change with so many established, known politicians running for reelection.

There are more than 24 million eligible voters inside Iraq, as well as Iraqi citizens living abroad who can participate in this election. Polls opened on Thursday for the military and police who provide security for the main election, which is held on Saturday.

There is a large cohort of new voters this year—3.3 million young adults will have the chance to vote for change and opportunity for the very first time.

Because of the diverse nature of Iraq’s population, no single candidate or party can win a majority—instead, coalitions are formed in order to win enough seats to rule. It’s appropriate really, as almost every other part of Iraqi culture follows this same shoulder-to-shoulder pattern.

In the past, voter turnout has generally been high, though that might not be the case this year. The majority of Iraqis must vote in their hometown. This makes voting complicated, if not impossible, for many displaced people. Families living inside refugee camps can vote if they have the correct identification, but displaced families living outside camps must return home in order to vote.

Who (or What) Could Sway This Election?

There are two ways to look at this: direct influence and perceived influence.

Tribal, family, and religious leaders can have some of the most direct impact on voter choices. Within the home, family patriarchs and tribe leaders can affect the vote of everyone in their sphere of influence. Whether through traditional associations, family ties, or simply out of respect for the wisdom of elders, what leaders decide carries a lot of weight.

Religious leaders also have huge powers to sway voters. Last week, Iraq’s top cleric for the Shia Muslims (the majority group in Iraq) declared his followers “free to vote.” Rather than throwing his support behind any particular candidate, Sistani reminded voters of the values they should consider when voting, including taking a stand against corruption and minimizing the influence of outside countries.

The Grand Ayatollah’s call to be wary of outside interference is a reference to the widely perceived influence of countries like Iran and the United States. Many Iraqis believe that outside forces ultimately control elections, and that whoever the US or Iran wants to win (depending on the individual’s point of view) will win.

There can be a strong feeling of being pawns in someone else’s game.

Sectarian impulses… on the decline?

Iraq is far more diverse than many in the West would guess. These diverse groups often have very different needs and priorities.

Minority groups like Yazidis, Christians, and Shabaks are fighting for their survival in the legislature, as well as in their communities. Major groups like Arab Shia and Sunni are trying to achieve different goals, which vary depending on the community and the region of the country.

It’s been common for ethnic and religious groups to vote in blocks—sticking together was seen as the best way to leverage their limited power. That is beginning to change though. There is a shift happening, away from identity politics to issue-based politics. Minority groups like Christians and Kurds are not solidified into voting blocks this year. Candidates are aligned with majority parties who they feel can best represent their interests in Baghdad.

Corruption and the battle to tame it

Every level of government in Iraq has issues with corruption. It widely believed that corruption is the single biggest reason why basic services in Iraq are so poor. That belief is equally true of the electoral system.

In the past there have been allegations of ballot stuffing—which rang true when the total number of counted ballots was far more than the number of voters.

There are systems in place to try to achieve fair elections, including strict rules about identification and specially issued voter cards, and ink-dipped index fingers to prevent repeat voting. These measures have had limited success.

This year, for the first time, biometric voting machines have been introduced, which will undoubtedly bring their own controversy. Only 60 to 70% of voters have been issued the new voter cards needed for this new system. There notion that the machines can’t be tampered with is viewed with skepticism. And in a country where there is no consistent electricity, even backup systems for backup systems can fail, rendering biometric voting machines inoperable.

Then there is the ancient problem of poverty. Voter fraud carries up to a 15-year prison sentence in Iraq, but some of the poorest voters take that risk and sell their votes to provide for their families’ most basic needs.

Many of these voters are disappointed in a government who can’t provide for them, and don’t believe the election will change that. The going price for someone’s vote is fairly wide, ranging from $100 at the top end to as low as a $5 phone credit at the low end.

So What Can We Expect From Iraq’s Election?

Frankly, it’s hard to know! There are so many different variables this time.

Because of long-standing economic woes, in no small part a result of economic sanctions since the downfall of Saddam Hussein and the rise of ISIS, some who didn’t suffer under Hussein are nostalgic for the days of his reign. They look back on a “simpler,” more prosperous time and wish that for themselves.

Many young people want the chance to experience the kind of life they see in Europe and America—but right here in Iraq. They want to stay in Iraq, help to build a more beautiful nation. They want to be able to succeed financially. Up until now, only upper income families could aspire to that.

As people who love Iraq and the Iraqi people, we expect to continue loving—partnering with local organizations who are building great things in their communities, empowering the disadvantaged to start their own businesses, and supporting displaced families so they can finally go home—no matter what outcome Saturday’s election brings.