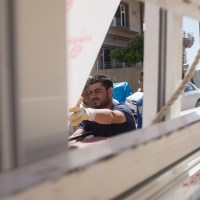 Imagine for a moment that you’re a 25-year-old guy. You had a great childhood, and even though your family lived simply, you had everything you needed.

You didn’t do very well at school, so you didn’t go on to college. You can’t find work in your rural hometown—you tried working as a shepherd, but the long months of loneliness wandering the mountains and hills near the Syrian border were just too much for you. So you move to a city where you are told work is plentiful.

And it is, for a while. You are able to get enough work as a day labourer to get by. Your body is young—you can carry heavy concrete blocks all day long without much trouble.

But your country, Iraq, starts to slip into a financial crisis. Soon enough, construction projects stop, and no one needs your strong back anymore. You spend most days standing at the side of the road, waiting for a project manager to drive by and spot your youth and strength and choose you for work over the dozens of other men standing along the same road.

But at the end of most days, you and the other men are still there waiting.

It is 2014, the year ISIS invades your hometown. You and your family are Yazidi. You have a different faith and different culture than the Muslims in your region. ISIS has a particular kind of hate for your people. When ISIS captures Christians, they are given the chance to convert or flee. There are no such deals offered to Yazidis. If your family is captured, your parents will be murdered and your sisters sold as slaves.

Your whole family runs for their lives—they leave everything behind and flee as fast as they can to your home, where it’s safe.

You are 25 years old. You barely have enough work to feed yourself. You have few skills. And now you are responsible for 13 people.

Today, three years later, you’re a little older and married. ISIS has just been driven from your hometown, but now rival militia groups battle for control of it. The economy still hasn’t picked up, and you are still responsible to care for your large extended family. You are not yet a father, but you carry the responsibility of one.

Your name is Ali.

And you need someone to give you a shot at a better life.

We drove through a heavy metal gate, down a dirt road that wound between rows of trees, then made a tight left-hand turn into the orchard. Ali and his family were sitting at the base of a large pile of earth, filling pots ready for seeds. The owner of this orchard lets Ali’s family stay in the caretaker’s room for free, so out of gratitude they help in his orchard.

It’s a beautiful spot. But Ali and his family can only think of home in Sinjar, in northwestern Iraq. As they work, they find themselves talking about the “old days.” They owned their own home there, grew their own food, and their needs were simple. They lived on $100 a month and were satisfied. Now that they are displaced, $600 a month isn’t enough—and Ali could never earn that much hauling blocks anyway.

When Ali was invited to learn how to work with aluminum and PVC, he leaped at the chance. Not only will this skill give him more opportunity now, but it will put him in a great position to return home to Sinjar. He’ll have the ability to earn a good living as soon as he and his family can resettle.

The last time Ali visited Sinjar five months ago, their house was still standing. Many of his neighbours aren’t so lucky. They will need the skills of someone they can trust, someone like Ali—who can do the necessary work of rebuilding doors and windows, making their homes secure again after they’ve felt anything but secure.

Empowering displaced men and women through small business is better than aid. It’s a relationship defined by partnership.

Everyone in this relationship brings something of value to the table. When you invest in small businesses like Ali’s, you give needed cash, encouragement, and the knowledge that someone beyond his immediate circle believes in him. Ali brings hard work, a willingness to sacrifice, incredible loyalty, and a determination to rebuild his community.

It’s this kind of partnership that makes it possible for Ali to imagine a better future for himself and his family.

When you support our empowerment programs, by sponsoring, donating, or making a purchase from our store, you partner with local people to help them rebuild themselves, their community, and their country in the wake of violence. Thank you for believing in them in such tangible ways.

Partner with displaced people and help them remake their world.