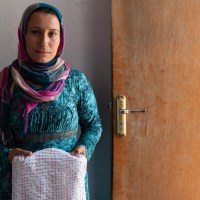 Throughout this month we’ll be highlighting stories of our refugee maker friends. Subscribe to the 2019 Preemptive Love Journal, which will arrive to your postal address in November, to buy their products, read more stories, and learn more about our work in Iraq, Syria, and the US-Mexico border.

Salamat and her husband had a modest life together. They spent their early married years as caretakers of a neighbor’s small orchard, and later moved to her husband’s hometown, closer to his family. Their lives unfolded within a fairly small patch of Syria. They didn’t venture far from home, they were surrounded by what was familiar, and within their own hands they had the power to create a living and life for their family.

Until the day they boarded a bus with their young children—destination unknown. They were leaving the war–leaving Syria–that much they knew. But every time they asked the driver of the bus bound for Iraq where exactly it was they were going, they got no answer. When the bus finally stopped, there was no camp waiting for them, no tent. They stepped off the bus in a new country, surrounded by strangers, and were utterly on their own to figure things out.

It can be hard to understand how utterly disorienting it is to be displaced. For nearly 30 years Salamat lived inside a particular framework. She understood how life worked, and how she fit into the community around her. Her husband had contacts cultivated over his whole lifetime for finding work, and Salamat knew who to go to if she was ever in need. In fleeing home, not only did she lose what was familiar, but the power to make even small decisions was taken from her hands.

When the refugee camp that Salamat now calls home first opened, there were many different international organizations working in the camp offering training programs. Salamat took every chance that was offered to her, and expanded her skills in crochet and sewing. “It helped a lot,” she says. Those trainings were great for Salamat’s sense of accomplishment, but in the end, they didn’t lead to work.

When we approached Salamat about creating hand towels that you can purchase in our gift shop and use in your home, we offered an opportunity that would tick all of her boxes. When Salamat sits to make hand towels she carefully plans even rows of stitches, threads her needle, then rocks the sharp tip in and out of a length of fabric adding dashes of color, before hemming the edges. Each hand towel helps keep her hands and her mind busy, but it also helps her buy groceries and pay school expenses.

When you buy products handmade by Syrians and Iraqis displaced from home, things like Salamat’s hand towels, or items like soap, knit baby sweaters, or crocheted washcloths, you put a little bit of power to make decisions back into the hands of makers like Salamat.

Empower women with choices, with a future. Shop now.