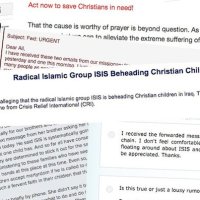 I would make fun, but how else would we keep up with estranged uncles or sweet little old ladies? Most of the forwards I get are silly updates about cats hanging from ceiling fans or goldfish funeral stories, even the occasional political jab, but I’ve noticed an Iraq-related forward making the rounds that is deadly serious, and I’d like to address it here.

Before that, a word of thanks for what you’ve helped us accomplish on behalf of persecuted minorities. We are now supporting hundreds of families across the country, often in the most hard-to-reach cities like Baghdad and Kirkuk. With most of the aid going to the same region of Iraq, millions of displaced people have fled to cities where few aid groups are willing or able to go, but we are committed to serving the most neglected, the most vulnerable. If you’d like to be a part of that, please make a donation here.

Now, if you haven’t received one of these email forwards, they contain shocking statements about the militant group ISIS’s (Also called the Islamic State and ISIL) treatment of persecuted minorities, particularly Christians, and I’d like to address three of the main concerns:

1. Is ISIS ‘systematically beheading children’? As a new father and a human, this sickens me to the core. Even seeing these words in the same sentence makes my stomach turn. The rumor seems to have started with an interview on CNN that you can watch here. The interviewee also claims there is “a park in Mosul in which heads of beheaded children are put on a stick.”

These claims haven’t been substantiated, but that hasn’t kept them from spreading like wildfire. I’m not saying there haven’t been child beheadings (though if you find evidence that isn’t word-of-mouth, let me know), but it’s that ‘systematically’ word that makes the rumor seem overblown. I would encourage you to read broadly and to gently challenge unsubstantiated claims, and at least use words like ‘alleged’ or ‘rumored’ at the beginning of statements.

Some may shrug and say, “We know they’re monsters, is it really such a stretch?” And yet this is exactly what ISIS militants say in their propaganda about you. Shouldn’t we be more nuanced, fair-minded, and well-researched than the militants we criticize?

It is difficult, but we must resist rumor-peddling for the sake of our own agenda, at the expense of real evidence. Otherwise we run the risk of becoming ‘militant’ even as we criticize militant thinking.

2. Do all Iraqi Christians want to leave? Over the last two months, I’ve befriended and interviewed dozens of persecuted Christians in Baghdad, Sulaymaniyah, and Erbil in addition to our network of Christian leaders across the country, and the response is very mixed. Some want to wait it out and return to their ancestral homelands, others want to create their own autonomously governed ‘Ashuristan’ region inside Iraq, some are willing to emigrate (often reluctantly) and many seem unable to think that far in the future, being more concerned with the onset of winter or missing relatives.

This is a sensitive issue as many in the international community have their own agenda for Iraq’s Christians, but I personally believe it should be the Iraqis’ choice. They were forced to flee their homes under compulsion, why should they be forced to stay or emigrate under compulsion, too? Our treatment of persecuted people should at least be better than their persecutors’, and that means listening and working to provide them with options.

The suffering of Christians is real and something we care deeply about, but ‘genocide’ seems overreaching, and many who use the term have a specific agenda that they want you to act on. I think ISIS’s actions toward Christians can be described as ‘genocidal’ and I am sure Christians have been brutalized in a disgusting way—I’ve heard the stories from the mouths of survivors.

But if any groups could claim the term ‘genocide,’ it would be the Yazidis, Shias, or Shabaks, who experienced even more brutality, with their women being reportedly taken, their people killed en masse.

The sad irony of emails like these is they can create the very attitude we hate—the thing we’re decrying in the email!

I’m all for prayer and concern for the persecuted, but we must resist the very human tendency toward tribalism because it will only worsen situations like these. If you really want to resist extremists and help persecuted families in Iraq, here are three actions you can take right now:

1. Trade trenches for bridges. ISIS’s ranks swell when we refuse to listen to young men, when we dismiss them as backward, scary, or members of ‘the other team’, we make terrorist groups that much more appealing. This obviously doesn’t excuse their choices, and it doesn’t mean we’re to blame for their actions, but it does mean we are participating in global sectarianism rather than working to bridge gaps and be emissaries of peace.

If you want to hurt groups like ISIS and Al Qaeda, Google the nearest mosque in your town and go make new friends. Ask non-threatening questions with your fists down, invite them to dinner, try to understand.

2. Consume wisely, broadly. Read news from other countries, especially those that make you bristle. You don’t have to agree with them all (who would?), but this will give you a much broader, more accurate take.

In addition to all the big news outlets, I’d recommend you subscribe to Al Monitor and Niqash‘s weekly newsletters for a more independent take. Check Rudaw for news from Iraqi Kurdistan, The Independent, Hurriyet and Today’s Zaman (Turkish), Fars News and the Islamic Republic News Agency (Iranian) and for the hardcore among you, follow Kirk Sowell and Juan Cole for more in-depth commentary on events in the Middle East.

3. Provide relief for a persecuted family. We are now providing essential services to hundreds of displaced Christian, Yezidi, Shia, and Sunni families across the country, but many more need your help! Serve the families who need it most by donating here.

In a recent interview discussing responses to militant groups like ISIS (listen to it here), our director summed it up well: “we should not be more sectarian than the terrorists,” and that means resisting the call of tribalism by working to understand those different from us and to care for the persecuted and our enemies—even ISIS.