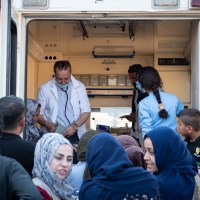 Failure is not an easy thing to talk about. But from our earliest days, we decided our failures would be something we share with you. Not just the wins (though we love sharing those).

The worst failures are the ones from which we fail to learn. And we want to learn and grow with you.

So we want to tell you about two ways we failed recently in northeastern Syria, what we’ve done to correct these failures, and what we’re doing to learn from them.

When a Food Distribution Goes Bad

For weeks, you’ve had us on the ground, serving thousands of people who fled the Turkish assault on the Kurds in the border region between Syria and Turkey. These families are sheltering in abandoned schools, without access to food or warmth or medical care.

You helped deploy two mobile clinics that are treating as many as 500 patients on some days. You’ve also helped distribute thousands of ready-to-eat food packages, each of which can feed an entire family for a week.

But there was a problem with one of our food deliveries.

When we arrived at the distribution point and began handing out food, we quickly realized the cans of meat in many of our food packages were damaged in transport and had spoiled. They were inedible.

To fail those already facing some of the most dire circumstances imaginable is the very last thing we want to do.

One individual came back to our food distribution, understandably upset, and said, “You come here, you give us rotten food, you take our pictures, and you leave.”

Those who’ve lived through war are accustomed to people exploiting their suffering for a photo op, while doing little or nothing to help. We hear it everywhere we go. And people tell us we are different. So before he left, we deleted every photo we had taken of families that day, so we could tell him that he didn’t have to worry about us using them—about us using him—in spite of our failure.

But there was more we needed to do to make things right.

Every package of food is checked before being loaded onto a truck, to make sure none of it has expired and all of it is properly sealed.

However, the food often has to be moved between multiple trucks before arriving at the distribution point. The trucks often have to travel for hours or days on dangerous, damaged roads to reach those who need it.

Just one crack or dent can cause an entire can of food to spoil. And in this case, a lot of food spoiled by the time it reached its destination.

Our biggest failure was only doing quality control at the point of origin, and not at the destination.

For all that went wrong, several crucial things went right that day.

The posture of our team—a willingness to listen and respond, rather than turn away—allowed us to act quickly to make things right, to make sure people had the food they need. The courage of those we serve—the families who were willing to tell us about the problem, trusting that we still show up again.

A big part of what went right that day was a willingness to name what went wrong.

How We’re Fixing It

The first thing we want you to know is that every family affected by our failure received new food the very next day to replace what had spoiled. The manufacturer replaced the rotten food at no cost, ensuring that we did not have to use donor money to cover the replacement.

Second, we made sure our team on the ground—from the people who drive the trucks, to the people who hand out the food, and everyone in between—know the value of owning our failures. Working together to solve the problem, rather than casting blame, helps to create a culture of transparency.

When we operate from a posture of fear, our first impulse is to hide our mistakes. This is every bit as true in the aid world as it is anywhere else. But we cannot grow—we cannot serve well—if we do so. That’s yet another reason why it matters that we share them with you. Our public transparency helps set the standard for our internal transparency. It helps us model for each other, our staff, partners, stakeholders, and friends what kind of world we want to live in.

Third, we are changing our quality control processes. We’re working to establish checks at multiple points in the aid distribution process, not just at the beginning—to ensure that quality is maintained throughout. The dignity of those we serve demands this.

We’re also working to implement ways to make it easier for families who receive aid to reach us if anything goes wrong, including adding contact information to every package of aid. They should be able to hold us accountable—directly and personally—when something goes wrong.

People in need are too often viewed as powerless “recipients.” Beneficiaries. A number on a food voucher.

They are so much more than that. We consistently strive to recognize and honor their power, their dignity.

In the rush to communicate what is happening on the ground in northeastern Syria, we got a few details wrong on a recent podcast episode.

First, we did not provide enough context about the fact that some of the displaced families we’ve served had told us, “You’re the only ones who’ve come.”

Second, we inadvertently left out an important detail about an incident at a displacement camp where we are serving.

Third, incorrectly reported the number of individuals sheltering in part of northeastern Syria.

When the Turkish offensive began in early October, the security situation in northern Syria deteriorated fast. Some larger aid groups announced they had no choice but to pull out.

At the same time, we started serving displaced families, initially at 37 different locations (now 67) in areas around Tal-Tamr, Hasakah, Al-Hawl, and throughout the countryside—providing ready-to-eat food and mobile medical care. Again and again, these families told us and our local partners the same thing: “You’re the only ones who’ve come.”

They had fled their homes near the border with Turkey, taking shelter in abandoned, unheated buildings. They had nothing. They had never felt more alone. Until you showed up.

As we shared their story, we repeated what some of them had said to us: “You’re the only ones who’ve come.” But in some instances, including a recent podcast episode, we did not include the necessary context—namely, that this was the situation for these families in some of these 37 locations, not the whole of northern Syria.

In the weeks since the Turkish offensive began, some aid groups have sought to return. Some never left.

The work these friends are doing is essential, as is the work you’re doing among families at the 37 shelters where we’ve been serving. The need on the ground far eclipses what all of us put together can provide. But in our haste to communicate what displaced families have been telling us, we gave the impression that we were unaware of the lifesaving contribution that others are making here.

On the same podcast, we shared a story to illustrate the danger of working in the displacement camp at Al-Hawl. A number of “ISIS families” are kept at Al-Hawl, along with thousands of refugees fleeing violence.

On the podcast, we shared how one of our mobile clinics tried three times to enter part of the camp where children and wives of ISIS fighters are held. The first time, our team was able to enter and treat people. The other two times, they were forced to turn back due to violence.

On one of these occasions, a car was set on fire. Our podcast team did not realize when sharing this story that the car involved did not belong to our team, and this detail was not made clear in the episode.

Finally, in a handful of social media posts on October 30, we reported that 44,400 people were sheltering at the 37 schools where we are serving. This number turned out to be incorrect, because it was calculated based on what we originally thought was the average number of families at each location—which in fact turned out to be the average number of individuals at each one. The number has been corrected or removed from all affected posts. Crucially, the number of people we reported serving with medical care as of October 30 (roughly 6,000 people) remains accurate.

How We’re Fixing It

As we learned of the mistakes in our recent podcast episode, we immediately took it down and released an updated, corrected version. Mistakes like these are often, in part, the result of rushing to share information quickly—and while we want to keep you informed as quickly as possible, it’s even more important that what we share is as accurate as possible. In the wake of these mistakes, we have implemented new protocols to ensure that our programming team—those closest to the story—have the opportunity to review content before it goes out the door, something we failed to do with this podcast episode.

It is not easy to share our mistakes. We don’t like to fail. It is humbling. But it is essential that we share our failures with you, not just the wins—so we can learn and grow together, as we continue to serve families on the frontlines of some of the world’s biggest conflicts.