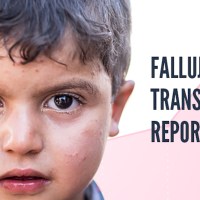 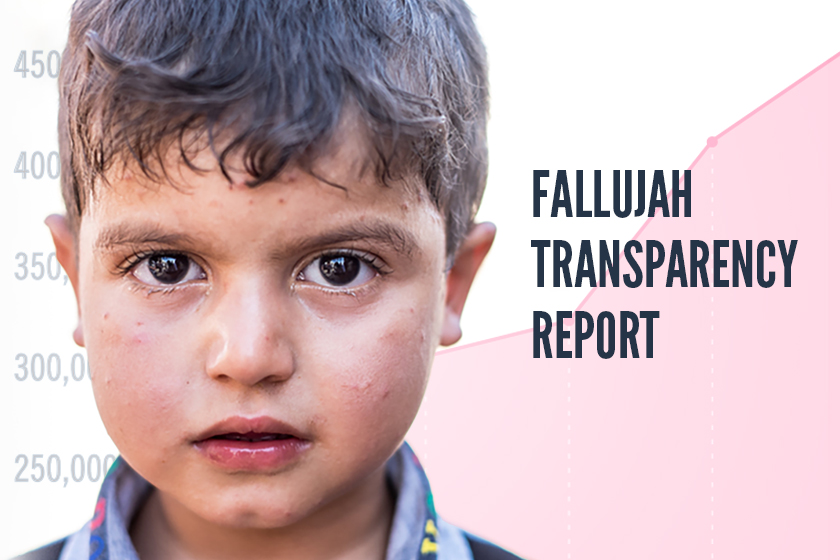 Note: This is the latest update to a report we last shared on July 24. To go directly to the updates since the last report, click here.

On May 26, we sounded the alarm on Fallujah, as Iraqi forces fought to liberate the city from ISIS. The battle displaced 86,000 civilians, many of whom risked their lives to get out before ISIS was driven back. Families fled to the desert, taking refuge in camps that were dangerously ill-equipped. Even many veterans of the Syrian and Iraqi refugee crises describe conditions outside Fallujah as the worst they’ve seen.

But you are changing that with your world-remaking love.

• Displaced families have received more than 611,000 pounds of food.

• Fallujah families have been displaced for almost 3 months. We’re in Fallujah now, meeting with government officials to plan for their return in the coming weeks.

These families survived bullets and bombs. Thanks to you, they have a good chance of surviving the desert, too.

Delivering aid outside Fallujah hasn’t been easy—or safe. On June 28, our team was caught in a major battle between ISIS and Iraqi and US forces. Overnight, 80 armed ISIS vehicles stopped at our stranded aid trucks, which were carrying 100,000+ pounds of food. Our team covered themselves in dirt and hid until the militants moved on. Staff in another location were nearly killed in a U.S. airstrike targeting militants. The narrow escape has led us to increase communication with Iraqi and U.S. security officials to ensure better coordination and keep our staff safe, as we continue to undertake difficult, dangerous work on behalf of those who are most vulnerable.

Our first aid distribution on June 2—inside the Fallujah militarized zone—was interrupted when conflict broke out between tribal and religious leaders. Before we could finish our delivery, our military escorts told us to evacuate or be left behind. As a result, we were forced to leave some of our aid in the hands of local leaders, rather than distributing it ourselves. While we have every assurance the remaining food reached those who needed it most—and while we acted on requests from the displaced families themselves—it was a volatile situation.

On every mission since, we have successfully put our aid into the hands of displaced families ourselves, despite occasional pressure from various armed elements trying to influence how we do our work. The lessons learned from that first distribution have been applied to ensure that every aid packet goes where the need is greatest.

May 26
Iraqi forces surprised many by making significant gains just a few days after the assault began, and the international community began paying attention. Several villages were liberated, including the strategic town of Garma. These victories resulted in significant displacement as families were finally freed from ISIS control and eager to escape the fighting. 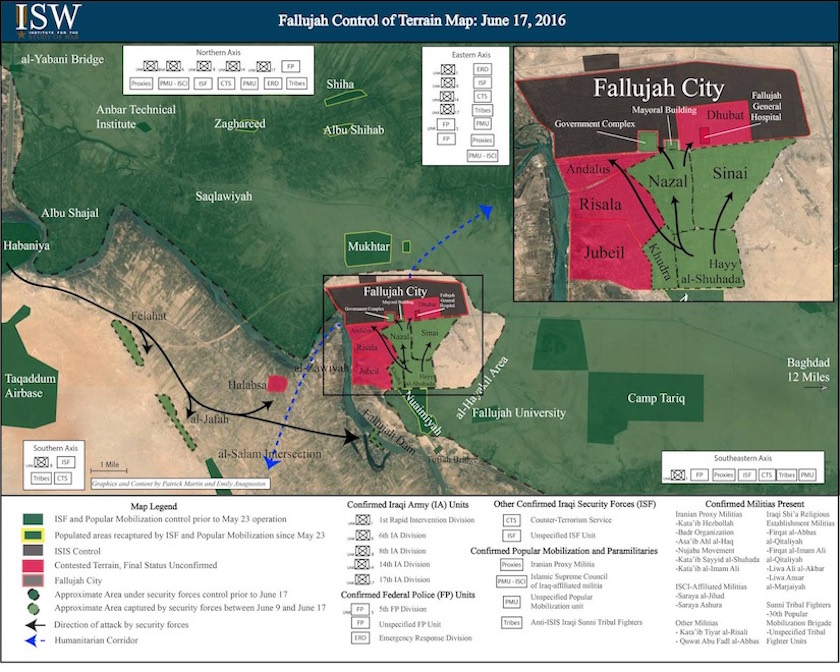 As reports poured in, documenting the need in and around Fallujah, we began making plans to deliver emergency aid. We began a conversation with friends like Lecrae, Jon Foreman, Jen Hatmaker, Propoganda, Lynne Hybels, Jamie Tworkowski, Gabe Lyons, Switchfoot, and others—all of whom raised their voice for the people of Fallujah. With their help, we began sounding the alarm—and you answered.

A short while later, we sent an email to a small number of people, who had given to this kind of work before, asking them to help starved out families fleeing Fallujah. The response was incredible. You made it possible to believe we could do more for Fallujah.

So we sent another email, asking everyone to help.

Your giving, combined with significant  contributions from friends at Mercury One Foundation, Bayou City Fellowship Church, World Relief, World Help, and Partners In Relief And Development, put our Fallujah fund at $372,374.55—just days after the conflict began!

June 2
Your love-turned-money-turned-food-and-water crossed the desert to freshly-liberated Garma. We delivered 52,000 pounds of food and 24,000 liters of water near the front line, for 500 families. To this day, we are the only official international aid group to deliver food aid inside the militarized zone, so close to the fighting. 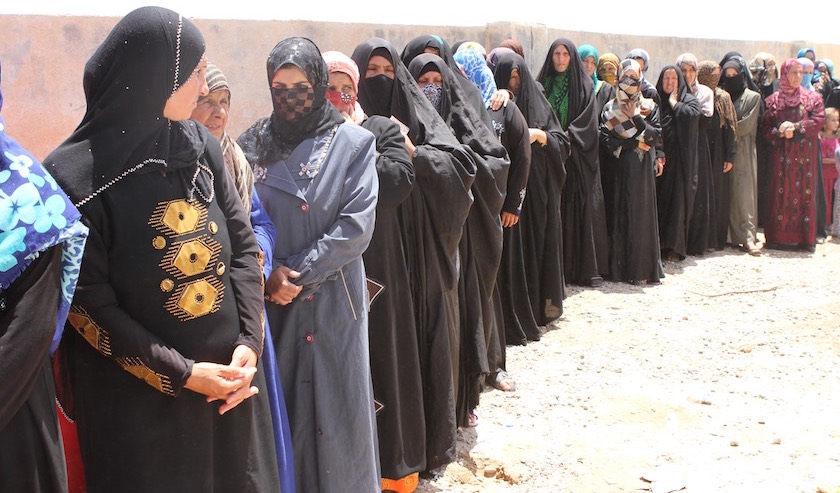 June 3
We conducted a scouting trip to Amiriyat al Fallujah, a relatively safer area outside militarized zone, and found hundreds of mothers and children without food or shelter, begging for help. We told them we were loading a huge truck full of food to come back in two days,“What in God’s name do you mean two days?!” they replied. “We can’t wait until then!” Their children needed food urgently, so our team rushed back to Baghdad and worked through the night to prepare a rapid response of emergency food rations. 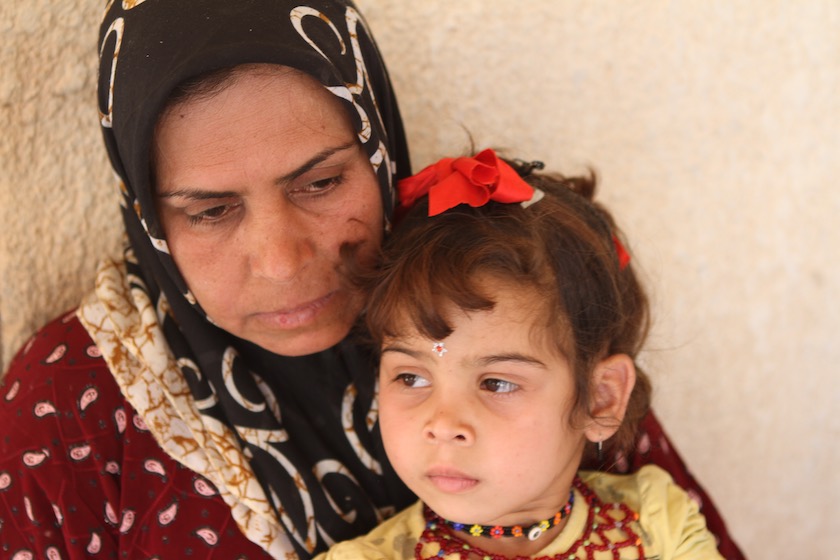 June 4
The next day, our team returned to Amiriyat al Fallujah with a quick delivery of milk, biscuits, cheese, and bread—emergency rations to hold mothers and children over while the larger trucks were loaded with longer-lasting food packs.

We also began working to get ahead of the need, preparing food caches in advance, enough to serve 3,000 people (approximately 500 families) for about a month. We knew an even bigger wave of displacement was coming: as more neighborhoods were liberated, more people would flee and need our help. Rather than respond after the fact, we wanted to be ready by getting ahead.

June 6
As the battle continued, we began receiving reports of people fleeing through minefields, being blown up, shot by ISIS snipers while trying to escape, swimming across the Euphrates and drowning in attempts to escape—18 people according to reports we read, four of them children.

Meanwhile we were looking for ways to help those trying to escape—could we buy and armor boats to help people cross more safely? What about tunnels? Was it possible to smuggle food into the city or people out of it?

June 12
Amiriyat al Fallujah filled up and the overflow was directed to another safe zone southwest of Fallujah, called Habbaniyah. We delivered 110,000 pounds of food to families just hours after they escaped the city. It wasn’t long before Habbaniyah filled too. Additional families were relocated to yet another location called Khaldiya, between Fallujah and Ramadi, and that also began filling up.

Families were running for their lives and ISIS still controlled the city of Fallujah, but not for long…

June 14
After being informed that many families had no means to cook food, we distributed 250 stoves to help empower more women care for their own families independently, without need of outside help. This served about 3,000 families

June 20
We delivered another 100,000+ pounds of food to Khaldiya, between Ramadi and Fallujah. Khaldiya is arguably the least-served camp; even those who have worked in displacement camps for years have expressed shock at the conditions here. Washington Post’s Baghdad bureau chief joined us for the delivery and shared this on Twitter:

In 4 1/2 years covering Syria and Iraq I’ve never seen conditions this bad. No tents. No water. No words. #Fallujah pic.twitter.com/2sbevjr9xn

June 26
ISIS controlled Fallujah for two long years, but on this day they were driven from the last neighborhood they held inside the city. The crisis is far from over—86,000 people remain displaced, and just days later, a massive ISIS convoy launched an assault, endangering one of our aid teams. But Fallujah is theirs no more.

June 28-29
Two of our aid trucks, carrying 100,000+ pounds of food, became stranded in the desert. Part of our aid team decided to stay overnight with the trucks, while the rest made their way for a security checkpoint. That night, ISIS launched a major assault, as approximately 450 militant vehicles tore across the desert. A convoy of 80 ISIS vehicles stopped at our stranded trucks while our team hid in the dirt. The rest of our team was held at gunpoint at the security checkpoint, while airstrikes were launched all around. Shortly after sunrise, our team was mistakenly targeted by successive airstrikes. Everyone survived and eventually, the team and the trucks—still carrying all the aid—returned safely to Baghdad. The entire area was on placed on lockdown after the attack, meaning no aid could get in or out.

July 1-2
We installed two water tanks in a displacement camp west of Fallujah to begin supplying 13,000 liters of clean water every day for thousands of refugees.

July 19
We delivered 110,000 pounds of food to families in a displacement camp west of Fallujah, as well as families outside the official camp—benefiting approximately 3,000 people.

August 11
We provided 1,000 hygiene kits—including 5,000 bars of refugee-made Sisterhood Soap, to displaced families in camps west of Fallujah. In addition, two trainers instructed families on how to prevent the spread of waterborne disease. 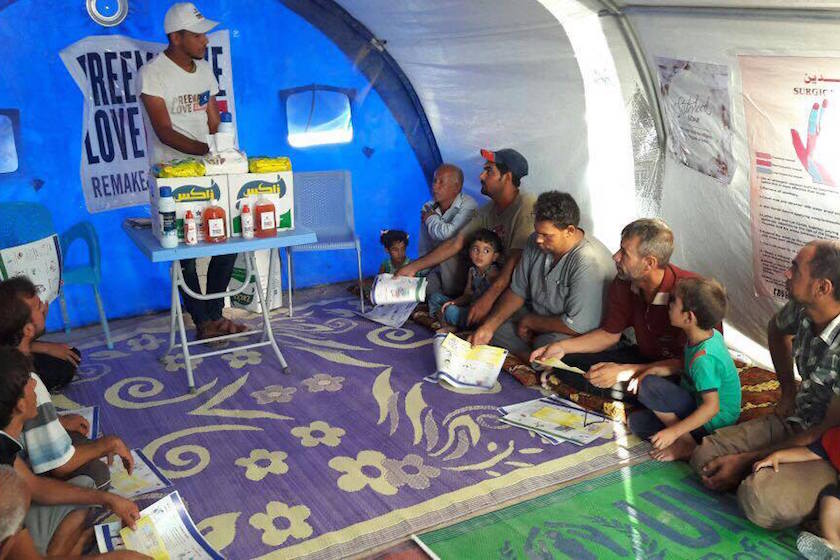 August 13
We extended our water deliveries for a second month and expanded them to reach more displaced families with safe, clean drinking water.

September 3
We’re returning to Fallujah itself to with government officials to coordinate the return of thousands of refugees. Some families could be allowed to come home as early as this month. We intend to show up for them in Fallujah, just as we did for them in the desert.

Removing ISIS was only the beginning for Fallujah. True liberation, real freedom, means a prosperous, safe, strong Fallujah where the people have what they need to live well.

That’s a Fallujah we are committed to visiting in our lifetime, with our children, but it means we can’t just move on to the next big, attention-getting crisis. Yes, we plan to serve in into other areas of need, as we always have. But we cannot leave Fallujah behind while families are still trapped in the desert with nothing.

The media has moved on, but we won’t.

We’ll continue to meet the needs of families in the displacement camps—providing food, clean water, and more. We’ll also be there to help them as they return home to Fallujah, providing small business empowerment grants to help them restart their lives.

When we make a commitment to people, we keep it. And we can only do that because you and thousands like you chose to lean in and love in the hardest places. You gave, people ate.

Thank you all you have given. Please continue to stand with the families of Fallujah.  Your love is both wise and wild, and we’re grateful.

For regular updates and to continue supporting our work among displaced Fallujah families, go here.