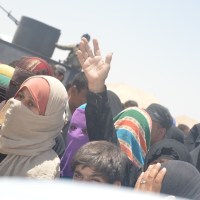 This is what showing up for Fallujah looks like.

Since the crisis began, you’ve provided food for thousands of families who have fled ISIS, many of whom have landed in displacement camps around the city. They had been starving for months, and they needed food. You showed up. You responded—and continue to respond—to their calls for help. You’ve helped deliver hundreds of thousands of pounds of food so far.

But these camps are stretching at the seams. More families flee Fallujah every day; many of them arrive to nothing more than a tent—if that.

Going in, we had the understanding that each tent had a stove. But as we showed up with food, we discovered that many families have yet to receive stoves.

Instead, they were sharing makeshift cinderblock stoves, using pots some women carried from home when they fled.

We couldn’t imagine how 3,000 camp residents could be fed like this. Where in this desert would they ever find enough fuel to burn in order to make fires?

Because we were there on the ground, we knew we couldn’t shrug our shoulders and say, “That’s someone else’s problem.” We knew we had to bridge this cruel bureaucratic gap that caused starving people to possess food—but no means to cook it. After all, rice and lentils aren’t food until you can cook them.

So you showed up again—this time with kerosene stoves.

You were there when our team returned to Baghdad and bought stoves at the bazaar. Purchasing them locally meant they were able to get a good price and respond quickly.

You were there when we loaded up trucks to the brim, ready to return.

You were there as we crossed the tiny bridge at Bzebez, past people waiting their turn to cross, past people fleeing the other direction—carrying what they could.

You drove with our team as they traveled through the desert, and through armed checkpoints.

You were there as our team waited, patient and polite, as security police confirmed all the clearances we needed to get these stoves to people in need.

You were with us as we drove through the main gates of one of the camps, past the point where people gather, down dusty lanes with tents on either side, past women watching with a mix of curiosity and hope.

You were there, navigating rows of tents as we delivered stoves to each tent, while children chased you around the camp. Because of you, 3,000 people now have lifesaving food—and the means to cook it.

We often see the victory sign flashed by the hopeful. It can seem a strange site at first, in a dusty camp where people have lost everything.

But you are creating victory over starvation and insecurity—one stove, one meal, one family at a time.

We’ll continue to show up for the families of Fallujah. Thank you for showing up with us. Please continue to provide food, water, and other lifesaving essentials.