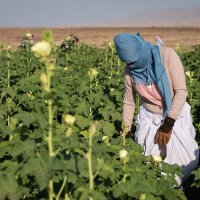 At six in the morning, it’s already hot in the fields. Covered in layers of clothes and thick gloves to protect their skin, the farmers work their way up-and-down rows of okra, picking pale green pods with a distinctive twist and snap.

Some fill aprons. Others fill net bags. And when their harvest grows too heavy to carry, they make their way to a path at the end of the field and fill a large sack.

At the end of the day, they will sell the okra fresh from the field. Of all the vegetables they grow, this is their most profitable crop, and the money they earn this season will need to carry five farming families through until late next spring.

There’s a lot riding on this harvest.

The fields of Sinjar, northern Iraq, have been farmed for thousands of years. Just like in so many traditional rural families the world over, knowledge about growing food is passed down from generation to generation.

Farmers in Sinjar know how to grow food.

But it’s hard to grow anything when you’re the target of genocide. The invasion of ISIS five years ago decimated the Yazidi population, drove survivors from their land, and crushed their communities into rubble.

Much of Sinjar is still rubble today. But the families who call Sinjar home want to return. They want to restart their lives, to till the soil of their homeland again. They know what they need to do. They just need a modest investment to make it happen.

We listened to their desire to go home, heard their plans for rebuilding their lives, and then stepped out in partnership with them.

Five brothers—Qowlo, Hazem, Farhan, Murad, and Muhsen—had a dream to return to farming. But that dream came with a very specific set of needs:

Between the brothers, they have a couple hundred years of farming experience. But the lack of equipment and seeds prevented them from earning a living for their families. We bridged that gap, provided the funds they needed, and watched as they transformed an empty field into a greenhouse filled with an early crop of cucumbers.

And because they didn’t have to go into debt to restore their family farm, the profits from their cucumber sales provided for their immediate needs.

It’s been a good year. The initial investment in the brothers’ farm is having a wider impact than is visible at first glance

There are five families earning their income from this farm. There are 12 families who receive a steady supply of fresh, seasonal food from this farm. And on every harvest day, enough extra food is picked to distribute to five poor families in their community.

Beyond that, the vendor who comes to the field every harvest day, to purchase what has been picked—he goes to market and sells the vegetables, providing an income for his family.

Over the past two years, we’ve helped 660 farmers, and 120 shepherds restart their agricultural businesses.

And the profits made by the farm are returned right back to the community, as the family purchases milk and yogurt from neighboring farmers, and household goods from local shops.

One farm, transforming an entire community. The ripple effect is undeniable.

We’ve had the joy of walking through the growing year with these families, from their first crops of cucumber and tomatoes, to their main cash crop of okra. We have stood in their field and tasted their cucumber and trozi (a domesticated, wild cucumber). On our most recent visit, we were treated to supper made entirely of food they grew, picked fresh that day: sliced and fried okra, thinly sliced and fried eggplant, and tomato omelets.

The growing season is not without challenges, especially in this part of Iraq. Every farmer can appreciate dealing with insects, needed repairs for the generator, and the worry of getting the right amount of water on the fields at the right time.

In addition, farms in Iraq and Syria have been plagued by mysterious fires, threatening to destroy what would otherwise be a bumper yield. Many believe ISIS fighters are responsible for the destruction.

For these farmers, ISIS isn’t a distant threat.

Two years ago, the Iraqi government declared ISIS defeated, and the world, for the most part, moved on. Except, the only thing that happened two years ago was ISIS lost possession of the land. ISIS never left.

Recently,  two local farmers went out bird hunting in Sinjar. They never came back. Their families found them shot dead, sending shockwaves through the community. Hundreds of neighboring men, including Farhan (pictured above) scoured the land along the base of the mountain, and fairly quickly, at a local cement plant, they found a cell of ISIS fighters. Three of them detonated suicide vests, blowing themselves up. A few others were killed by the locals who discovered them, and several more escaped.

Farhan gets phone calls late into the night, from neighbors on the look-out for more ISIS fighters. These families farm even though their very real enemy is still plotting to kill them.

Young women pick fuzzy okra pods on their family farm. Beyond lies the new hoophouse, that allowed them to grow and sell a bumper crop of cucumbers earlier this spring. Beyond that, an irrigation pond built of concrete block, that allows them to collect water pumped from their well and then out onto the fields.

Beyond that, their home—destroyed in the war with ISIS.

Beyond the farm itself, is Sinjar mountain. A holy place for these Yazidi farmers and their kin. A place of refuge when ISIS killed their fathers and husbands, stole their women and boys.  That mountain is never out of site for these families, and it remains the backdrop when Farhan receives calls late into the night with possible sightings of ISIS fighters, when his community is afraid.

For farmers in Sinjar, this is their form of resistance against terror: they commit themselves again to the land. They plow and plant seed. They water and tend. They harvest and prepare the land to do it all over again.

You can be a part of this beautiful resistance.

Stand with farmers as they reclaim their land and their futures. Give now.

I want to give to create jobs.