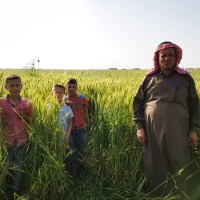 “Our area has the richest soils, our crops are known to be the best. We lived off of this land for many generations, and hopefully for many more generations to come.” Moharram is a man of the land, in a family tradition that goes back longer than anyone can remember. They were always self-sufficient.

“Who would imagine not being able to provide one meal for dinner?”

This is what war does—it disrupts centuries of successful economic patterns, and replaces that with despair.

If you think about it, our images of war are largely urban. It’s easy to see the impact of war on cities—holes blasted through apartment complexes, concrete rubble left after an airstrike, walls pockmarked with bullet holes.

It’s so much harder to show the impact of war on rural areas. How do you show vast tracts of land held by terrorist groups? How do you visualize landmines planted before tall grass grew up and covered the visual evidence?

While it’s not easy to show the evidence of fields laid waste by war, it is easy for men like Moharram to talk about what they’ve lost.

Moharram fled his home to escape war, and ended up living under ISIS control for two years. “We went through the harshest times ever.” Moharram states. It was, as he describes it, “hell on earth.”

“When we came back home, most of our town was destroyed—and it still is destroyed! Our lands were abandoned for 6 years. We were forbidden from farming when ISIS was here. We had no access to seeds or any other equipment in order to farm—not to mention the death penalty we would have received if we thought about communicating with someone outside the village.”

Moharram talked about some of the terrible things he witnessed under ISIS. “I can talk about this for hours,” he said. But the suffering he experienced under ISIS wasn’t just because of the violence he saw. He also suffered because of the indignity of being an experienced farmer, on land, with hungry children, but being unable to plant.

“Farming is our lifestyle—growing green beans, wheat, and cotton.” Then there are the vegetables that he raised and sold, the tomatoes and cucumbers that are daily fare on every Syrian’s table. This family raised crops that were part of everyday Syrian life—beans for inexpensive protein, wheat for their daily bread, and cotton which supplied the country’s textile industry.

Moharram knows how to grow crops. He’s known since he was a child. He’s invested his whole life into being a successful, responsible farmer. And it paid off. He was able to provide a comfortable way of life for his family. Until war came. Then he lost everything, and is just now starting to rebuild his life.

We visited Moharram a couple weeks ago. He walked his planted field with his sons, and with us. We provided the seeds and equipment needed to transform barren fields into land lush with ripening wheat. We see the difference it is making, undoing the violence of war.

We can bring that same hope to Moharram’s neighbors. We can help other families—who see bean fields in their dreams but not on their land—to plant crops that will feed themselves and their neighbors.

Give families like Moharram’s the chance to teach their children how to farm, to continue passing down knowledge learned over generations.