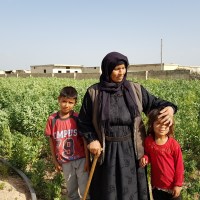 If you ask any farmer about their business, they’ll be able to tell you most anything off the top of their heads. They can tell you when the last time rain fell, and how much. They can tell you what the current market price is for any crop growing on their land. A farmer can tell you how well their seed germinated this year, and when their tractor is due for an overhaul.

Farming is a way of life, but it’s also a business. And even those who plow small farms can tell you what needs to happen for them to make a profit.

Shamsa, pictured above with her two grandchildren, has known farming her whole life. If you ask her to tell you about her farm before war took apart Syria, she still has a running inventory in her mind: two tractors, a complete irrigation system, sheep, chickens, horses, and the very best crops producing high yields in planting seasons.

Their lives were blessed with so much love, she tells us. It was calm. They were successful on this land that their family has farmed for generations.

They are very honest about the hopelessness they felt after so much loss. Misery took over after the active conflict stopped.

Shamsa’s family who survived the war, her son Zobaa (who was seriously injured in the violence) and her two grandchildren, have formed a different kind of family. They are invested in each other, in caring for each other, and in finding a way forward.

For Shamsa and her family, hope came from the very thing that sustained them for generations—farming.

Nothing can make up for the loss of their family members, but hope was felt when tractors rolled over their land again. Hope returned through the plowing and planting the seeds in the soil. Day after day, as the fields turned green and crops were sprouting, hope was growing in Shamsa’s heart again.

Farming was life for Shamsa. Now, farming is returning life to her family.

Shamsa is one of thousands of farmers whose lives were destroyed by years of war in Syria. She is grateful for the way we’ve partnered with her family, “being so caring and knowing exactly what to do to restore our lives back.”

You can help restore fields, market systems, local economies, the generational knowledge of farming at risk of being lost—and the sense of calm and peace that used to mark this land.