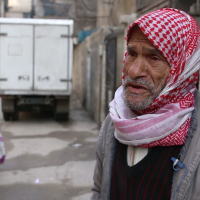 He is a widower who doesn’t want to burden his children. He and his family live in a besieged city in Syria—trapped by war, and unable to care for their children—his children have enough worries of their own.

“Who takes care of your needs?”

“I don’t have anyone helping me… If I don’t go out to get bread, no one would do it for me.”

“Yes, I do. But there is no money. I can’t afford to buy rice, bulger, sugar or tea. Everything needs money. We are content with God’s will, whatever might be.”

The bread he went out for that day—you gave it. 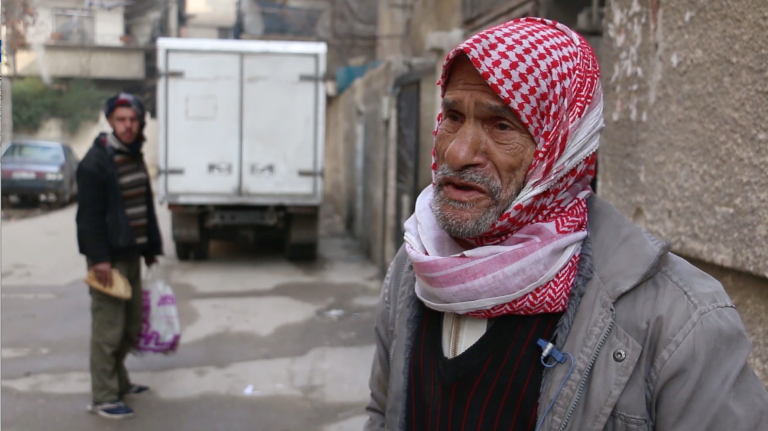 In any city, there are always those who live on a razor’s edge between making it or not. When times are good, it’s easier. There are generous neighbors to help. Generous strangers, even.

But when times are hard… say, in besieged Syrian cities after seven years of war, everyone suffers. Even if those on the margins turned to the generous for help, their pockets are empty, too.

Syrian families are experiencing the grinding kind of poverty that kills.

Last year, the United Nations reported levels of hunger comparable to those found in some parts of sub-Saharan Africa, and the situation has only grown worse since then. 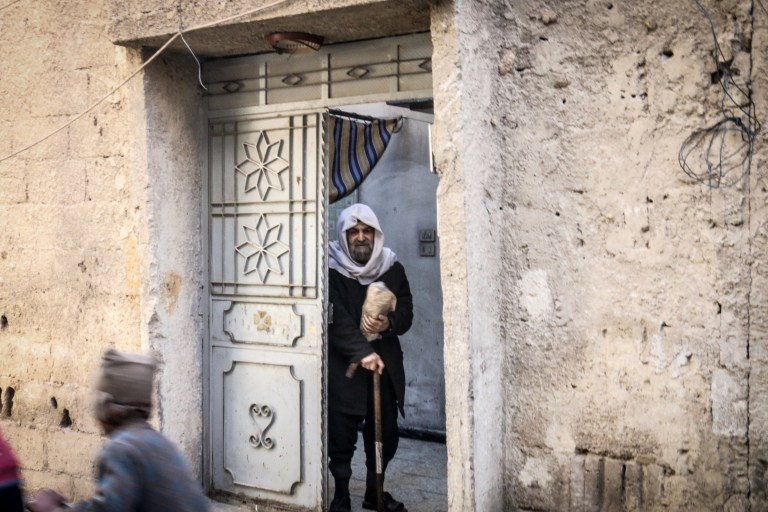 Abo Ratib has lived in this part of Syria for more than 70 years. He lives with his wife, his daughter (who is blind), a disabled son, and his family.

Abo Ratib wears sandals—you can’t help but notice his missing toes. “I’m so happy to get bread on a regular basis now to help control my diabetes, especially with sugar being so expensive.”

The bread he brings home to his family—you gave it. 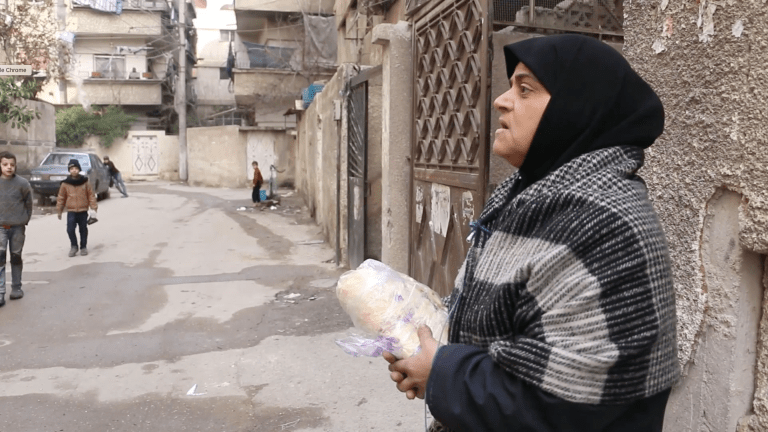 “The situation is tragic,” she said. “I fled… and settled here with my three children. One of them died. Another one got injured, and lost one arm and one leg. Our situation is indescribably tragic.”

She came to the distribution center to get bread for her family. It may have been the only bright spot in her day.

She didn’t even pause before answering. “We only have God beside us. He’s looking after us. The situation speaks for itself—we are barely able to find bread. There is nothing here.”

“Who is the breadwinner in your household?”

“My husband is dead. I only have [one son who can work]… but mostly there is no work.”

“Are you able to cook at home?”

(Food and cooking fuel can be impossible to find in her city.)

“I sometimes put water on bread and eat it. That’s when I have bread. If you want, you can visit my house and see—our situation is tragic. It’s empty. I sold everything to feed myself. And I don’t have firewood for heating. I’m not the only one living like this. We are thankful to God despite everything. And we pray for this to end soon.”

The bread she holds in her hands—you gave it. 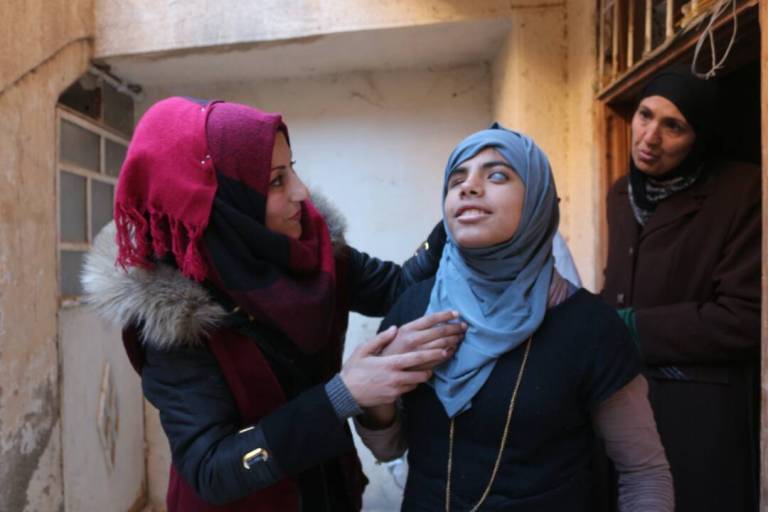 Farhan’s family were poor before war broke out in Syria. He and his wife have four children—all blind. Farhan himself has a heart condition that leaves him unable to work. His daughter Shahrazad, 23 years old and blind, is the only one able to earn money for their family.

With her monthly salary, Shahrazad almost earns enough for the medicine her father needs to stay alive—almost. But there is nothing left for food or other needs. Many nights their family went to bed hungry.

You helped to set up an emergency kitchen in their city, feeding 31,000 people per day, five days a week.

The hot, cooked meal Shahrazad’s family eats every day—you gave it. They’re still living in a war zone, but they can face it with full bellies. 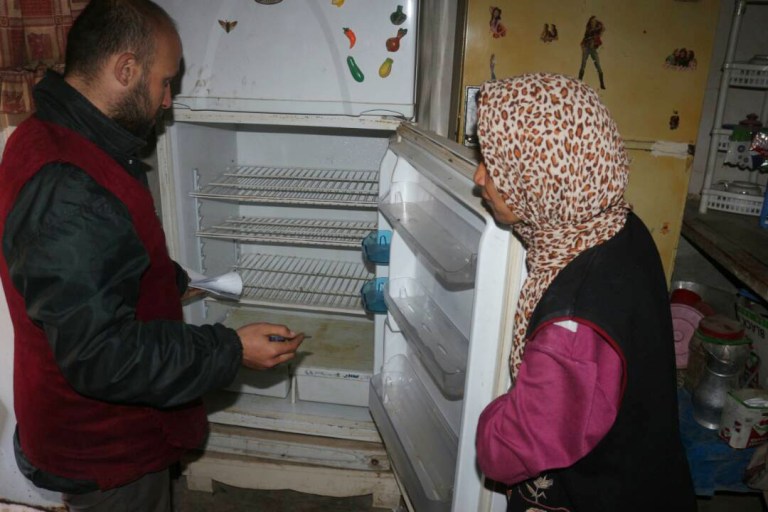 There are no half-empty bottles of sauce in the fridge door. No box of baking soda tucked away in the back corner. In their part of war-torn Syria, there isn’t any electricity to keep the fridge cold anyway.

In theory, she could still use her fridge to store rice and keep mice out of it. But there isn’t any rice either. They haven’t any food at all.

Malik and his wife both have serious health issues—Malik paralyzed from the waist down, and his wife paralyzed on her left side. Because of Malik’s condition, he often smells of urine—their relatives stopped visiting a while ago because of it.

Without any income, without any social safety net in a country ravaged by war, and without the health or energy to climb out of this pit on their own, life was a misery.

The food they eat—you provided it. The regular visits they receive with love—you made them possible.

Their circumstances haven’t changed, but they are able to face each day with a little hope.

We’ve seen some dire situations in our years of serving in the Middle East. But what we are seeing in the worst hit areas of Syria are some of the most tragic. There are so many families just like those we introduced you to here—families whose lives were hard, but with the generosity of neighbours, they got by. And then war came. And the thin razor edge they used to walk got even thinner.

Please continue providing lifesaving food for Syrian families who have no one else in their corner.