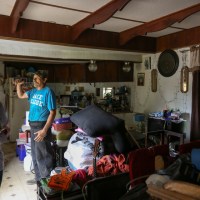 The picture of his precious little face on the fridge still haunts me a little bit.

I didn’t meet Mateo’s 10-year-old son that day in Houston, but his smile claws at my heart when I think of him. To me, he represents some of the deep social injustices that were laid bare by Hurricane Harvey.

We were knocking on doors in Mateo’s neighborhood to test the water for contaminants and our team was receiving mixed reactions. Our armfuls of paperwork and matching t-shirts probably looked frighteningly official to the many undocumented families in this area. Some of them refused to open the door for us. But we weren’t even halfway up Mateo’s driveway before he came out to greet us.

It was notable for people to be walking down his street because, despite the fact that this was the first place to flood, one of the worst-hit areas, and without resources to cope, no one had come to help them.

“No. No one’s come,” Mateo answered. “FEMA was here, but they didn’t help us. They didn’t even want to see my shop. Do you want to come in and see?”

Of course we did. The water could wait a few minutes.

Mateo is an entrepreneur and a mechanic. His shop takes up the entire back half of his property and business was good before the storm. There were seven or eight of his client’s vehicles parked around the huge two car garage where he worked. But they all flooded during the hurricane. His air compressor, tools, and vehicle manuals were also flooded. He’d carefully laid his manuals in the sun to dry, but he knew the truth—they were probably ruined. 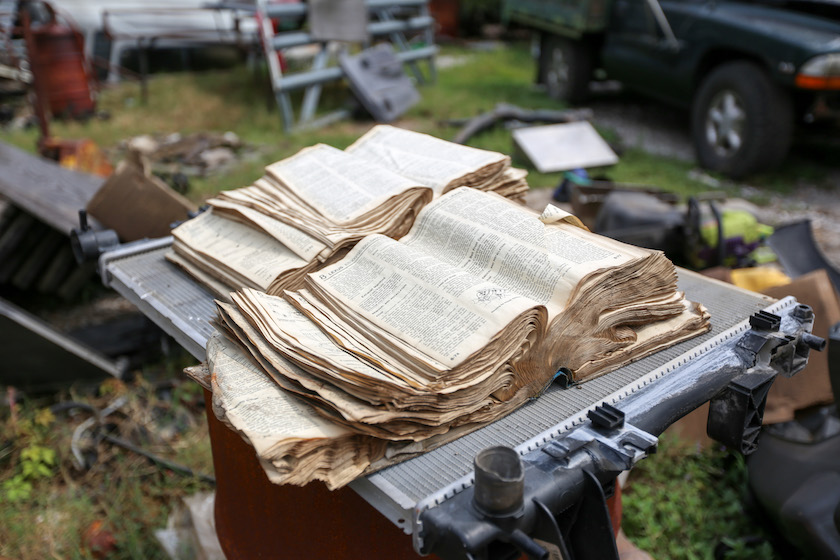 The moment we stepped through the door of his flood-damaged home, I was struck by the cultural mix before me. Amongst the piles of salvaged belongings, I noticed a pair of fancy Mexican cowboy boots sitting near one of those giant foam hands you wave around at football games.

Boxes of Mexican snacks littered the top of the refrigerator, while the front of it was covered in family photos, kid’s drawings, and a couple of One Direction magnets—proof that two teenage girls live here. At the top of the fridge door was a magnetic picture frame emblazoned with the title “Portrait of America” that proudly displayed a stained and faded photograph of an older Mexican couple—her in an apron and him in a giant white cowboy hat. I assume they were Mateo’s parents, but I didn’t want to interrupt his story to ask. 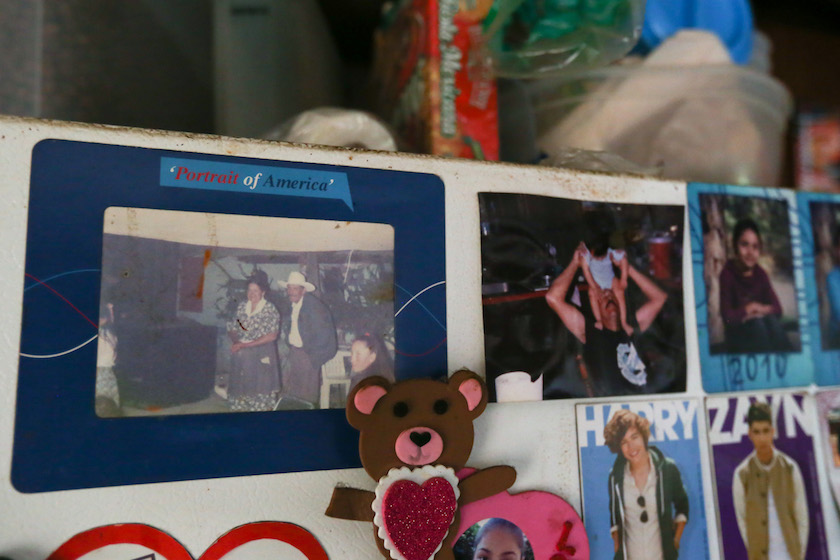 As we surveyed the extensive damage to his home, he told us about his oldest son—now a freshman in college—who is a science genius. Mateo proudly pointed out the ribbons shimmering on every wall of the bedroom, proclaiming his son’s academic achievements. He explained that his son had been accepted into Harvard and offered a scholarship, but Mateo still couldn’t afford the tuition. So now he’s studying chemistry at a community college down the road.

Mateo’s 17-year-old daughter is a junior in high school and he’s immensely proud of her dedication to ROTC. He recently built an addition onto their home—a space for his daughters to study—but that room flooded during the storm and both girls lost their computers as a result.

Then I saw his little face on the fridge. Mateo’s fourth and youngest child, smiling over a chalkboard. In the chicken-scratch that 10-year-old boys call handwriting, he’d written what he wants to be when he grows up: a soldier. 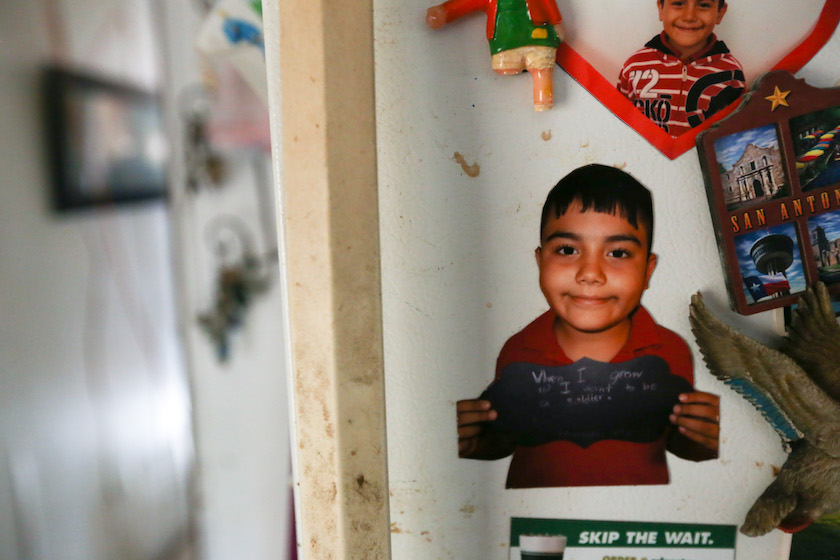 And I lost it. The tears were uninvited, but despite my best efforts, they wouldn’t stay in my eyes.

I stepped outside to pull myself together, but the angry heartbreak that filled my chest followed me out the water-damaged trailer door.

These people, this family, they are the best of America.

Mateo is an entrepreneur who tangibly contributes to his community and our economy. His children are patriots and academics. And his precious 10-year-old son wants to fight for our country… so why isn’t our country willing to fight for them? 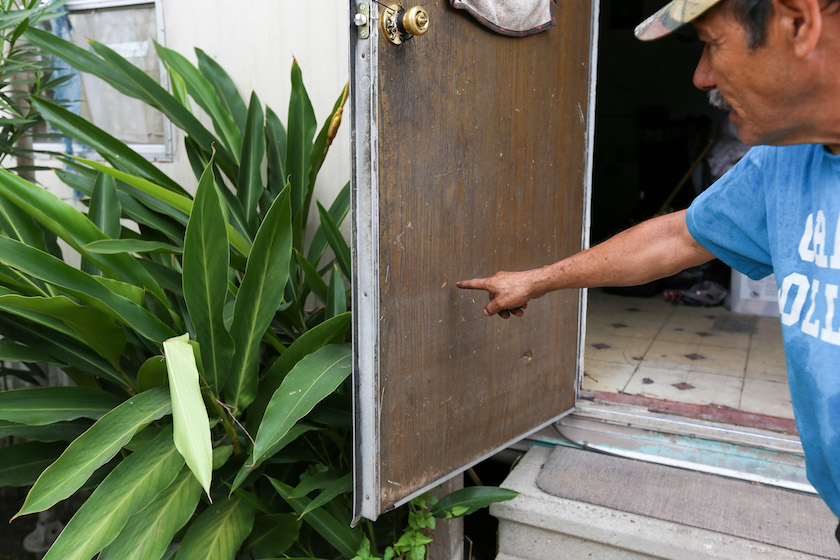 Because from where I was standing, they’re the best Americans I’ve ever met. Honestly, far more deserving of our country’s loyalty than I am. I’m no STEM genius. I’m not out starting businesses. And I’m not raising my hand to serve in our armed forces. And yet, I guarantee you that if my neighborhood flooded, my city, my state, and my country would show up in a heartbeat to help me.

The injustice of it all burned. It seared itself into my mind and my heart as I stood in the dirt outside Mateo’s home. 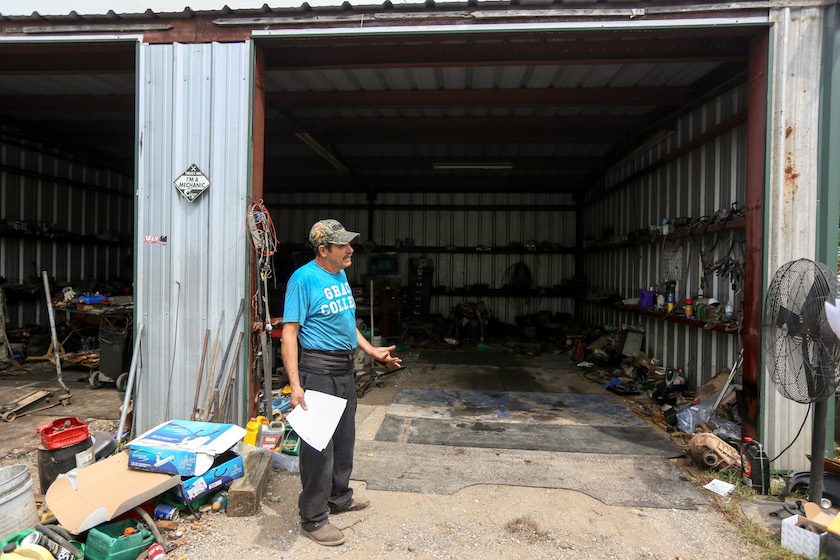 In that moment, the thing that gave me hope and helped me pull it together was that you were there. No matter what our politicians and government choose to do, you keep showing up. You refuse to forget Mateo and his family. You choose to love anyway.

As we were saying goodbye to Mateo, after finishing the tour of his home and shop, he shook our hands and said, “Thank you for coming. And thank you for listening—it makes me feel less alone because you care. I hope to see you again. I hope you come back.”

Since then, you’ve already been back. Multiple times. You provided cases of clean water for him and his family. You tested his water. You’re helping him sanitize his well. And you’re working hard to get him the resources he needs to put his home and shop back together.

Because you’re not just first in, you’re last to leave.

Thank you for standing in the gap for these families.

*Names have been changed for the privacy and security of these families.