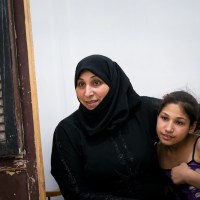 Slow down for a second.

Think about the things pressing in on you, weighing you down, that block wedged between your shoulder blades that just won’t come unstuck. No one else can see it, but it’s there. And it’s heavy. Oh, it’s heavy.

Now think of moments when it wasn’t so heavy. What made the block feel lighter, like maybe it was even gone?

It’s an intensely personal thing to talk about, this block. Rejection, heartbreak, death, loss, betrayal, seeing our children suffer. We may look all right, but that kind of weight has us hunched over.

Today in Syria, I met a woman who has lived with a terrible block on her back. She carries incredible weight with such grace. Heavy and light. Her world isn’t simply one or the other.

Her name is Noora, a Syrian woman named “light.”

The first thing I noticed after her smile were her hands—she reached out and gripped mine. As a son of Texas cowboys, I respect a good handshake. No limp, cold fish handshake from this woman. She has the grip of someone who carries.

Light welcomed us into her Aleppo home with warmth, introducing us to each family member, starting with her very sick mother on the floor.

With each introduction, Noora the Light shared about the family member’s struggle.

“This is my mother. She is so sick and I must always be nearby to care for her.”

“This is my daughter. See the scar on her chest? From when a bomb broke the glass window.”

“This is my husband. He repaired refrigerators, but his tools were looted and now he has no work.”

Noora went around the room, showing us the heavy things she carries, the people she loves, but she didn’t talk much about herself. Like most women we meet here in Syria, the block between her shoulders, the thing that threatens to crush her, is the wellbeing of her family.

Even when we asked questions about her personally, she barely seemed to register the idea.

It’s heartbreaking and beautiful. Should any person have to carry all this? Talk about a block on your back—Noora seemed to have a whole sack of bricks slung over her shoulder.

The conversation continued, and Noora told us how things are getting “lighter.” People are coming home, her neighborhood is coming back to life, the economy is picking up, and her house is becoming more like a home.

You had a lot to do with that.

You provided generators that powered Noora’s house, kept the lights on, powered the fridge that cooled the pineapple juice we drank. These generators restored power to an entire neighborhood of Aleppo laid waste by war.

You helped repair windows, doors, and other fixtures and appliances in Noora’s house. The very window that exploded glass into Noora’s daughter—you repaired it.

Noora was visibly lighter ashen she talked about this. Her hope was evident. The block is still back there, still between her shoulder blades, but you’ve done things in this woman’s life that made it feel a little lighter.

In fact, you’ve helped pave the way for thousands of people right here, in Noora’s Aleppo neighborhood, to get back to life.

The electricity you provide allows people to come home, businesses to start up, and streets to feel safer and more like home.

The windows, doors, and other repairs you provided turned a hollowed-out war zone back into something like home for so many people. It’s hard to express just how powerful it is to be able to open and close a window. After years of looting and ransacking homes, it’s essential to be able to lock your front door.

Many haven’t returned home yet, and that’s OK. But many are coming back, including Noora and her family, and that weight, that block, that heaviness they carry—it’s a little bit lighter thanks to you.

So on behalf of Noora and her whole neighborhood here in Aleppo, thank you. Things here are heavy, but they’re also light. We pray for lighter and lighter days to come.