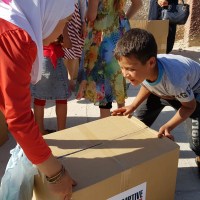 They pushed their heavy food boxes away from the distribution point. They balanced them on bicycles and strong shoulders. Best friends helped to carry food boxes home. In fact, all the village’s means of transportation were shared for this task. Small trucks, motorbikes, bicycles, even children’s strollers were used to make sure that food boxes got home to every family.

There hasn’t been much good news for the residents of Harasta, Syria lately. The war moved on, and many residents returned to their broken city. But it will take a long time for life to get back to normal.

These food boxes you provided—now this is good news.

It was definitely good news for Mohammad and his family. Mohammad invited us home for a cup of tea after receiving their box. Mohammad was shy and grateful. He’s learning how to be the man of the house, learning how to host well, even in the most dire of circumstances. But it doesn’t yet come entirely naturally. Mohammad is still a teenager, a high school student, and now responsible for his mom and five siblings ever since the war took his father.

For those experiencing acute hunger because of a war, locally sourced food provides not only essential nutrition, but also gives the comfort of familiarity. And for so many families, it provides a little emotional break from the never-ending stress. Trying to find enough food to feed your family, with few financial resources, every single day… it wears down even the strongest resident. And it certainly wears down teenagers like Mohammad.

To make the most of the aid delivery, you helped to provide substantial food boxes—enough shelf-stable food to feed a family for a month. Each box contains rice, sugar, oil, ghee, tomato paste, tea, salt, bulgur, dried beans, black lentils, red lentils, and macaroni. When families made their way back home from the distribution points, they carried around 77lbs. of food with them.

Mohammad made it clear that this food relieved him from the challenge of finding food for a month. Now, he can catch his breath, and plan for next month with peace of mind knowing that his family isn’t hungry every night.

Mohammad and his family left Harasta in the midst of war, four years ago. They’re lucky they left when they had the chance to—their house was hit by an airstrike that destroyed it, and certainly would have killed anyone left inside.

Now, they’re back and starting over.

Mohammad hasn’t given up his dreams. At 17, he’s still determined to continue his education, along with working every chance he gets. He has long dreamed of being an electrical engineer. It seems like a distant hope on this day, but looking around at his neighborhood, riddled with the evidence of bullets and bombs, it’s easy to see that his country needs him to pursue his dream just as much as he needs it for himself and his family.

These are the kind of Syrians you’re helping to start over. Families who aren’t afraid to return home, even when life is a struggle. Families who care for each other, sacrifice for each other, invest in each other with whatever they have. And families who stand with their oldest brother, encourage him in his big dreams, and push him to follow his dreams to the very end.

Provide food for Syrian families as they can continue to rebuild after war.