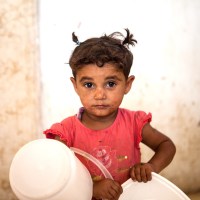 Forget everything you know about being cute…and meet Farah.

She stood at the kitchen counter, just a few years into life, her tiny fists clutching those buckets like her life depended on it. She dropped one pail and a boy almost twice her size snatched it up. Without a sound, Farah walked right up to him, yanked it out of his hands, and got back in line. The food was almost ready and nobody was going to keep her from filling these buckets for her family.

Farah is the youngest of four, scrappy, well-versed in fending for herself. Her father was killed in the war, so now she and her sister fetch food from the kitchen. Farah knows to arrive early to beat the crowds, and after three months of living in the shelter, she knows how to elbow her way to the front when she needs to.

Farah never said one word when we met her. The camp manager smiled down at her and said, “She’s so tough. Cute, but tough.”

She is cute. But after a second thought, the ‘toughness’ of kids affected by war stops being cute. You start to realize toughness is just one of many heartbreaking realities of war. Survival. Toddlers are meant to be velvety, soft, innocent, but many children we’ve met here are a lot more like Farah—leathery and quiet, far from home, born into a country at war with itself.

Then again, they’re still just kids, which you see clearly when they play or laugh or make silly faces for the camera. We laughed a lot with these kids—we even teased a smile out of Farah! The most encouraging thing of all was watching these kids get food. The excitement on their faces would warm the coldest heart, seeing them smell their filled buckets and get excited over meat.

You made that joy possible. You’ve enabled this kitchen outside Damascus to serve a mind-boggling number of people in recent months—18,000 people used to eat here every day! No wonder Farah learned how to get her buckets up to the counter.

We smiled as she toddled away with food. Farah may be cute, but don’t get in her way when it’s chow time. Thank you for filling up her buckets every day.