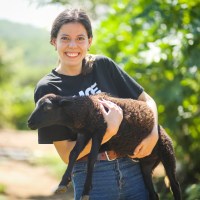 A version of this article first appeared in Journal Vol 7.

Mr. Antonio walks among a flock of chickens, wringing a dried ear of corn and letting the loose kernels fall to the ground. The chickens strut around his feet, fat and glossy—a local breed that quickly gobbles up each kernel. All around Mr. Antonio, the land wears a shocking green that hardly seems real. It’s lush, but until recently, it was simply another beautiful view in rural Venezuela.

A view doesn’t help fill the empty bellies of families in this neighborhood. It doesn’t provide money to buy groceries when the minimum wage has fallen to $3 a month—at the same time that hyperinflation means the average family needs more than $300 to buy the food they need.

A beautiful view doesn’t keep families from making the dangerous, irregular crossing to nearby Colombia in search of more affordable goods. And it doesn’t stop them from moving away to faraway countries in search of jobs that might help support their families, leaving terrible gaps in their communities back home.

It’s enough to break anyone’s heart, especially the heart of one local pastor.

Pastor William loves his community. He wants to meet more than spiritual needs alone, so he came up with a plan to farm a few plots of land with nutritious food that could feed his neighbors. He just needed support to make his dream a reality. He needed a community of people who would come alongside him and join him in doing whatever it takes to stop the spread of violence. And that’s how the Preemptive Love community of peacemakers stepped in.

Because at the end of the day, finding a way for these families to stay instead of fleeing reduces the risk of violence in their lives, and at the border.

Soon, the Preemptive Love community had prepared and planted the land, built a chicken coop to house some fluffy chicks, and invited neighbors like Mr. Antonio to care for them. Plants grew quickly, and it was time to harvest the first crop. A good crop. An abundant crop. Which led to serious challenges in an area with little electricity or refrigeration.

This plentiful harvest would feed neighborhood families for a few days before the extra spoiled. And then what? How to guarantee more variety and the need for more stable nourishment over the coming weeks and months after the harvest?

Pastor William’s dream wasn’t yet a reality. It was time for a pivot.

The farm continued (and expanded, adding more crops), but now, community members sold the abundant produce to wholesalers. With the revenue from farm harvests, Pastor William purchased shelf-stable food that could feed neighbors with greater variety, for much longer.

This is how our community of peacemakers in Venezuela partners with neighbors to serve long-term needs. And visible partnership creates an invitation: When a neighbor saw the need and the farm’s great potential, he donated hundreds of 5-month-old chickens, some already laying eggs. It was a vital boost to the farm, and it drew neighbors closer together.

Pastor William has plans in the works for pumpkins, papayas, and pigs. But even in the early stages, this farm is a success. Lush fields overflow with nutritious food. More families can stay home rather than set out on risky border crossings because now they can feed their families. And strengthened connections are helping neighbors care for each other in practical ways, making communities more resistant to violence.