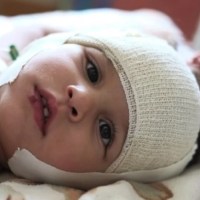 Last month’s bombardment of Gaza killed dozens of children and left many more hungry, vulnerable, and living in terror. You are responding.

The bombardment of Gaza last month killed at least 67 children. But the real cost of war runs much deeper than body counts.

It’s kids who don’t have enough to eat, because violence disrupts even the most basic routines. It’s children who live in constant terror—for whom the nightmares do not stop when they wake, for whom the sound of bombs still ring in their ears, even after the ceasefire.

To put things in perspective: for a 13-year-old child in Gaza, this is the fourth war she has lived through. Gazan children have never known life not under a blockade.

And right now, half the people in Gaza are at risk of not getting enough to eat.

The damage of war does not stop when the bombs stop falling. But neither does your love.

Within hours of the ceasefire, Preemptive Love monthly donors—members of this community of peacemakers—deployed an initial $100,000 to a hospital in Gaza working furiously to care for children. You helped launch an emergency response reaching kids under 5 who are dangerously malnourished because of the recurring violence.

A 3-person medical team—one pediatrician, one nutritionist, and one nurse—have already screened some 500 children. They found that more than 1 in 5 are malnourished. These kids are now getting 3 months of nutritional care, so their bodies can heal and grow like they’re supposed to again. The team is also working to increase the ability of parents and caregivers—who have done everything imaginable to protect their little ones—to better meet their nutritional needs.

At the same time, 39 kids are now getting psychosocial care—therapeutic play, relaxation exercises to cope with anxiety, and professional counseling if needed—because some of the deepest wounds of war are the ones you can’t see. These wounds cannot be mended in a moment.

The children getting care right now lived through some of the worst bombardment during the latest war. There was no escaping it in Gaza, one of the most densely populated places on earth. Now they have a chance to process their pain and begin to heal.

We know the future is heavy and hard in Gaza. There is little reason to believe the same pattern of violence we’ve seen four times in the last 13 years won’t repeat itself again at some point. For many in Gaza, any talk of “peace” or a “peace process” seems utterly and cynically detached from the reality all around them.

And yet— this community doesn’t give up. You keep showing up. Standing in solidarity with our Palestinian friends. Making sure they have what they need to care for their little ones. To heal from the violence all around. And perhaps most of all, to know they are not forgotten or alone.

The world has ignored Gaza far too long. Every once in a while, another wave of violence—and the catastrophic toll on civilians—grabs our collective attention once more. But it always fades, because it’s easier to forget than confront the reality that families in Gaza face every day.

Let’s be the community of peacemakers that doesn’t forget. Let’s keep standing with our friends in Gaza. Let’s keep choosing to love in the hard places.

If you’re not a member of our community of peacemakers, make your first monthly gift today. To care for children in Gaza. To stop the spread of violence. To end war.