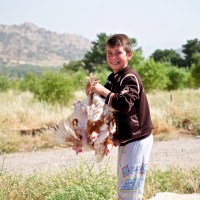 You may not believe this looking at his face up there, but Adnan comes from a long line of farmers and shepherds—his family has cared for animals for generations.

“How do I hold them?!” he shouted, originally trying to hold one by the wings. (The chicken wasn’t into that.) The truckload of egg-laying chickens you sent to Adnan’s community had just about everyone at the camp ecstatic… apart from Adnan.

The more chickens he was handed, the more nervous he became. “Someone take these from me!”

Adnan’s grandfather gave him a look, half humored, half exasperated, as he showed him how to hold them by the feet to avoid hurting them. How had this farmer boy managed to grow up afraid of chickens?

The answer is simple: Adnan and his family left their land and animals and lives behind when they ran from ISIS. 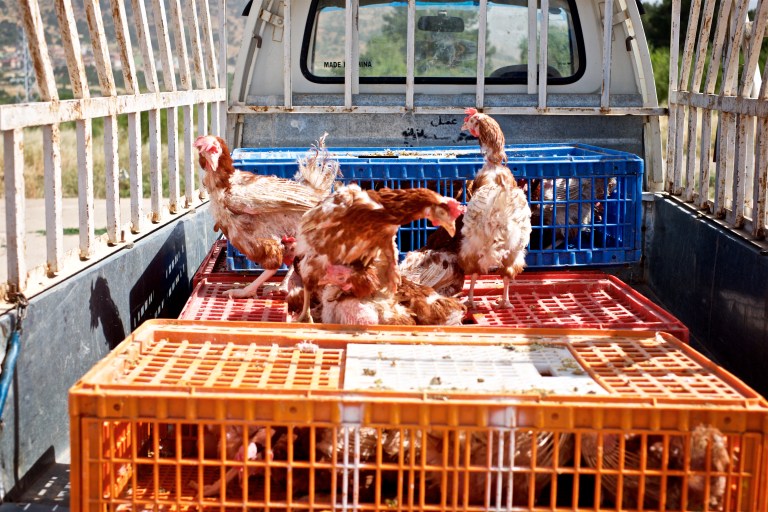 It’s a big, scary word we’ve used before when sharing about Adnan’s people, the Yazidis. But have we ever unpacked it?

Genocide is much more than mass murder. According to the United Nations, it’s the targeting a particular group for physical and/or mental harm—and that includes harm to their collective identity.

ISIS isn’t just set out to kill Adnan and his people, they want to erase their whole identity. Their places of worship, their books, and any other hint of their existence. ISIS wants the Yazidi people to exist only in history books… and there’s a good chance they’d burn those as well.

Adnan’s ability to care for his family’s land, to nurture animals, to go to school, to grow and learn and someday marry and care for his community—ISIS tried to destroy all of that.

Why is this farm boy terrified of chickens? Because he’s estranged from his home, his entire way of life. He lost his farm boy status. Now he’s a refugee.

We laughed at Adnan’s chicken antics at first, but as I drove away from his camp, it didn’t seem as funny anymore. It was a clear reminder of how much damage is done to people when they’re forced to flee violence—and this is true of children more than anyone else.

“At least they’ve got eggs and steady protein now—chickens will help with that,” I remember someone saying. 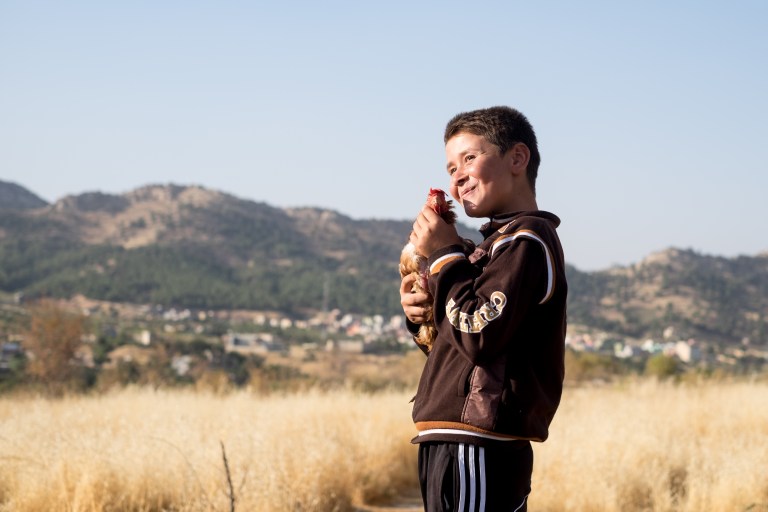 A few months later, we got to visit Adnan again, and I barely recognized him. He’d gone from being a chicken to raising them—the Chicken Master!

With pride in his face, Adnan’s grandfather told us the boy was now just as comfortable around chickens as he was around people—and maybe even more so, considering the fact that he’s kissing the chicken in that photo!

When we invite you to provide chickens or sheep to a refugee family, we aren’t just looking for some excuse to ask you to give. These animals aren’t token gifts; they can change a person’s life. They can turn communities upside down. They can restore generational knowledge lost to war. They can restore a child’s identity, just like they did for Adnan.

Caring for animals is a proven form of therapy for people who’ve endured trauma. It offers lonely, bored children a friend. It offers farming families a new tie to the land. It gives them a sense of home and place, even in their displacement. It offers them routine and structure and a financial asset they can sell off if there’s an emergency—or take home with them when their land is liberated.

Chickens are powerful, friends. We’ve seen it, and on behalf of Adnan and thousands like him, thank you for helping provide these beautiful animals. 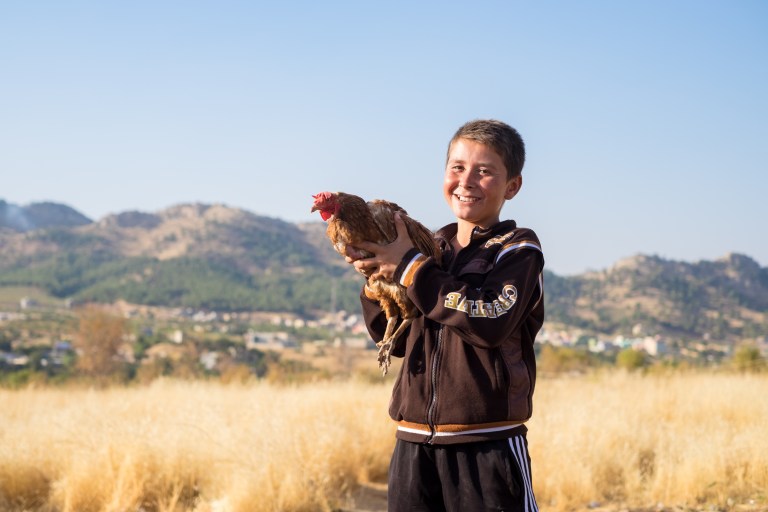