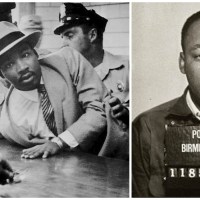 Your newsfeed is probably filled with MLK memes and quotes today. And there’s a danger in that.

The danger in how we memorialize iconic figures like Dr. Martin Luther King, Jr. is that we end up sanitizing them. We commemorate the more palatable parts of their legacy, the parts that don’t cause any disruption or discomfort for us, and we ignore the rest.

This MLK Day, let’s go beyond inspirational memes. Let’s go farther than “I have a dream.” Spend time reading something from Dr. King that you haven’t read before. The King Center in Atlanta has a vast digital archive of his speeches, sermons, and writings.

Here are three places you can start…

“I would rather die than hate you.”

In this 1957 sermon, Dr. King issued a challenge to a “power-drunk generation,” while at the same time offering a roadmap for nonviolent resistance to oppression.

“There are three ways that individuals who are oppressed can deal with their oppression. One is to rise up against their oppresses with physical violence and corroding hatred. No, this isn’t the way, for the danger and weakness of this method is its futility; violence creates many more social problems than it solves… violence isn’t the way.

“Another way is to acquiesce and to give in, to resign yourself to the oppression… that, too, isn’t the way because non-cooperation with evil is as much a moral obligation as cooperation with good.

“But there is another way and that is through organized mass non-violent resistance based on the principle of love. It seems to me that this is the only way… we must discover the power of love, the redemptive power of love. When we discover that, we will be able to make of this old world a new world.”

In this speech, delivered less than a year before he was assassinated, King addressed the “three major evils” of racism, poverty, and war.

“I am absolutely convinced that there are persons in our country today more concerned about winning the unwinnable war in Vietnam than about winning the war against poverty right here at home. And this is a great tragedy facing our nation. There is a need for a radical reordering of priorities.

Letter From a Birmingham Jail

Originally written on the margins of a newspaper smuggled into the jail where King was imprisoned in 1963, “Letter From a Birmingham Jail” was a response to “A Call for Unity” by eight white clergy who opposed the civil rights demonstrations taking place.

“I guess it is easy for those who have never felt the stinging darts of segregation to say ‘wait.’ But when you have seen vicious mobs lynch your mothers and fathers at will and drown your sisters and brothers at whim; when you have seen hate-filled policemen curse, kick, brutalize, and even kill your black brothers and sisters with impunity; when you see the vast majority of your twenty million Negro brothers smothering in an airtight cage of poverty in the midst of an affluent society; when you suddenly find your tongue twisted and your speech stammering as you seek to explain to your six-year-old daughter why she cannot go to the public amusement park that has just been advertised on television, and see tears welling up in her little eyes when she is told that Funtown is closed to colored children, and see the depressing clouds of inferiority begin to form in her little mental sky… when you are harried by day and haunted by night by the fact that you are a Negro, living constantly at tiptoe stance, never quite knowing what to expect next, and plagued with inner fears and outer resentments; when you are forever fighting a degenerating sense of ‘nobodyness’—then you will understand why we find it difficult to wait.”

Let’s not limit our awareness of King’s legacy to one speech—much less one line from one speech. There is so much richness to explore, so much that resonates today as much as it did 50 years ago.

“We Will Not Be Silenced” photo of three women by Alisdare Hickson / CC BY-NC 2.0

“We Are Praying With Our Feet” photo by Jamelle Bouie / CC BY 2.0