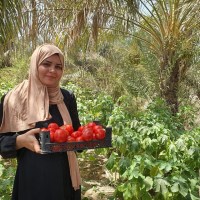 Akram wiped the blood from his face, determined not to give up. If the police beat him again, he would continue protesting until the economic situation changed. He and his friends, all college graduates, didn’t have any job opportunities. Akram lives in Muthanna, southern Iraq, where 52% of people live in poverty, and one out of five people are unemployed.

Muthanna is an agricultural province, but drought, disease, and a lack of government investment have decimated the agricultural industry. The average yearly rainfall has decreased by ten percent in the last 20 years, making wells run dry. As a result, Muthanna has the highest poverty and unemployment rates in Iraq. Graduates with degrees in agricultural engineering can’t find jobs in their area of expertise, deepening poverty, and increasing displacement. Some desperate people are tempted to join the drug trade or a local militia in order to survive.

The war in Ukraine has made life even harder in Muthanna. The 2021 droughts caused wheat crop failure for 37% of Iraqi farmers, which meant Iraq had less grain stored for this year. Russia and Ukraine supply almost 30% of wheat to the global market. The war has made the price of wheat imports increase by nearly 50% from last year. The Iraqi government used to subsidize nine kilograms of wheat per family per month, but now it subsidizes wheat every two months.

So many young people feel mired in problems, and we find that most people have their own solutions. They have the knowledge and skills to be successful. What they need is help to get to their solution. In Muthanna, the families of many agriculture engineering graduates own land, and have the knowledge to farm it, but lack the resources to start cultivating it.

Akram was one of those young people. Although he joined many protests to try to pressure the government into creating jobs, which often put him in the hospital, his economic situation did not change. He was jobless and relied on his brothers, who were working. Akram owned land, but he did not have the resources to cultivate it. Thanks to our community of peacemakers, now he does. With an initial investment from you, Akram has a healthy okra farm, which gives him financial independence from his family. This past summer, he earned $40 weekly from selling his okra in the local market.

Mohammed has a farm with a small river but he could not work the land full time. He had to work as a construction laborer to support himself and his family. We wanted to invest in his farm but doubted his river would provide enough water to grow much wheat. Mohammed assured us he would manage, so our community of peacemakers provided an initial investment. Mohammed planted wheat and continued to work as a day laborer as it was growing. With his first crop, he was able to cultivate 15,000 square meters of wheat—way beyond our expectations. His secret? He had watered his crops at night when the sun would not evaporate the river water, a sustainable technique he had learned through experience. He was able to quit his laborer job and devote himself full time to his farm.

Cultural traditions in Muthanna discourage women from working in any business, especially in agriculture. Female-led farms were practically nonexistent here until you showed up. With your help, we were able to meet with families whose daughters had the knowledge and skills to farm their land. After talking with these families and receiving their support and blessings, we gave their daughters an initial investment. Seven of the first ten agricultural projects our community of peacemakers invested in are currently run by women.

Roha, an agriculture engineering graduate, contacted us through a messaging application popular in the Middle East. She told us she had land, a water source, and a plan. What she needed was funds to make her plan work. After we evaluated her potential for success and sustainability, we made our investment. Two months after receiving funding, Roha had okra and tomatoes selling in the market. Not only is Roha able to support her family, but her produce also helps alleviate her community’s dependence on expensive imported food.

Like Roha, Samira also had land but lacked start-up funds. Her husband worked with the defense ministry and was often away in dangerous places. Samira wanted to support her husband through farming so he could take a less dangerous job. We decided to support her project, and now Samira’s okra crops are thriving. She is very hands-on with her plants, treating them with organic, traditional techniques she learned from her father.

Providing startup funds for agricultural initiatives like Mohammed’s, Roha’s, and Samira’s fills the gap between seemingly impossible problems and solutions. So far, we’ve been the gap fillers for more than 15 agricultural projects in the Muthanna region, which provide stable incomes for families by enabling people to do what they do best.

Filling gaps has had a mighty impact on the agricultural sector in Muthanna, Iraq, and the local government has noticed. Its commendation of our community of peacemakers’ work will make starting future projects easier. We are already investigating expanding our agricultural projects to an area south of Mosul, where the soil is fertile and the Tigris provides ample water.

Sometimes, the world’s problems can feel insurmountable, creating an “I don’t know how to help” feeling. But making a big impact doesn’t always mean putting forth a great effort. Sometimes, all that is needed is to fill a gap. For friends like Mohammed, Roha, and Samira, a small investment will continue to pay off for years in the harvests to come.

Join our diverse community of peacemakers who are building a world where everyone rises.