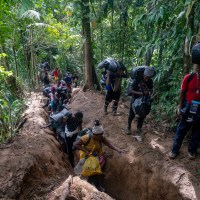 Tens of thousands wait for a chance to cross the infamous impenetrable, lawless jungle region between Colombia and Panama

Necoclí, Colombia—Wilson hunches over a pile of wet sticks and leaves he has been trying to ignite for the last two hours. The plan is to cook arroz con arroz, rice served with rice, a dark joke as that is the only food he carries, but after two days in the virtually impenetrable Colombian jungle, everything he owns, as well as all the kindling he can find is soaked.

He has been traveling for two days into the infamous Darien Gap, the roadless no man’s land that separates Colombia and Panama. It is a smuggling corridor for the armed groups that control it. It is also one of the most dangerous migration routes in the Americas. And as countries reopen borders that have been closed for more than a year across the continent due to COVID-19, tens of thousands began trekking north.

Once the fire is finally lit, he pours the last of the bottled water he has brought with him into a pot, which he boils for the rice. Just as the rice is nearly finished, a heavy downpour puts out his small fire. He portions out the semi-cooked grains to the small group he travels with, a group of migrants who have been traveling over a month from Chile. One of the women is extremely pregnant and has been having difficulty on the trail.

Wilson gives her the largest portion.

They will be traveling through the Darien Gap for at least two more days before they reach Panama. From there the journey hardly gets easier, they have 5 more borders and 4,000 more kilometers to cross before they reach the United States. They will have crossed an entire continent by land by the time they arrive at the Rio Grande— if they make it.

Some will be deported back to Haiti from the countries they must cross to reach the US. Others will likely be arrested for immigration violations. Many will likely be victimized by the countless criminals and armed groups that control the informal checkpoints that lie ahead, and without resources be forced to stop and work before they can continue.

Of those that do arrive, many will be deported by US border patrol—which deported over 9,000 Haitians in September alone, part of a policy installed during the COVID crisis called Title 42, which some experts have called a violation of international law.

But Wilson isn’t thinking about that part of the journey. For now, he must survive the jungle crossing, a trip that will take him deep into stateless territory controlled by one of Colombia’s most powerful narco groups— the Clan de Golfo.

The informal guides have permission from the Clan de Golfo to bring the migrants as far as the Panamanian border, a privilege for which they must pay “taxes,” a cost passed on to the migrants.

Once they reach Panama however, they will be on their own and will pass through territory controlled by a patchwork of smugglers and criminal groups. For most, it is a journey of 4 to 6 days, but Wilson’s group is moving slowly, and they are almost out of water.

A plaque nailed to a tree announces the Panamanian frontier, giving a false optimism that we have actually arrived somewhere. In reality, the migrants are still in the middle of the jungle—and 2 – 3 days from the closest town, depending on their speed. The informal guides they have hired bid them goodbye. They don’t have permission from the Panamanian smugglers on the other side to enter their territory. From here, the migrants, who are primarily Haitian but also include Cubans, Venezuelans, and a few West Africans continue alone, disappearing into the jungle.

Panamanian officials have recovered 50 bodies so far this year in the Darien Gap, more than double than 2020, but they believe that is only a small portion of those who have died making the trek, as most deaths go unreported and the remains are never recovered. More than 90,000 Haitians have been processed so far this year by the country’s immigration officials.

The massive flow of people has created a bottleneck in Colombia. Thousands of people wait, many for as long as a month, in the nearby northern coastal town of Necoclí for their turn at buying mandatory passage from migration officials that will take them to the staging area before the Darien gap.

As part of an agreement between the Panamanian and Colombian governments, only three to five hundred are allowed to cross daily. Yordany Herrera, a Cuban who has traveled here from Chile waits camped in a tent pitched on the beach, along with thousands of other migrants, who are unable to find housing in the town, which is overflowing with migrants.

“I’ve been here two weeks,” he said, explaining that he must wait two more weeks for the date of the government-mandated boat ride he has purchased. “It doesn’t make sense to me. There are children here, pregnant women. Why are they making us wait?”

“Perhaps they are just trying to punish us,” he continued.

The United Nations estimates that over 91,300 migrants, mostly Haitian, crossed into Panama through the Darien Gap this year. Over 20% of that number were children, up from 2% in 2017.

Of the direct arrivals from Haiti, most said they were migrating because of insecurity rather than economic reasons. Haiti has seen a massive rise in gang violence and political instability in recent years, culminating in the assassination of their president in July.

Many do not have the necessary documents to apply for visas in Mexico and choose to start further south in hopes that overwhelmed border officials will be more forgiving to migrant caravans crossing by land, a hope borne out in practice in recent months throughout Central America.

Dearson, a young Haitian who declined to give his last name, has been traveling for over a month. He lived in Santiago, Chile for almost two years, working under the table. He cited rising xenophobia and racism there for his decision to travel north to the United States.

“COVID made everything worse,” he said. “The media says we are criminals, and one can feel an almost invisible discrimination that just gets worse and worse.”

Dearson smiles continuously, despite the fact that he has been sharing a single room with five other migrants for the last month.  “They keep raising the price,” he says. “If we don’t leave soon we’re going to run out of money.”

Doctors Without Borders, which maintains a post on the Panamanian side of the border, reports that many of the people emerging from the Darien Gap emerge with nothing, having been robbed in the jungle smuggling trails. Others have drowned trying to cross the many rivers or succumbed to disease.

Some emerge shoeless, suffering from severe dehydration, or ill from being forced to drink unclean river water. Some simply never emerge at all.

A few weeks after Wilson crossed into the Panamanian jungle, he sent a voicemail to say he had successfully crossed Panama and Costa Rica by bus. The group he traveled with was waiting at a processing checkpoint to enter Nicaragua. His excitement was palpable.

“We did it!” he exclaimed. “The hardest part is over!”

But that may not be true. Reports of migrant camps in Mexico are shocking for their conditions, as is the treatment Haitians are receiving from the government there. And Wilson’s group has yet to make it to the US border, where just a few weeks ago Border Patrol made international headlines for its abuse of those seeking a better life.

Wilson, however, was undeterred. “I will write to you when we’re in the US,” he said. He hopes to meet family in Los Angeles, learn English and build a better life.

“Nothing can be worse than what we went through. I know God will show me the way.”

This is the fourth in a series of posts that explore why our Haitian friends in Mexico, struggling to find a secure place to call home, are in the situation they are today.