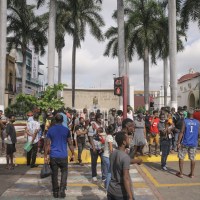 “We’re being invaded. We’re overrun. We have a porous border.” Carlos, a local business owner, is honest about what he hears in town since so many migrant families began arriving. Maybe you hear the same comments where you live. It isn’t always easy to see the place where you grew up change quickly.

Whether it’s Texas, London, or Tapachula, Mexico—–a city on Mexico’s southern border which has become pivotal in the migrant route north to the US border—–when the faces you see as you go about your day change seemingly overnight, it can feel unsettling.

In April, the US government struck a deal with Mexico, Guatemala, and Honduras designed to slow the rate of migrants arriving at the US southern border seeking asylum. “The objective is to make it more difficult to make the journey, and make crossing the borders more difficult,” White House press secretary Jen Psaki stated. As a result, the city of Tapachula has seen the more than 63,000 migrants who traveled there on their journey north, unable to continue for months at a time while taking a different kind of journey—through bureaucracy. The wait for the right papers, proving the migrants have applied for asylum status and gone through the proper channels, is deliberately slow.

As you walk through downtown Tapachula, one in five people you see is a migrant desperately hoping for a better life. When the majority of migrants were from Central America, they blended well with the local population. You couldn’t “see” the crisis. But when more migrants from Haiti began the same journey to the US border, suddenly the crisis could no longer be hidden.

It’s a Wednesday, and the line formed outside the bank is a hundred deep. Those in line are exhausted and restless—some of them tell us they’ve been in line for three days. This bank, and the others in this town near Mexico’s border with Guatemala, have struggled to keep pace with the demand for services. Unlike those migrants who can blend into the local population, Haitians can’t work while waiting for their paperwork to be completed. They rely on funds sent by relatives and friends. And the only way to access those funds is through ill-prepared local banks.

This is exactly the kind of situation where friction sparks in the local community. The Haitian migrants have access to money they could spend in local businesses, but they can’t actually get it into their hands. Local residents don’t want to wait behind a hundred strangers to do business with their bank, or any other service. To placate residents, a separate line was made for non-locals. And that line never seems to move.

“Soon the reality is going to change, and there’s a lot of fear because there are too many of them,” Carlos explains how many local residents feel. “They are in the city. They speak a language we don’t know. We don’t know if they are happy, if they are attacking, or if they are talking nonsense.” As Carlos continues, he gets to the heart of residents’ fear, Tapachula “has always been a town of nomads, with a very highly fluid population. Always. People who are really fleeing from a guerrilla…or are part of a guerrilla?”

Residents are tired. And afraid. They don’t want the violence that migrants are fleeing to come to their doors. That’s natural. And it’s easy to assume that this was always the way it’s been in Mexico—that there has always been this fear. But that’s not the case.

Mexico was a refuge for those with black bodies.

It’s the early 19th Century, and Mexico has long been fighting. Fighting for freedom from Spanish colonial rule. Fighting for an end to the enslavement of thousands brought from Africa, and the social caste system that unfairly oppresses Indigenous Mexicans.

In a revolutionary move, Mexican President Vicente Guerrero conditionally abolishes slavery in 1829 (five years before Canada and 36 years before the US). President Guerrero, having African heritage himself, understands what’s at stake. Change doesn’t come instantly, but Mexico becomes a refuge for those who run away from enslavement in the United States. In fact, the southern route of the Underground Railroad is so successful that the US Congress attempts to negotiate a treaty with Mexico for the surrender of fugitive slaves.

It’s today. You’re driving out of Tapachula and see a large white bus, and half a dozen police cars. Mexican officials are rounding up migrants walking along the side of the road headed north. Families are forced into the white bus, now afraid, their babies crying. No one will tell them what will happen next. They eventually learn that they are entering the months-long bureaucracy that makes so many migrants feel trapped.

This is where we choose to be. This is one of the places where it becomes tangible—our community of peacemakers. This is where local residents, not bound by fear, come alongside those on the run who know too much about fear and are joined by you and me to create moments of refuge—all of us giving, all of us receiving, all of us contributing to a world without violence.

This is the fifth in a series of posts that explore why our Haitian friends in Mexico, struggling to find a secure place to call home, are in the situation they are today.