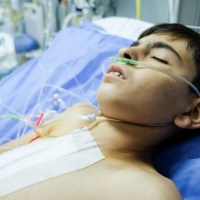 When Hatem first woke up in the ICU, he asked a simple, beautiful question…

He was pointing at his chest, tapping his finger over his heart.

As if fleeing ISIS extremists wasn’t enough (hear more of his story here), Hatem went through a surgery years ago in Turkey that was supposed to have fixed his heart. Despite what the adults may have told him, Hatem was perceptive enough to know that his heart still had a problem, the surgery had failed.

Now, that whispered question: “Is it finished?” The nurse explained that his operation was a complete success—a total correction.

This is one of the many recent happy endings we’ve seen in Iraq, and it’s thanks to the generosity of donors like you! Would you consider giving toward our surgical programs so more persecuted, displaced children like Hatem can enjoy the knowledge that “it’s finished”? Give here: