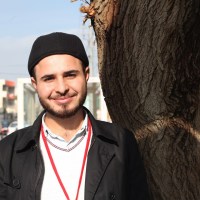 When he was younger, Sulaiman dreamt of being a geologist. He was fascinated by the landscape of Syria. Captivated by the idea of working in nature, outside the confines of an office.

For a while, he was living out his dream, studying geology near his hometown in northern Syria. Then war broke out and everything changed.

Most of us start to plan our lives when we are young. We imagine how it will feel to graduate from university and step into our first job, envision where we will live, and the many ways we can leave our mark on this world.

As adults, these childhood dreams never go according to plan—and as life throws curveballs and challenges our way, the future we once imagined takes on a very different shape.

When navigating the ebbs and flows of life, we often show a unique combination of resilience, adaptability, and patience, growing from past pains and refusing to simply give up. Sulaiman’s journey from Syria to one of our WorkWell tech hubs in Iraq—the creative way in which he faced the curveballs—it embodies this remarkable element of the human spirit to its core.

Almost a Bullet in His Back

He was in his first year of university when protests broke out and conflict enveloped his country. Checkpoints started appearing around this hometown and along his route to university, armed by government troops who viewed him with automatic suspicion.

Armed soldiers saw him as a threat, a potential opposition fighter. One interaction springs to Suleiman’s mind; the time he was accused of belonging to a Kurdish militia in Syria. He was able to narrowly escape without being shot dead in the back, by impressing a soldier with his geological knowledge of a nearby landscape and sharing a pack of cigarettes.

Sulaiman’s chance to be in nature and explore Syria’s geology dwindled as war intensified. A once-simple commute to university became increasingly dangerous.

“During the war we couldn’t get out, just staying inside and studying,” Sulaiman remembers.

On top of the perpetual fear of being shot at a checkpoint, Suliman struggled to keep up with the skyrocketing cost of living in a war zone.

“Everything became expensive, and I had nowhere to work,” he says. His father had died a few years before, and without work to support his family, Sulaiman put his university degree on hold and looked to Iraq for opportunities.

“If We Stayed… You Have to Kill People.”

He was 19 when he made the journey to neighboring Iraq, young and out of options back home.

“We had to come. We didn’t have work, if we stayed there they will take us to the military, if you go to the military you have to kill people, innocent people. That is a problem,” he says.

His new life was far from the days he spent as a university student in Syria. Here he was one of thousands of refugees living in a camp and searching for work in a country that doesn’t have enough opportunity for those who already live here.

“When we come from Syria, everyone loses their goals, they don’t have anything to do,” he says. “When I come here, there is a spark that can show you the way. How to become better than you were and to continue your life, to forget about the problems in Syria.”

Sulaiman was forced to move on from life in Syria and his dreams for the unfolding years. In this new chapter he was a refugee, and with that everything changed.

“You don’t know what life is hiding from us, you just have to continue,” he explains. “You don’t know where you are going to be tomorrow, so you have to stay alive and make new goals every time. When I was in Syria, I wanted to be a geologist. But it didn’t happen and I did not stop.”

Stop he did not, it wasn’t in his nature. Instead, Sulaiman created new hopes and aspirations within the life that he found himself. Eventually he found a job in construction, then in painting and later on, he began working in security for an aid organization. For him, each job was a new experience, an opportunity to learn and grow.

A New Way to Make a Life

In 2017, Sulaiman heard about a new way to make a life for himself: WorkWell, a tech space for young refugees to learn high-demand skills and access the digital marketplace beyond Syria and Iraq, so they can become entrepreneurs, coders, or freelancers.

English and computer classes brought a renewed sense of energy, reminding Sulaiman of his goal to remain adaptable and never give up.

“When we come from Syria, everyone loses their goals, they don’t have anything to do,” he says. “When I come here, there is a spark that can show you the way. How to become better than you were and to continue your life, to forget about the problems in Syria.”

Sulaiman didn’t stop at being a student. Now he works as an assistant teacher at WorkWell, passing on his knowledge to other young men and women who have faced many of the same challenges intertwined with war and displacement.

It was never work he imagined for himself, but Sulaiman has discovered an inner talent that previously lay dormant.

“My father was a teacher; because of that I said I would never be a teacher,” he laughs. “But when I came here, I saw in teaching something you don’t see in other work. You can communicate with your students, know how they are feeling, you know more things about life, you share ideas with them. Because of this I want to be good at teaching.”

As a refugee, Sulaiman knows the feelings of loss and hopelessness, the challenges of starting anew and letting go of old dreams. He draws from this experience, passing on his passion for learning and inspiring hope.

“I wanted to teach my students to become better, to think about these goals and the problems they have. We tell our students, forget about the problems at home, you are here to make way for your goals, you have to work.”

When asked about his plans for the future, Sulaiman says he has none. He knows firsthand just how unpredictable life can be, how plans can be derailed by elements outside anyone’s control. But he is determined to embrace the present and make the most out of every opportunity that comes his way.

“When I came to Iraq and I was painting, I worked to be good at painting. And now I am here as a teacher, I said I will be a good teacher. I work to continue my life, to never stop. So because of that I make new goals for myself.”

“The best goal, the highest goal, is to be alive. Don’t stop, don’t be upset, that is my goal,” he concludes. It is this goal he now shares with his students: resilience, adaptability, and patience.

Sulaiman has discovered new work and new passions in the face of life’s greatest challenges.