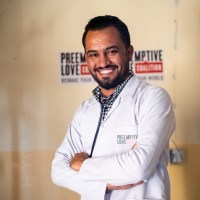 In the middle of a consultation, the power—and along with it, the lights and air conditioning on that sweltering 90+ degree day—went out. This is a reality of serving in this community on the eastern bank of the Tigris river, and in most of Iraq. Electricity, and all the modern equipment and conveniences powered by it, simply cannot be taken for granted.

Dr. Abdulqadir wasn’t fazed. He continued the rest of his examination by the daylight entering the small window of the consulting room, and used his mobile phone’s camera flash when he needed more light.

It was business as usual at the clinic.

In the second quarter of this year alone, Dr. Abdulqadir and his team have done a staggering 3977 consultations, 2026 of which are for children under 5.

Medical professionals like Dr. Abdulqadir and his team are desperately needed in devastated communities like these. The communities in this area were captured by ISIS in 2014, who wreaked destruction on the people and infrastructure.

It was one of the last places in Iraq freed from ISIS in 2017, and still, the land and its surrounds are full of uncleared bombs and mines. For residents in the area, living is difficult for many reasons, not least, the dire lack of infrastructure and essential services like healthcare.

Related: If You Think You Have a Bad Commute, Consider these Iraqi Doctors

Medical staff travel long distances to get here, including crossing a broad expanse of the mighty Tigris River in small motorboats, which can be treacherous when water levels are high and currents deadly swift.

But you heard about the 40,000 people who lived under ISIS for 3 years, suffering acutely without medical professionals, supplies, or health services. And you reached out from across the world to make it possible for committed doctors like Abdulqadir and the nurses at the clinic, to serve those who need it the most.

Our team began providing medical care in the community in October 2017, mere days after Iraqi security forces took the town back from ISIS. It wasn’t easy, as you can imagine, to provide emergency relief to an entire community traumatized by prolonged fighting and under heavy security. From the months of being a mobile emergency team to their more permanent incarnation as a clinic, our doctors and nurses never faltered in their commitment to be the first in, and last to leave.

Dr. Abdulqadir sees his patients in an area that lacks any government assistance, and his team continues to play a pivotal role in the health of thousands of patients from surrounding villages, with weekly visits to more remote villages to care for those who cannot make the journey to them.

Dr. Abdulqadir doesn’t have to make the risky journey to and from the clinic every day—he chooses to do it.

He grew up in this area, and this is his community that will go without medical care if he and his team don’t show up every day. The connection is immediate and powerful. Having the skills and medical training to serve his people, gives the difficult work that he undertakes profound, life-affirming meaning.

You make it possible for him to continue serving his people day after day.

You make sure the clinic is stocked with essential medications and supplies for those who need it the most.

You brought critical care to those on the frontlines, so they don’t have to wait the decades that experts say will be needed to fix Iraq’s health system.

You brought hope to Dr. Adulqadir’s community by bringing the doctor himself there. He is doing the lifesaving work that only medical professionals can do, because you chose to love the people no one else would love.

Help doctors heal communities torn apart by war in the way that only they can. Give today.