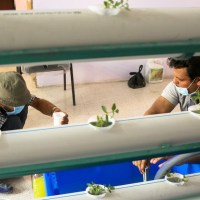 Recently, we told you about an experimental effort to help Syrian families feed themselves in the middle of their country’s civil war.

Even before we distributed food to survivors of last April’s chemical attack, our team in Syria was asking: what would it take to give families more control over their food situation, to reduce their dependence on aid? Emergency food distributions are an essential lifeline in the middle of a crisis, but they are not a long-term solution.

What if families could grow their own food instead?

Growing food in Syria was hard enough before the war began. Extreme drought was a contributing factor to the conflict that started in 2011. Since then, Syria’s food system has collapsed. The wheat harvest in 2014 was half what it was the year before. Chemical attacks could contaminate Syrian soil for years.

As a result, four out of five families in Syria now struggle to put food on the table.

What if hydroponics could make that struggle a little lighter?

So we set out on an ambitious pilot project, building a 3,000-square-foot greenhouse and installing six hydroponic systems, each one capable of growing over 200 pounds of produce—tomatoes, peppers, lettuce. Our initial goal: to reach 40 displaced families with 45 pounds of fresh vegetables per family, per harvest.

We couldn’t wait to see what would happen.

Then the heatwave struck.

Across the Middle East, temperatures have soared to record highs. This summer is on course to be one of the hottest ever recorded in this part of the world. Inside our greenhouse, the temperature hit 125 degrees F (52 C). All the seedlings died.

It’s frustrating, to say the least. It took weeks of careful work to get to this point—and now families have to wait even longer for a new source of nutritious, life-giving food.

It’s not easy sharing stories that don’t have a happy ending yet. But we don’t just want to celebrate our successes with you. We believe it’s important to also share our setbacks and failures—they’re a part of this journey too. Building the more beautiful world is difficult work, and it doesn’t always go as planned.

But there’s something you should know about our team in Syria: they don’t give up easily.

After searching other greenhouses in vain for seedlings that survived the heatwave, and after consulting local hydroponics experts, our team decided to grow new vegetables from seed. They added new fans and windows to control temperatures more effectively inside the hydroponics greenhouse, forcing hot air out and allowing cooler, fresher air to enter. Because of their quick response, the first harvest is expected to be delayed by only a few weeks.

Growing food in Syria is still hard—because of conflict and climate. But we’re serious about putting families in control of their own food situation… and giving parents what they need to feed their own children.

Stay tuned for more updates from our pilot hydroponics project in Syria.