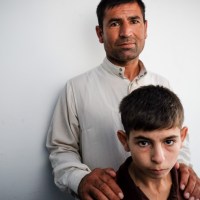 This is Yasser with his son, Hatem, and they were there when ISIS first attacked.

Yasser and other residents of his town did their best to resist, but the militants were too strong.

“We did well for a week, and they couldn’t pass our line. But they had better weapons and more experience. We were outmatched.”

Yasser and his family are Turkmen, a minority in Iraq. As if that didn’t put enough of a target on their backs, they are also Shia, perhaps the most brutalized religious minority in Northern Iraq.

“We were defending our homes, but they broke our line and we had to flee.”

Yasser paused and looked down at the floor.

“If your car broke down, you were dead. We tried not to look back. It was too terrible.”

Yasser and Hatem escaped south to Baghdad, where they now live with other displaced families in a crowded school. We are helping these families with basic necessities like food, clothing and shelter, but Hatem needs a heart operation if he’s going to live into adulthood.

He should have gotten this heart surgery when he was four years old, but doctors here say he still he still has a window of time.

If you’ve wanted to serve families persecuted by ISIS but haven’t known how, this is your chance. Families across the country are looking to our doctors in southern Iraq for lifesaving surgery, and your donation helps the lifesaving surgeries continue.

By saying ‘yes’ to Hatem, you give families hope in the midst of overwhelming despair.

By saying ‘yes’ to these children, you are saying ‘no’ to ISIS and to hatred.

By becoming a monthly sponsor, you make sure our partners and staff on the ground are always able to provide persecuted children like Hatem with the lifesaving heart surgery they need!