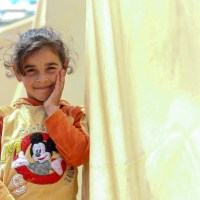 The battle for the city of Raqqa—the ISIS capital in Syria—rages on. Peace talks have seen limited success, including a narrow ceasefire agreement in parts of the country—but the Syrian people have seen many ceasefires come and go.

You, however, remain steady in your outpouring of love and help in Syria.

Here are highlights from last month…

Generators for Homes Without Electricity

Life is difficult without electricity. It is especially hard if you live in Aleppo and are struggling to rebuild your home and get back to work with no city power.

Six years of war in Syria have left Aleppo with no power plants or electric lines, and now summer temperatures are close to 100 degrees each day.

You have seen this need and responded.

A new project is underway to provide large generators to four neighborhoods in eastern Aleppo so that 120 homes will have power. The cost of installation, maintenance, and operation will be covered for the rest of the year.

This source of power will bring a marked improvement to the lives of these families and will make all the other parts of their lives run more smoothly.

Good and Bad News With Our Hydroponics Project

Last month we reported on a trial project in Syria—growing tomatoes and other vegetables in a hydroponic greenhouse. We are hoping that produce can be grown on a large enough scale to provide people across the region with fresh vegetables. This could be a long-term food source for families and also provide jobs and income for the growers.

Hydroponics is a way of growing plants without soil, using sand, gravel, or liquid, along with added nutrients. This allows vegetables to be raised in a controlled environment with less chance of disease, faster growth, and greater fruit yield. It’s also a vital alternative in areas where the soil has been contaminated by pollutants or chemical weapons.

The good news is that construction of our first 3,000 square-foot green house is complete.

Workers cleared the land, built the metal framework, and constructed a network of PVC pipes.

Next, the pipes were installed, a water circulation system put in place, and the greenhouse enclosed in plastic.

Solar panels were erected to provide power to the circulation pumps.

Finally, the delicate work of moving the seedlings from their original containers into the pipe system was completed.

Unfortunately, the first crop of seedlings withered in the heatwave that struck Syria recently. This was a difficult but valuable lesson. Our team is making adjustments to the greenhouse and cultivating the next set of plants to be grown. Because of their quick response, we are only a few weeks behind schedule. Read more about our hydroponics project here.

Over the last three months, you’ve brought relief to families affected by the chemical attack in northern Syria in early April.

Our team is currently following up with affected families.

Thank you for continuing to stand with the people of Syria. By meeting needs now and building for the future, you send the clear message that they are loved and that they are not forgotten.

Keep showing up for families in Syria.

Remind them that they are not forgotten.