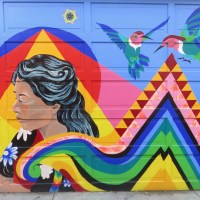 According to the 2020 US census, approximately one in five US citizens identify as Latino or Hispanic. Latino and Hispanic Americans have enriched US culture, shaped US history, and propelled US achievements. In celebration of National Hispanic Heritage Month, we recognize their contributions to making the United States a richer, more diverse place.

Since identity underpins the way we show up in the world, terms such as Latino/a, Latinx, Hispanic, or Chicano/a carry weight. Not only do they consider a person’s history and cultural background, but these labels also coalesce the tangible and intangible of heritage. They contain the ideas, memories, songs, recipes, languages, and dances of who we are and how we see ourselves. These labels also expand outward, revealing the historical moments when a particular term came into use.

Identities such as Latino/a, Hispanic, and Chicano/a are local and distinct, yet global and shared. They are rooted in shared cultures, not racial categories. What exactly do they mean?

The Difference between Hispanic and Latino/a

In 1976, the US Congress passed Public Law 94-311, which defined Hispanic as people who identify themselves as being from a Spanish-speaking background or whose ancestry traces back to Mexico, Puerto Rico, Cuba, Central and South America, and other Spanish-speaking countries. According to this law, people from Portugal and Brazil are not Hispanic. Under this law, the term Hispanic is rooted in language.

Being Latino (male) or Latina (female) is a term rooted in geography, perhaps due to colonization. The term describes people who are from any country south of the United States or people who descend from any country south of the US, including the Caribbean. Interestingly, Latin America is the first region where the US established its overseas colonies, the beginning of the US empire.

According to these definitions, a person from Brazil is Latino/a but not Hispanic. A person from Spain is Hispanic but not Latino/a. A person from Colombia is both. It is not recommended to call a Hispanic person Spanish because it lumps diverse groups of people under one category.

The term Latinx addresses the gender binary by providing a more inclusive, gender-neutral term. The Spanish language has masculine endings (o) and feminine endings (a) for its adjectives and modifiers whereas the English language is gender neutral. For example, if a person is clever, in English we say “a clever girl, a clever boy.” The indefinite article and the adjective do not change. In Spanish, we say “un niño listo” for a smart boy but “una niña lista” for a smart girl. The indefinite article and the adjective have masculine and feminine forms in Spanish.

What about Ethnic Identity?

How a person identifies themself varies across immigrant generations. For example, a person from Latin America who resettles in the US usually identifies themself by their country of origin, so a newly arrived immigrant from Honduras would probably call themself Honduran. Likewise, Indigenous people from Latin America refer to themselves by their Native heritage. US-born and raised children and grandchildren from Latin America have different views and may refer to themselves as Latino/a/x or Hispanic. If these identities feel too broad, they, too, may identify themselves by their country of origin and as American. In the end, ethnic identity is a social construct, so a person is what they say they are, and they are not what they say they aren’t.

Who is a Chicano/a?

A Chicano (male) or a Chicana (female) is a native of Mexico living in the US or someone who is of Mexican descent and lives in the US. This term became popular during the Chicano movement of the 1960s to express pride in Mexican culture and ethnicity.

Latin America is at the intersection of Native people, European colonization, African slavery, and global immigration. The Latino/a/x identity includes a variety of races, which share the same cultural practices, language, and history. Sofia Vergara, Colombian star of the TV show Modern Family, and Zoe Saldana, Puerto Ricana-Dominican star of the film Avatar, are both Latina–if they say they are–despite having different skin colors.

Race is a social construct that has been used to justify slavery, not a biological classification. A race chromosome does not exist. How Mexicans have been classified in the US context is an example of why race is not biologically real. In 1929, Mexicans were classified as white, but in 1930, they were classified as non-white to limit immigration. In 1942, when the US needed to increase its labor force, Mexicans were considered white again to increase immigration.

Together, Latinos, Latinas, Latinx, Hispanics, Chicanos, and Chicanas comprise the largest minority community in the United States. Their stories thread with all those who reside in the US, forming the fabric of our shared society. When we treat each other with respect and dignity, our interwoven strands strengthen, forming a rich cultural tapestry enveloping everyone.