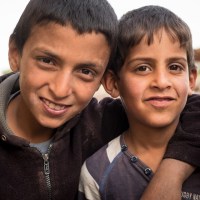 For over six years now, children and families have been caught in the crossfire of the deadly Syrian conflict. Some are fleeing violence and are on the move inside the country. Others are returning home to repair and rebuild. None are living the peaceful, stable life they long for.

You have not stopped hearing their stories and seeing their faces, even as the world has largely turned its attention away from Syria in recent months. You are meeting people’s needs for food, shelter, and medicine in a variety of ways.

Here are some highlights from your investment in Syria over the last month:

Many families need access to medical care for emergencies such as war wounds, and foot and skin ailments, which are common among displaced families— as well as routine conditions including pregnancy, asthma, and diabetes. To meet these needs, our team in Syria recently helped purchased five ambulances and five mobile clinics to be used among displaced populations in the Aleppo countryside. These vehicles travel where most needed and bring great relief to those they serve.

As fighting dies down in eastern Aleppo, families make the trek home to learn whether there’s an intact house waiting for them or only rubble. How can you feel safe or settled when you find smashed windows, broken doors, and holes in the walls? For several months now, you have been responding to this critical need.

First, you provided an assessment team to inspect homes and catalog the repairs needed to walls, windows, doors, kitchens, and bathrooms. The goal is to make at least one room livable in each house, so that families can have shelter while they undertake the longer work of rebuilding the rest of the house.

Next, local builders are selected and attend training to ensure they follow appropriate building standards. A host of permissions and approvals are then received, and finally supplies are purchased and repairs begin.

To date, 51 damaged homes in eastern Aleppo have been assessed, and 15 are currently being repaired. All the work should be finished in the next three months.

This work has seen many delays, including road closures due to security concerns, changes in permission requirements, and administrative delays on building permits. But our team presses on in the vital work of giving families a safe place to live.

Life is difficult without electricity. It is especially hard if you live in Aleppo and you’re struggling to rebuild your home and get back to work with no city power.

Six years of war in Syria have left Aleppo with no power plants or electric lines, and now summer temperatures are close to 100 degrees each day.

You have seen this need, and you’re responding.

Along with home repairs, last month your generosity provided large generators to four neighborhoods in eastern Aleppo. The same 51 homes that are being repaired, plus 69 more, will have power as a result. Think of what this means: 120 families can refrigerate their food, have lights after dark, and experience relief from the heat. Your generosity covered the cost of installation and maintenance, and we subsidize the cost of operation so that families only have to pay a small monthly amount.

This source of power will bring a marked improvement to the quality of life of these families and will make all the other parts of their lives run more smoothly, too.

Our team in Syria has been testing a new idea this summer—growing tomatoes and other vegetables in a hydroponic greenhouse. We are hoping that produce can be grown on a large enough scale to provide people across the region with fresh vegetables. This could be a long-term food source for families and also provide jobs and income for the growers.

Hydroponics is a way of growing plants without soil, using sand, gravel, or liquid, along with added nutrients. This allows vegetables to be raised in a controlled environment with less chance of disease, faster growth, and greater fruit yield. It’s also a vital alternative in areas where the soil has been contaminated by pollutants or chemical weapons.

This pilot project has two parts. The first is to build a 3,000 sq. ft. greenhouses in refugee camps. They would house six separate hydroponics systems and serve 30 families. Despite early setbacks, including a brutal heat wave that withered plants and seedlings, the first greenhouse has been built and is growing tomatoes right now.

The second part of the project is to pilot a home-based hydroponics system, where individual families can tend their crop and have enough to eat and to sell.

In each case, participating families would receive close to 45 pounds of produce, which is enough to feed the family and have surplus to sell.

Once the pilot programs are a success, an initial set of participants will be selected. We especially want to benefit female-headed households, displaced families, individuals with disabilities, and families who have an interest or background in agriculture.

We hope this idea will grow and expand into a meaningful source of food and jobs in Syria.

Thank you for continuing to remember families in Syria and for supporting them with your monthly contributions.

Keep showing up for families in Aleppo. Their journey to rebuild has just begun.