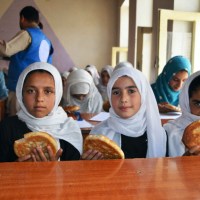 The teachers cheered! When they met our team member in Afghanistan and learned that our community is the reason why the 800 children at their school are receiving breakfast, they cheered. That was a great sign this program is working.

When designing programming to meet the needs of vulnerable families in communities impacted by conflict and violence, we always look at both the acute short-term needs, as well as long-term implications. That’s certainly true of our breakfast program for school children in Afghanistan.

A Nutritious Start to the Day

In response to our friends in Afghanistan desperate to maintain a decent education for their daughters and sons while living under the rule of the Taliban, the objective of the program is to improve school enrolment and attendance for girls and boys, especially those who are food insecure. It’s difficult to attend school consistently when you’re hungry. It’s even harder to learn and remember new skills when your brain doesn’t have the fuel it needs to function at its best.

For a 6-month pilot project, we are providing breakfast every school day (Saturday through Thursday) in the form of nutritious breakfast biscuits, to a school located in an impoverished neighborhood. While they look like simple cookies, these biscuits are made with ingredients like fortified flour, milk, eggs, walnuts or raisins, and black seeds. The kids love them, and their large size fills bellies.

Starvation on the Rise

Decades of war have made life impossible for many families across the country, but with the most recent rise to power of the Taliban more than a year ago and the retreat of US forces, foreign aid which was keeping the country afloat was frozen. No western government wants to be seen as supporting a group designated a “Specially Designated Global Terrorist Entity” by the US government in 2002. No western government wants to get tangled in the economic sanctions imposed on the country since 1999. The Taliban isn’t recognized as the legitimate government of Afghanistan, which would trigger the release of more than $7 billion in Afghan federal reserves held in the Federal Reserve Bank of New York.

One of the consequences of the long list of designations and sanctions is the growing desperation of regular families living in Afghanistan. In this environment, business investment is non-existent, so there is little work available. Many families rely on loans to keep their families from starving, and when the debtors demand that loans be repaid—the vulnerable have to make the most impossible of choices. Some sell a kidney to buy a little time. Some drug their children who cry from hunger, because the medicine is cheaper than food. Some have become so desperate they have sold their children. Impossible choices to make, sacrificing one child so a whole family doesn’t starve to death.

In the short term, keeping children in school could seem like a luxury.

Long-lasting Implications of this Simple Intervention

Keeping children in school, and ensuring they have the nutrition they need to learn, accomplishes so much for today and the future. Evidence demonstrates that school feeding programs help protect children from child labor, begging in the streets, and child marriages (especially for girls). School feeding programs improve children’s cognitive capacity and learning outcomes, which has a direct impact on the opportunities they can access for the rest of their lives.

Working with local bakers who source ingredients from local businesses supports the local economy. Keeping kids in school and nourished is good for the community.

This is the kind of change we can make together—simple, high-impact programs that change the story from hopelessness to hope. Give now to give girls and boys in Afghanistan a brighter future.