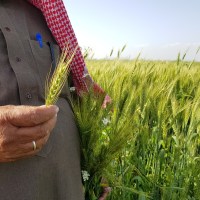 Have you ever wondered how the war in Syria started?

It’s raged for so long now, it can be hard to remember how it began or what life was like before.

But Syria’s war began, in part, because of a drought.

A once-in-a-thousand-years kind of drought.

A drought so bad, 3 out of 4 farms in Syria collapsed.

Before this drought, there were more farmers in Syria than all of America. The loss of their land and their livelihood set the stage for one of the worst wars in modern history.

Millions of farmers poured into Syria’s already overcrowded cities, hoping to find a new way to provide for their families. But opportunity was in short supply even before they arrived. Resources were stretched thin, tempers stretched even thinner.

And so the fuse was lit.

It’s been eight years. The drought is over, but the war is not. Many farmers have yet to go home—either because they have none left to go back to, or because it’s still not safe, or because their fields are now littered with the debris of war: landmines and other unexploded ordnances.

If the collapse of Syria’s farms led to war, then the renewing these farms could stop the next war from ever happening.

They can’t go forward. They can’t go back. They’re trapped in the very conditions that led to war in the first place. Which makes the next war all but inevitable.

By creating jobs for Syrian families—especially those who were hardest hit by drought and war—we can make the next war less likely.

But these families cannot do it alone.

They already have the know-how, the expertise, a deep knowledge of the land and what kind of crops grow well here. But they need a partner who can help them return—and remake home.

They need seeds and tools to till the earth again. They need access to more sustainable methods of farming, so their crops can withstand an ever-changing climate.

They need connection with other farmers—because one farmer standing alone is still vulnerable. But a whole co-op of farming families working together, supporting each other? They stand a much better chance of thriving together.

They need livestock to tend—pregnant sheep will quickly multiply into a whole flock, providing nutritious milk to drink or make into yogurt and cheese. It’s food and income for these families. The building blocks of a sustainable life.

Farming is livelihood and nourishment. It’s identity and purpose. When we help farmers return home, the whole economy grows. It becomes more resilient. Mothers and fathers step out of vulnerability and reclaim their identities as farmers, as providers.

And a war that began with a drought will end with a harvest.

But it will take all of us, investing in hundreds of families as they return to their farms and till the earth again. To remake home. To end war.

Will you join us today?

Create jobs that will feed families for years to come—and help stop the next war from ever happening.