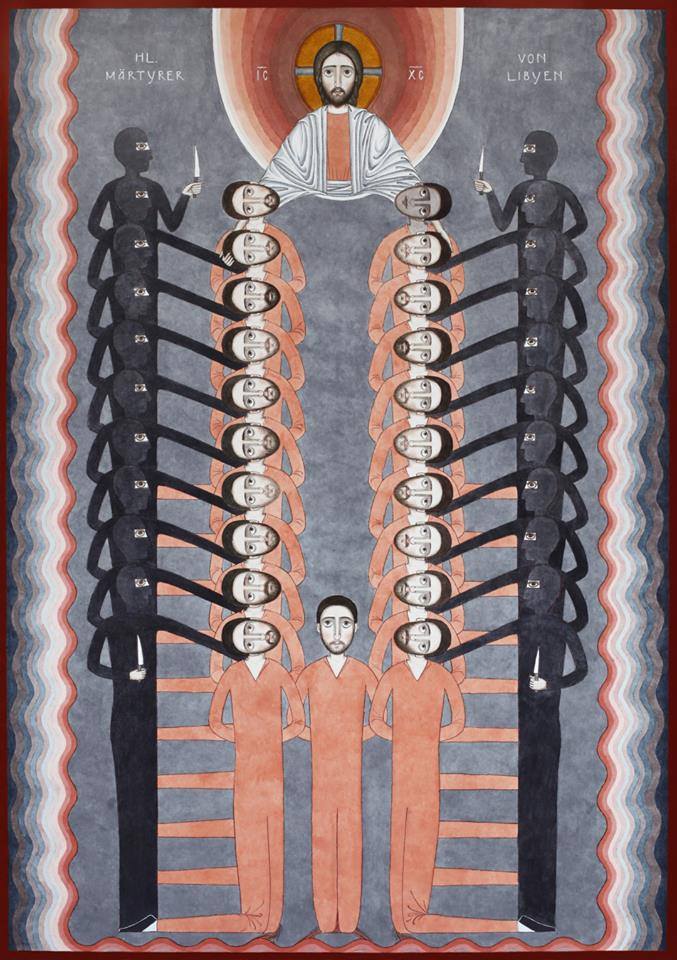 We each have our own way of processing the tragedy flashing across our screens. Some are transfixed by the horror. Some change the channel. When Nikola Sarić, a Serbian-born artist living in Germany, saw 20 Egyptian migrant workers in Libya and a Ghanian companion killed on a beach in Libya in February, he reached for his brushes and paint.

In his work “21 Libyan Martyrs, 2015”, we see the same orange jumpsuits and black ISIS uniforms from news websites. We see the knives and the blood running into the Mediterranean surf. But we also see the events from the captives’ Christian Coptic perspective—the spiritual events which don’t transmit in a news broadcast.

“It all started with seeing media reports about [the martyrs], which struck me immediately. Out of that grief, something creative came up. I was thinking about them, empathy and love towards them grew, and that became a corner stone of the project” Sarić told us recently by email.

“I think that in any tragedy there is no sense in it, but I also think that we can overcome a tragedy and see beyond the harsh reality, with another perspective or with spiritual eyes, as I would like to say. That is what I try to do in my work and in my life.”

When Sarić looked at those men on the beach facing execution because they chose to hold to their faith, he saw the unseen. “In their minds they were with God. They prayed. Faith changed their captivity into freedom, death into life.”

News footage captured the terrible death of these 21 men. Sarić brings the viewer a different point of view: “their point of view—a reality which is unimaginable but existing.” Christ is seen reaching down to comfort, even as ISIS soldiers grab each man by the hair. Every prisoner but one looks to heaven. The last prisoner looks us squarely in the eye.

Iconography, the tradition of this painting style, is an ancient religious art practiced to remember and honour those who came before—those who died for their faith. In Sarić’s hands, iconography becomes a tangible bridge between those martyred a thousand years ago to those who die today. He breaks some of the traditional “rules” to create images which feel both ancient and contemporary.

“Art plays a significant role, not just in religious practice, but represents a time document about persons, events and ideas that had and will continue to have impact on people.”

He reminds us that art doesn’t have to be something trapped behind museum walls, something removed from our daily lives. Art can help us process what we see and feel daily; help us to gain a little perspective, to grieve.

Sarić’s artistic expression takes many forms, from chic tile installations and wallpaper designs to paintings and traditionally inspired icons, but it is his ability to see the essence of an event–to distill and infuse emotion in lines–which makes his modern icons so contemporary and important.