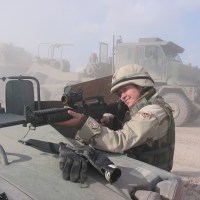 I flew into the ink black desert night with my gas mask on and a weapon strapped to my side. I was tasked to distribute atropine antidote syringes to my company of soldiers the minute we tumbled out into the desert air in case we were gassed. We never knew how long we would be deployed there, we were never told when we would be able to go home. 397 nights I slept in an Iraqi desert tent with a 9 mm berretta lying next to me before I boarded a C130 cargo plane to return home.

Just a few months before, I walked across the stage at my college graduation. And then I got a phone call telling me to “put my affairs in order”.  Three months before I was finished with my commitment to the Army National guard, which paid for my college education, I was called up to active duty in Iraq. I was a recent college graduate who was being called up with a group of college students, middle-aged shoe salesmen and pizza delivery guys, in a unit that hadn’t been called up in 30 years.

I watched bombs dropped on Baghdad, on the nightly news and heard the rumors and debates of weapons of mass destruction and Saddam’s chemical warfare attacks. I couldn’t wrap my head around the fact that I’d be flying into that. 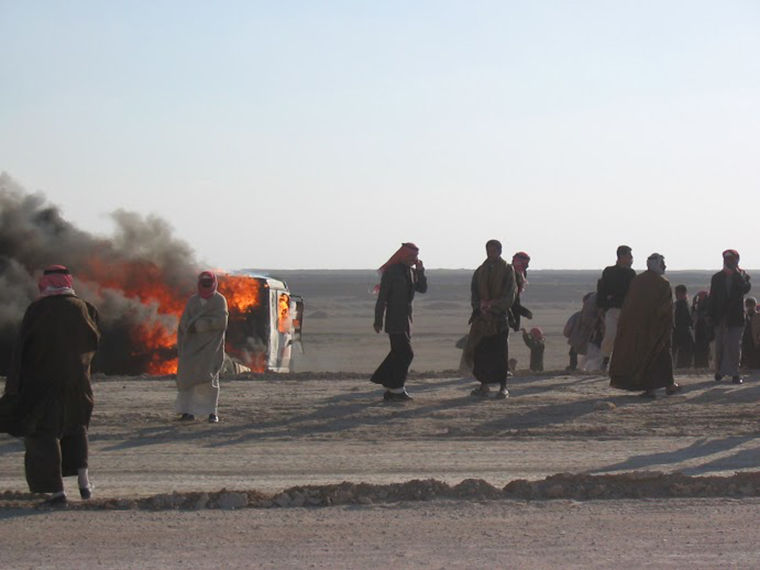 Some say that when you go through something hard or traumatic you are afforded an opportunity to find out who you really are.  I believe I met myself for the first time during those 397 days.

I grew up with a pretty black and white worldview. There was always a right and always a wrong, us versus them, good guys and bad guys. Most importantly, God was always on our side.  Good guys could do anything they wanted to the bad guys. The ends justified the means, even if that meant taking a life.

I really never gave much thought to war, I accepted it all and like my culture, looked up to anyone wearing a uniform. Looking back, I think I dodged the reality of what I believed about killing people as a soldier because I carried a tidy little excuse on my back called a Medic Bag. I told myself and others that my job as a combat medic was to help people, not hurt them. I ignored the reality of what I carried on my right hip.

The night it all came blasting apart was one month in, during an evening meeting in an impossibly hot and dusty tent in the desert. We were getting briefed on our convoy to Baghdad the next day. Here’s how it went as I wrote it later in my journal.

“May 31st.  The dust was stinging my eyes, while I struggled to hear what the Commander was saying over the wail of the wind beating down on the desert tent.  I was twenty-three years old, preparing to convoy across the desert into a war zone when the idea of taking a life became a life and death reality to me.  The briefing was informing our company of our duty to keep the convoy rolling at all cost tomorrow.  He related an enemy tactic of pushing little children in front of the convoy to stop the truck, which would leave the convoy vulnerable to attack.  I was grasping at his words over the din of soldiers whispering next to me, and the drum of the sandstorm beating down.  “If you brake the convoy in order to avoid harming a child, you will be responsible for your fellow soldiers in the last trucks getting attacked, I hope you understand your duty. If anybody isn’t able to do their duty and protect their battle buddies, stand up now and identify yourself”.  His words hung in the air, suspended by dread for me.” 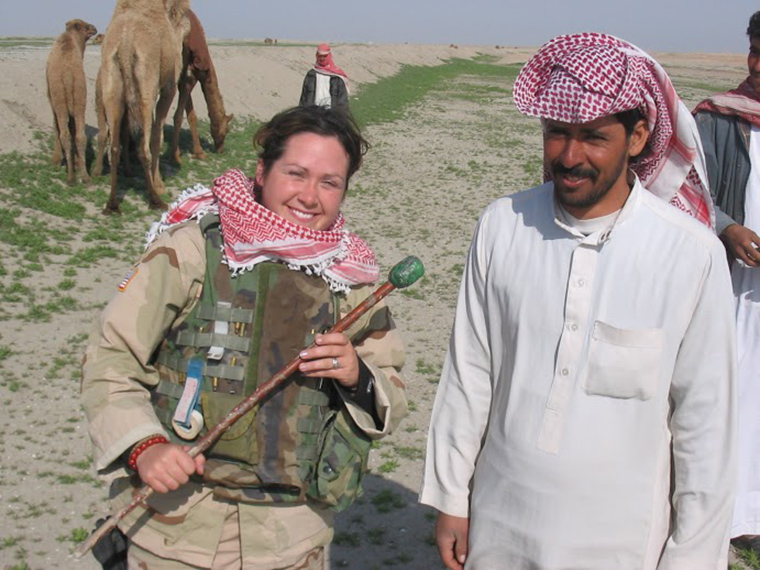 I knew that despite the direct order from my Commander and the medals that would be pinned to my chest, something was pushing back—and it wasn’t letting up. Something seared across my soul and wouldn’t let me value my life or an American soldier’s life above an Iraqi child’s.  I was breaking apart on the inside. If I stood up and said I wasn’t going to follow this order to run over a child …I would be betraying the uniform I wore and branded a traitor. I kept envisioning myself telling Jesus, “I had to, I had to take a life to save a life”. The hollowness of those words echoed inside my soul.

All the military discipline that had been beaten into me couldn’t quiet the voice screaming in my soul.  Soldiers put their lives in each others hands—its part of what I signed up for.  But everything in me was shrieking that I couldn’t run over and kill an Iraqi child to save my fellow soldiers life, or to keep our convoy safe from being ambushed. I found myself  all alone in no man’s land.  And the convoy was happening in a few short hours.

The voice never quieted down. I continued to feel tension build up inside as the things I was told to do, the “right” things just weren’t adding up anymore. The war raged on into the next day and the next week and by 6 months into it I had seen so much human suffering at the hands of “good guys” that something broke inside me.  Fellow soldiers were raping their female battle buddies in broad daylight with no consequence, while other soldiers I knew were torturing people at  Abu Ghraib prison. So many things I had grown up believing to be “good” were being revealed as nothing more than disguised hate. 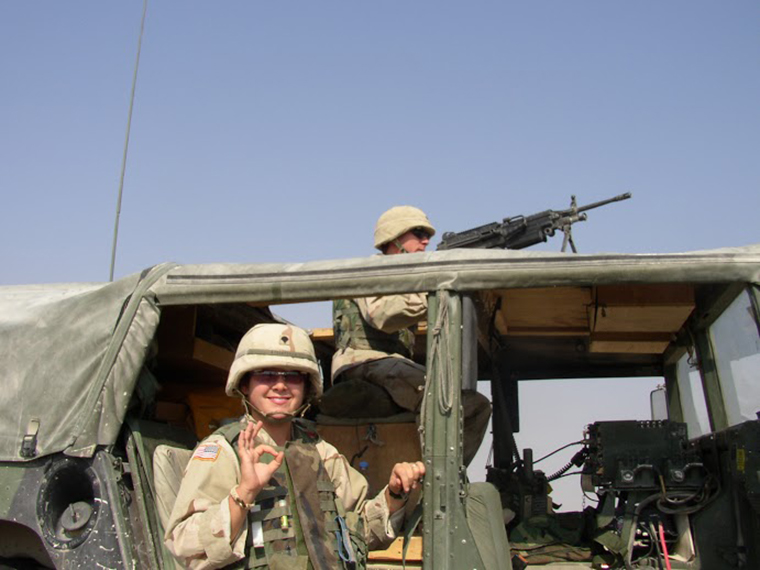 I was done dodging death. I couldn’t find the good guys anymore anywhere. Death no longer seemed like it was the worst thing that could happen to me. It wasn’t that I wanted to die….I just couldn’t witness any more of it. I caught myself whispering, “I’ve seen enough, Jesus, take me home.”

The low point came around Christmas time when I stopped putting my bullet proof plates into my flak jacket. My soul was so weary that I just wasn’t trying so hard anymore to protect my life. I was betrayed in the worst way…and I am still not same.

At the same time, I was befriended by Iraqi mothers and fathers who other soldiers treated like dogs and ignored. No one seemed to care that their children needed clean water and were hungry. After sitting on the floor of their homes, and looking at their family photo albums with fancy wedding pictures…I was struck by how their lives were destroyed by Saddam’s regime, and that their dignity was just as trampled by the American occupation. This context where the story of my surrender begins.

I can live with the nightmares that I have from the war, but I couldn’t live with what I would have carried had I kept loading my weapon everyday. The weight of taking a life, would have been too much take.

The war unmade me. 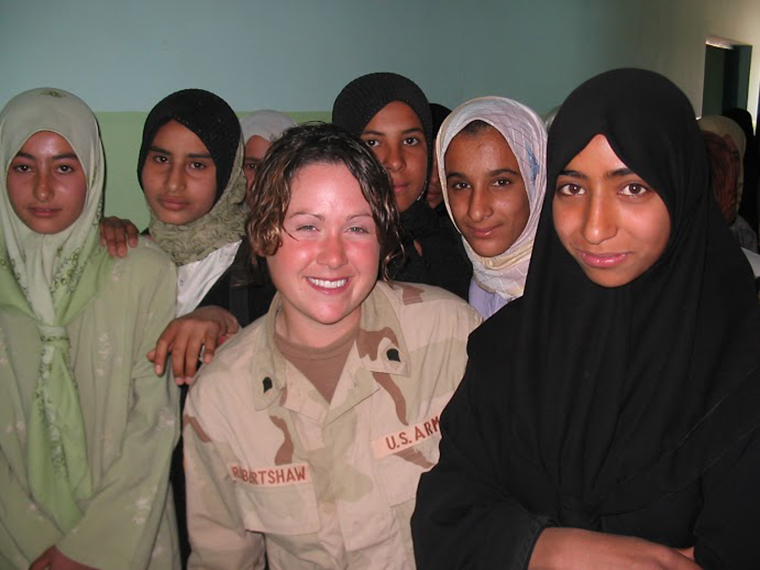 After I was introduced to this idea of ‘preemptive love,’ news headlines of violence didn’t batter my heart the same way anymore. I could see that the news story wasn’t the end of the story anymore. I was starting to see past the headlines and reimagine what could happen next in that story. I was caught up in this new way of seeing people I didn’t agree with, tragedies, the wider world. This was how I wanted to start living.

I saw this posture changing how I saw Charleston, Ferguson, political posturing, and the Iran deal. If preemptive love could choose to reach out to Iraqis and build a new story, then maybe–just maybe–the divisions and violence in my own country could have a new story.

In all my reading and wrestling I had never hear anything like this. The idea that we can confront violence and not just sigh and turn the page. The dam of tension inside my soul broke…this was the same truth that had seared my soul in the desert tent so many years ago. This was the new posture, the courageous lens that reimagined what could be instead of only grieving for what had happened. 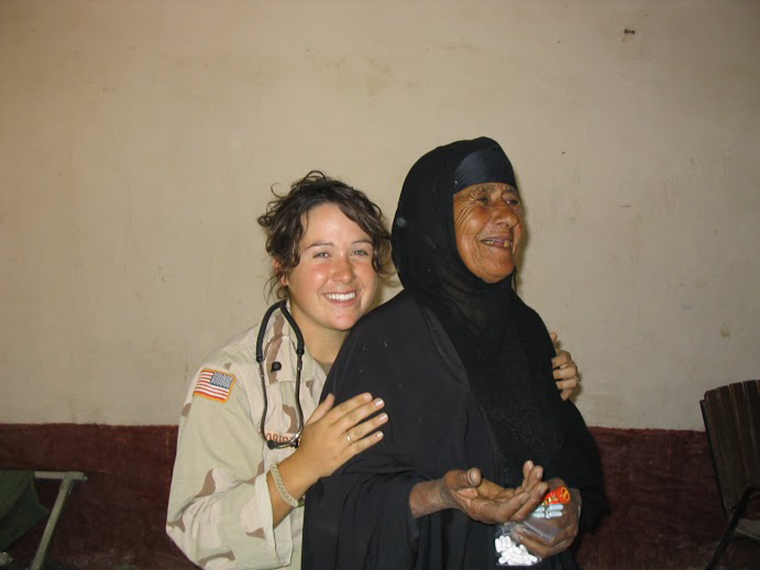 Preemptive love was healing hearts across enemy lines, and mine was the first in line.

Unmaking violence and remaking our world ignited me, and released me from hopelessness. I was reengaged to choose love first and reimagine new endings to my story.

I can’t undo violent conflict, nuclear arms, or the fact that we declared war on Iraq twice. I can’t change that hundreds of thousands of Iraqi civilians have died due to war related causes… But I can love the people that those decisions hurt or marginalized.

I don’t lean left or right. I lean in. I lean forward, because that’s where love lives.

*This post is an excerpt of a presentation delivered at Samford University, on October 1, 2015.  The full essay can be read here.