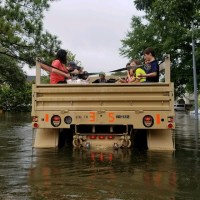 Hurricane Harvey barrelled through Texas over the weekend and camped out over the Houston area, causing massive devastation. Tens of thousands are fleeing. Thousands more are trapped, their homes and cars underwater. The violence of this storm is unmaking lives, as sure as bullets and bombs do so in places like Iraq and Syria.

A big part of my heart is wrapped up in Houston. If there is one city in America that I call home, it’s Houston. When my family and I come back from Iraq, this is where we go. My wife’s family lives there. We have staff within driving distance of the storm.

But more than that, you know that no matter the cause, no matter the place, preemptive love has the power to remake the world. We won’t just send our thoughts and prayers to the people of Texas—we are putting our hearts and our resources on the line, as we’ve done so many times in Syria and Iraq. Because the frontlines aren’t just “over there.” The frontlines are where we live.

We are showing up for families affected by Hurricane Harvey, and we need you to go with us. Our team is on its way right now.

Responding to critical need in the midst of crisis is what you do—identifying the least-served populations, showing up in the hardest to reach areas, and building peace and reconciliation every step of the way.

We are responding, using everything we’ve learned over the last 10 years of showing up in crisis and integrating the values that you hold so dear. 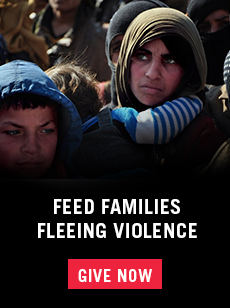 We are focusing on those who can’t evacuate because of poverty or a lack of transportation or both. We’re prioritizing smaller towns outside Houston that are being hammered by the storm, but don’t have the resources to cope and won’t be seen on the news. We’re doing what we always do: going to some of the least reached, most underserved people.

We’re supporting areas seeing an influx of displaced people, because we know firsthand how difficult it can be for a community to unexpectedly receive thousands of people who have no place to live, no work, and no resources to get by. We’re bringing together a coalition of churches, mosques, synagogues, and local experts to work together shoulder-to-shoulder, just like we’ve done in Iraq and Syria.

When families flee—whether it’s the violence of conflict or the violence of a hurricane, whether it’s Aleppo or Houston—they need someone to show up for them with shelter, food, water, medicine, friendship, and preemptive love. And that’s where you shine.

We’ve been saying it for years: the frontlines are where we live. It’s always been true, but this weekend, the frontlines arrived in an unmistakable way. We hoped it would never be necessary to use our emergency relief expertise in the U.S., but the need has arrived. We know that you want to show up.

With every frontline crisis, you have shown up. This is no different. We must stand together for our friends in Houston.

Give now, whatever you can, as we respond to the devastation of Hurricane Harvey.