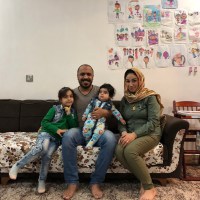 The day I left the Iraq War was the best day of my life. Boarding the C-130 cargo plane headed home after a year in a war zone felt like a miracle. I never imagined I would choose to return to Iraq.

But now 15 years later I’m back in this country, in the place that rearranged the way I saw the world and who I thought was my enemy. Here, in the midst of war, I began my peace story.

I’m sitting at a table in my Iraqi teammate’s home. When I started as a peacemaker with Preemptive Love Coalition, I found an unlikely friendship with Ihsan. We both lived through the invasion of 2003 in the same part of Iraq. We traveled the same roads, stopped at the same checkpoints, and drove through the same village squares. We share an experience together that few people do, while acknowledging it was different for each of us—a soldier versus civilian.

Ihsan is an Iraqi who is waging peace for his country. He is crossing the lines drawn in the sand of Sunni and Shia, American and Iraqi, Christian and Muslim, worthy and disposable. He chooses everyone, no matter what line had been drawn around them. He has more courage, more compassion, and more hope for the future than anyone I know. And he’s chosen to be my friend, even while he’s seen the violence done by those wearing the uniform I did. He’s made a place for me at his family’s table and invited me in.

War changed both of our lives. Ihsan was 17-years-old when the US Army moved into his province. I was stationed a few villages away from his hometown.

The war is over, but Ihsan and my stories are woven together. We are not done unmaking the violence in Iraq.  I never imagined, after leaving Iraq on that C-130 that I would be welcomed into an Iraqi home as a friend.

I’ll never be able to wrap my arms around the way this heals me. The people of Iraq—who chose to see me as a person first and my uniform second—they are ones who first showed me preemptive love. They welcomed me to their family, they fed me and listened to me. They chose friendship instead of fear, risk instead of safety. They didn’t see it as “us against them.” Their love has changed me.

This is the kind of love that has the power to transform enemies into friends and to create new stories between people at odds. Ihsan is healing his country by crossing the divides. He’s chosen to go to hot-zones in Fallujah and Haditha. “People said those people are ISIS sympathizers, all of them. But when I went and met the people; they were scared. They were being abused by ISIS and had no way to escape. They were not bad people, they are Iraqi people.” Ihsan has a wife and two children at home, and he chooses to go where most would not dare because he believes in remaking a better world.

Fifteen years post-war, I’m sitting in Ihsan’s home, around a table piled high with dish after dish his wife has made. We hand his baby son back and forth and play Candyland with his young daughter. We share stories from living through wartime, and parenting tricks for getting fussy babies to sleep through the night. It’s a future I never thought was possible, I never thought to dream.

This is the way of peacemaking that Ihsan has taught me: where there is no enemy, no dividing lines. There is space at the table, room for all. We are all welcome.