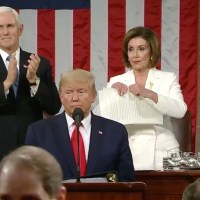 Tearing up President Trump’s speech may have been the most honest thing Speaker Pelosi could have done.

Refusing to shake Pelosi’s hand, if it was an intentional snub, may have been the most honest thing Trump could have done.

We are finally able to see ourselves as we are.

For years, the State of the Union and other moments of political pomp and ceremony projected at least the illusion of civility, a carefully choreographed image of a country rising above partisanship for the sake of common cause—or at least common courtesy.

There were occasional cracks in the edifice, like the time a congressman shouted “You lie!” during a speech by then-President Obama. But for the most part, the illusion held. Decorum was maintained, the edifice preserved.

During last night’s State of the Union, there was no such illusion. The customary pretense of civility gave way to what was, if nothing else, a more honest reflection back to us—of who we are, and how deeply divided we are.

We’re not going to offer any hot takes on whether ripping the speech was a bold act of political defiance or a petty display of partisanship. Both perspectives are held by members of our team and our wider community. We are not unlike the divided nation many of us belong to.

What last night’s State of the Union made painfully clear is that we can’t escape or ignore our current situation.

Yes, we really are this divided. Yes, 2020 really is going to be as polarizing as many of us fear.

So what are we going to do about it?

2020 is going to be a year of division and polarization. Will this also be the year we start writing a counter-story?

We can hunker down in our echo chambers, listen only to those who agree with us, cheer as the pundit class and the twitterati tear each other apart—not realizing that by isolating ourselves from and dehumanizing those we disagree with, we are slowly corroding our own hearts. 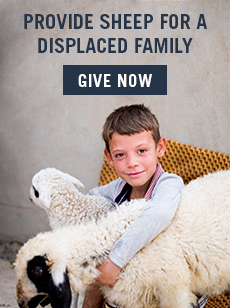 We can check out, turn off CNN or Fox News and binge-watch Netflix instead—and sometimes we should unplug! But escapism is not a long-term strategy for healing what’s tearing us apart.

We can stay silent, refuse to engage, declare that politics really isn’t our thing—hoping that somehow, this time, neutrality will be the answer it’s never managed to be to the most pressing issues of our day.

Or we can show up.

We can seek out those who see the world differently than we do. Not to pretend our differences don’t exist or don’t matter, but to pursue understanding and relationship anyway.

We can choose to relentlessly humanize everyone. Hold space for everyone. We can refuse to let exclusionary partisanship or superficial civility be our only options.

We can choose something better, something that might just offer a way through.

2020 is going to be a year of division and polarization. The question is: will this also be the year we start writing a counter-story?

There will be plenty of opportunities to divide in 2020. But there is also a way to draw closer to each other in the year ahead: we can gather. In our neighborhoods. With THAT person.

Not to pretend everything is fine. And not to symbolically tear each other apart. But to listen to each other. Learn from each other. And pursue peace through relationship and action.

Now that the illusion is gone, now that our divisions are laid bare, the real work of peacemaking can begin. But it won’t start until you do.

This year, take the first step to healing all that’s tearing us apart. 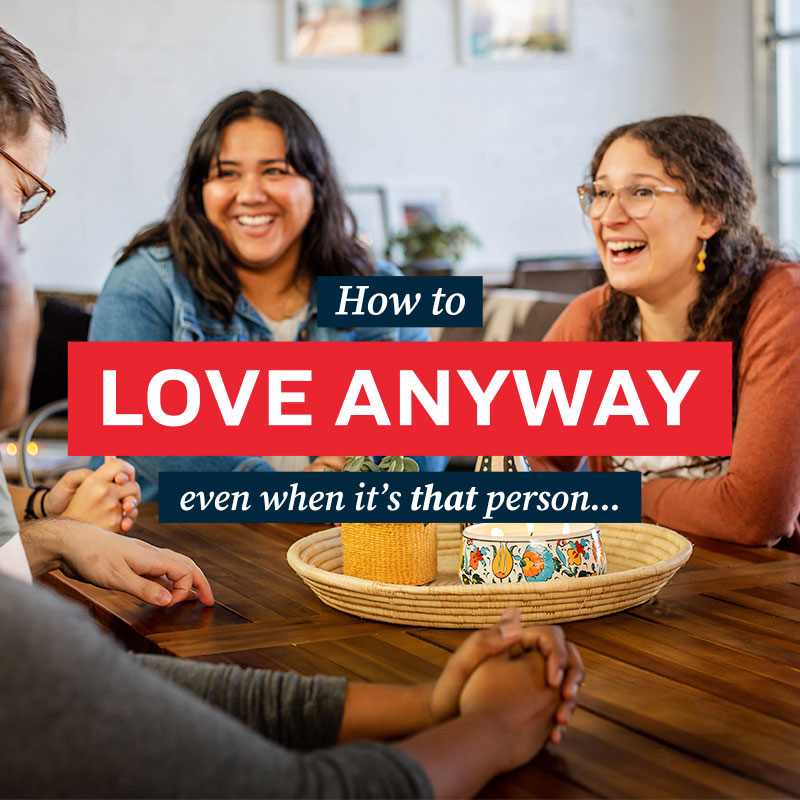 How to love anyway... even with THAT person