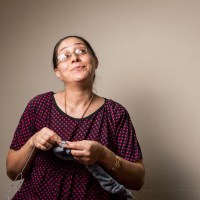 Khadija sits cross-legged on her living room floor, a cup of strong coffee at her side. She works quickly, stitches filling up the length of her knitting needles. She is pregnant with her third child, and she is making the sweetest little baby sweaters.

These sweaters aren’t for her baby, though. They’re for yours.

“When this project is over, I’m going home,” she says. “I’m going to have my baby with my mother.”

Khadija, a Syrian refugee living in Iraq, has a new motivation to grow her business. She imagines going home to her family in Syria when she gives birth to her third child—and come January, that’s exactly what she’ll do. She is so excited that she won’t have to walk through this time alone.

If you gave the gift of chickens or sheep from last year’s Gift Catalog, you might remember receiving a little crocheted ornament. Maybe you’ve already brought it out again and hung it on your tree this year.

That ornament was made by Khadija. Last year, we were able to help transform her knitting skills into income for her family—in the form of those beautiful little ornaments.

This year, we are partnering with her in a new way as she dusts off her business skills. Khadija is a hard worker, but she’s also good teacher and a natural manager. She can easily imagine how she can transform effort into profit.

In Syria before the war, Khadija worked from home, hand-embroidering garments for a local factory. There was more work than she could handle alone—and not enough workers as skilled as she was at needlework. So Khadija reached out to other women in her community, taught them to embroider, then hired them to work for her.

Khadija then moved to Libya, to try her hand at business there. Skilled in hair dying and threading, she opened her own salon. Local women, eager to learn the craft, paid Khadija to teach them. She chose the best of her students to work in her salon. Despite the startup expenses, Khadija quickly began to earn a good living. But less than six months into the venture, the bottom fell out. War broke out among the Libyan tribes, she was forced to flee back to Syria, and then on to Iraq. 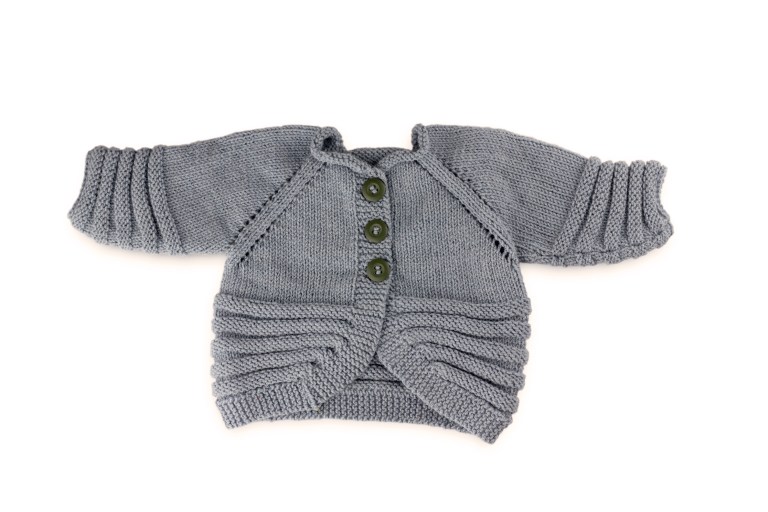 When we began to discuss projects we could work on together for this year’s Gift Catalog, Khadija was ready to try something new. She wants to create work opportunities for other displaced women in her circle, as well as a business opportunity for herself. She said ‘yes’ to every hand-craft project we proposed. Then she formed an eight-woman co-op to fulfill orders. Khadija trains and supervises the women who make washcloths and crocheted ornaments, while Khadija knits the more complicated baby sweaters.

Each sweater represents so much more than a warm garment for one child, and the labor of one woman. In every sense, these classic sweaters are future-focused.

Every sweater purchased impacts the income of nine women, encourages Khadija to continue  flexing her business skills, and gives her the means to return home to Syria to have her baby.

Every sweater allows Khadija to invest the money she earns knitting them for your tiny loved ones, into providing her own new baby a love-soaked start in life.

Khadija has survived not one but three separate war zones in her lifetime. She dreams of home—and you can bring her and her unborn baby one step closer to that dream.

Help refugees create the life they dream of.